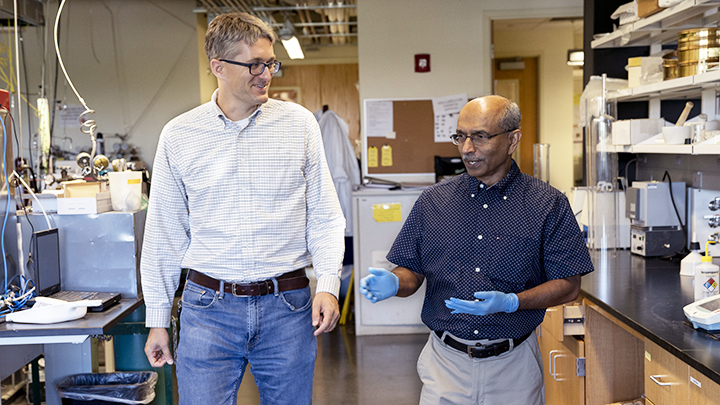 USF scientists are taking the lab to the landfill, refining a groundbreaking process that uses trash to make liquid fuel.

Across the United States, more than 3,000 active landfills are producing a potentially valuable, but often unutilized resource – biogas. A byproduct of the decomposition of biomass (e.g. food waste, lawn clippings, agricultural waste), biogas is generally made up of methane and carbon dioxide. Once collected, researchers are able to chemically convert the gas into a sustainable form of diesel fuel, which can then be used anywhere traditional fossil fuels are used.

While the idea of utilizing garbage as a power source is nothing new – think Doc Brown’s DeLorean in Back to the Future – efficiently creating liquid fuel from common wastes would represent a big step forward. 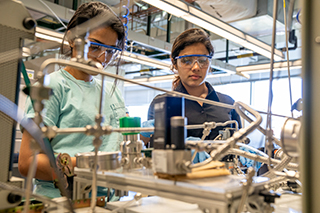 “There are many ways to take biomass and convert that to energy forms,” Professor Babu Joseph, in the department of chemical and biomedical engineering, says. “The most popular form right now is to burn the waste and produce heat.

Then use the heat to produce electricity. But what we’re trying to do is to make liquid fuels out of this biomass that can be used anywhere for anything.”

Joseph, along with Associate Professor John Kuhn, the project’s principal investigator, are leading this research effort at USF. The pair were recently awarded a $1.8 million grant by the U.S. Department of Energy (DOE) to further their past work in the field. The grant is part of a DOE research and development initiative aimed at improving bioenergy technologies. Its overall goal is to reduce the cost of bio-based fuels, making them a more economically viable alternative for consumers.

USF’s biogas conversion research is one of the projects showing promise in reaching this goal while also utilizing an available resource. According to the DOE, roughly 1 billion tons of biomass are produced annually, providing a renewable supply they say could replace roughly 30 percent of the petroleum consumption in the U.S.
The catalysts, developed by the USF team to spur the conversion, are designed using transition metals and metal oxides.

For Joseph and Kuhn, the trick is developing a more efficient conversion process. Currently, researchers use a specially designed catalyst to reform the methane/CO2 gas into carbon monoxide. Then, they’re able to use a separate catalyst to convert the carbon monoxide into diesel fuel.

“Presently, both steps require individual catalysts,” Kuhn says. “But, thanks to support from this grant, we’re trying to combine the two to accomplish both steps through a single process, making the entire method more efficient and feasible to be scaled up.”

Researchers say the benefits of this work are two-fold. Not only are they able to produce sustainable fuel, but harmful greenhouse gases from landfills and other anaerobic digestors are kept out of the atmosphere and used to create an alternative fuel source for people across the country.