BayMade Players come from within a 100-mile radius of USF’s Tampa campus. The Bulls’ all-time leading tackler, Auggie Sanchez, from St. Petersburg, and Nigel Harris, from Tampa, celebrate a War on I-4 victory. [Photo: USF Athletics]

IT WAS THE FOUNDATION of USF’s initial strategy when Coach Jim Leavitt jokingly proclaimed that his recruiting budget consisted of a tank of gas. It was the realization of success when local players comprised many key positions on USF’s highest-ranked teams. And it’s how Coach Jeff Scott plans on lifting the Bulls to the next level.

BayMade — defined by the Tampa Bay area in a 100-mile radius from USF’s Tampa campus.

“I couldn’t imagine being in a better place,’’ Scott says. “We’re living in paradise. Everybody wants to be here. Every college football program in America knows about the level of high school football in the Tampa Bay area. And those players are right in our backyard." 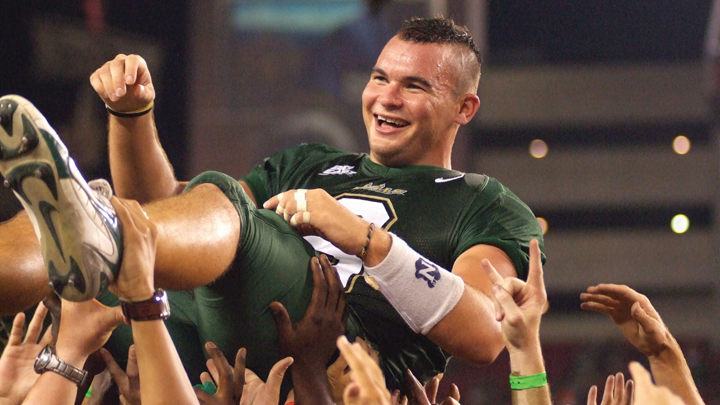 Lakeland native Matt Grothe became a fan favorite in a standout career as the Bulls quarterback from 2006-09. [Photo: USF Athletics]

“I’m really happy I stayed home to play for USF,’’ says former Bulls quarterback Matt Grothe ’09 (Lakeland Lake Gibson), who now lives in Wesley Chapel. “My family and friends saw me play all the time. This is where I made a name for myself. I still get stopped by people who want to buy me a drink or sit down and talk. It blows my mind. That’s what happens when you play for the home team."

Local players have always been key to USF’s biggest accomplishments.

“It was a blessing to stay home,’’ says former USF safety J.R. Reed ’05, from Tampa’s Hillsborough High, a five-year NFL veteran who played in Super Bowl XXXIX. “I made a quick adjustment and focused on my studies. A lot of guys who went away to college didn’t make it in the NFL and I did. It doesn’t matter where you go. It matters what you do while you’re there."

Reed is one of 15 USF lettermen who attended Hillsborough, the high school that has produced the most Bulls. Tampa’s Plant High and Bradenton’s Southeast High each produced 11 USF players, while Tampa’s Jesuit High has 10.

Others: Miami’s Central and Punta Gorda’s Charlotte with nine each, followed by Seffner’s Armwood, Tampa’s Wharton and Miami’s Northwestern with eight each.

“Most of the relationships I have in my life came about because I went to USF,’’ says former Bulls safety Glenn Davis ’01, who attended Dixie Hollins High in St. Petersburg. “My people knew where I was and got to keep up with me. It’s probably the best decision I have made."

Davis initially signed with Purdue University, then returned home to play for USF’s new program in 1997. He got USF’s first-ever interception in the initial game against Kentucky Wesleyan. 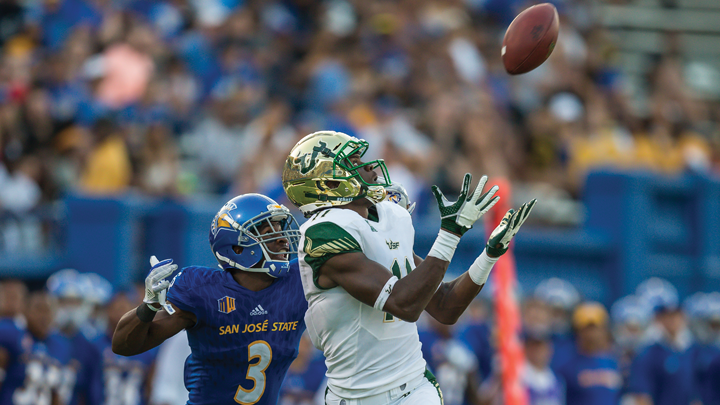 St. Petersburg native Marquez Valdes-Scantling set a USF record in 2017 before going on to play for the Green Bay Packers. [Photo: USF Athletics]

Wide receiver Marquez Valdes-Scantling ’17, from St. Petersburg’s Lakewood High, thought he wanted to leave Florida, so he signed with N.C. State and played two seasons with the Wolfpack. But he reversed field and transferred to USF, playing in two of the Bulls’ best seasons (21-4 combined record in 2016-17) and setting the program’s career record for average yards per reception (17.3) before getting drafted by the NFL’s Green Bay Packers.

Valdes-Scantling now has a back tattoo that features the St. Petersburg skyline, Raymond James Stadium and the USF logo.

A BayMade Bull, at that.