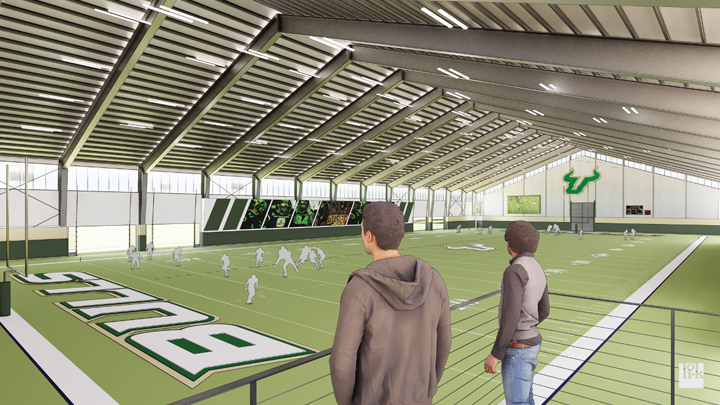 FROM THE IMPLEMENTATION and approval of its football program to planning for a new Indoor Performance Facility, USF has relied on the generosity of donors to fuel the progress.

“Without them (donors), we’re not even talking about football at USF," Lelo Prado, deputy director of athletics, says. “Their contributions were essential. To this day, we haven’t lost sight of how important they were."

Before seeking program approval from the State Board of Regents, USF was charged with raising $5 million (and $10 million over a two-year period). That initial fundraising group — known as the “First Teamers’’ — provided the necessary financial momentum.

In 2004, another milestone was achieved. An $18.2 million, 104,000-square-foot, two-story Athletics Center was opened (in 2012, it was renamed for Lee Roy Selmon). It included a Hall of Fame, locker rooms, coaching offices, an academic enrichment center and a 12,000-square-foot strength and conditioning center.

It was a far cry from the first seven years of USF football, when coaches worked in a multi-trailer complex dubbed the Ponderosa, while administrators and other coaches were located in the Physical Education Department (PED) building, which opened in 1967.

In 2011, USF christened the $4 million Frank Morsani Football Complex (adjacent to the Selmon Athletics Center), which included two full-sized grass fields, one full-sized turf field, a 40-yard turf area (suitable for drills) and a 2,500-square-foot storage building. A 2006 donation from Frank and Carol Morsani was distributed between USF Health and USF Athletics; the athletics portion of the gift was earmarked for the football practice facility and a softball stadium.

Meanwhile, plans are underway for a new $22 million Indoor Performance Facility. This 88,000-square-foot facility will be an exciting addition for all USF athletic programs. In addition, a new state-of-the-art Football Operations Training Facility is being drawn up.

The IPF is welcome news for USF football players who were often haunted by cancelled or delayed practices during to late-afternoon thunderstorms and lightning.

“Sometimes, you’re waiting for a thunderstorm to pass and you ended up losing a practice,’’ USF Vice President of Athletics Michael Kelly says. “The Indoor Performance Facility is symbolic, the next step of our evolution, but it’s also very practical and needed."

When Jeff Scott considered the USF head-coaching job in 2019, he was satisfied that Kelly and then-President Steven Currall were committed to facilities improvements.

“It won’t matter the weather, day or night, we’ll have a controlled environment where we can do our work,’’ Scott says. “You never want to get complacent about anything in competitive sports because you’ll fall behind. These facilities will be a tool to help us achieve the highest goals. We’re so appreciative of everyone who has contributed and worked to make this dream come true."