Today’s program is the result of a 40-year odyssey 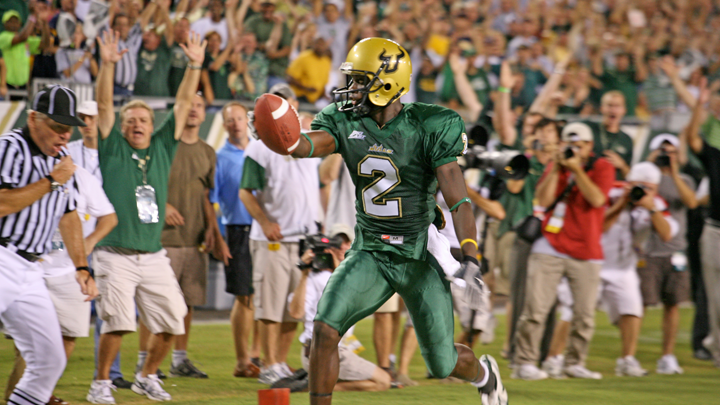 With 67,000 fans looking on at Raymond James Stadium, Carlton Mitchell scores on a 55-yard touchdown reception in USF’s epic 21-13 upset of No. 5 West Virginia in 2007. The victory propelled the Bulls to the No. 2 ranking nationally.

By Joey Johnston ’81 | for USF Athletics 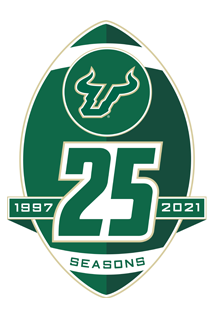 THE BIG DAY WAS SEPT. 15, 1995. USF’s Division I-AA football program was approved by Florida’s Board of Regents by a 13-1 vote (Gainesville banker C.B. Daniel, a University of Florida alumnus, voted no). It was a successful conclusion to a four-year quest.

When USF was founded in 1956, the original plans for the campus included a site for a football stadium at the intersection of Fowler Avenue and 30th Street, now Bruce B. Downs Boulevard. But USF’s first president, John Allen, said no to football and was generally anti-athletics. USF’s first intercollegiate program, men’s soccer, grudgingly debuted in 1965.

USF football, though, was a subject that never really disappeared. After decades of grassroots committees, town-hall meetings and slipshod fundraising — with that ever-present question: “Why doesn’t USF have a football program?’’ — things finally got serious in 1991.

It was on the radar almost instantly for two men — Paul Griffin, hired as athletic director in 1986, and Frank Borkowski, Life Member, who served as USF president from 1988 to 1993.

Both believed USF was poised to become one of the nation’s top 25 public universities. And both felt that football would help that cause.

At the time, USF had 33,000 students, making it the second-largest school in America, behind the City College of New York, without a college football team. Meanwhile, Tampa was the largest metropolitan area without college football (the University of Tampa dropped its program following the 1974 season).

“Every single day I was at USF, someone mentioned football,’’ says Borkowski, now retired in Banner Elk, N.C.

“There was no middle ground. Either people were all for it or they had concerns, mostly due to the costs.

“I felt the time had come to look at where USF needed to be in the 21st century. It was time to ask these questions, once and for all. Was football a necessary part of our growth? Or could we move on without it? We needed to get those answers in a thorough, logical fashion."

Following the completion of USF’s $111 million capital campaign in 1991, Borkowski appointed a 40-person blue-ribbon committee of faculty, students, community leaders and alumni to study the feasibility of USF football. Griffin, too, felt the timing was appropriate. He inherited a $650,000 athletic department debt upon his hiring, but that had been retired.

“We had to correct that first problem,’’ Griffin says. “If you can’t run an economically solvent program without football, you sure as heck shouldn’t give serious thought to adding football.

“But we stopped the bleeding. We were settled. We had success in all the other sports. USF, as an institution, was doing a lot of self-evaluating. It had identified who they perceived as ‘peer institutions’ and also the institutions they aspired to become. In every case, those institutions had a major college football program. It wasn’t a coincidence. Football was part of a well-rounded puzzle that makes a university successful, prominent and prideful."

There was significant political opposition to USF football.

Charles Reed, chancellor of the state’s university system, had reservations about a financial catastrophe. The University of Central Florida began football in 1979. Six years later, the program had rung up a $1.2 million debt. Why would USF be any different?

Borkowski says he encountered dozens of politicians and government officials throughout the state — “all Gators and Seminoles, by the way" — who were against USF football. In his office, Borkowski still has a signed football from legendary Florida State University coach Bobby Bowden with the message: “We don’t need another football team."

“I understand why some people might have felt a threat because the Tampa Bay Area was high recruiting territory for the Gators and Seminoles," Borkowski says. “USF football would cut into that. They knew, in time, the program would be successful.

“I felt football would add to the spirit on campus. We didn’t have a lot of dormitories at the time. It would engage the alumni and bind everyone together."

Ultimately, after some contentious debate, the committee judged football to be feasible at USF. But what about the finances? Griffin established a $5 million endowment goal before approval was sought, then $5 million more would be pursued. Local legend Lee Roy Selmon, a Pro Football Hall of Fame member and former all-academic student-athlete, was hired to head up fundraising efforts. 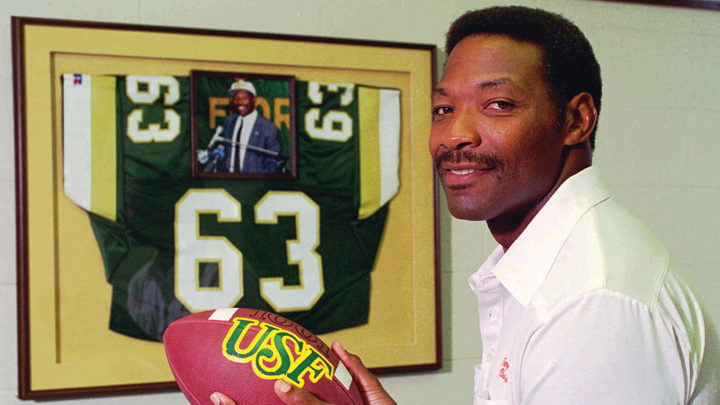 Working with a consultant, USF said it would debut at the Division I-AA level and work up to I-A as fast as community support would allow.

Finally, USF’s football effort had momentum — after a history of false starts.

A group of USF students formed The Committee for Intercollegiate Sports. It distributed hundreds of tags and bumper stickers. But after meeting with Allen, the committee disbanded after six days. The committee co-chairmen issued a statement that said, “We have come to realize that intercollegiate football and basketball at the University of South Florida is impractical at this time.’’

USF President Cecil Mackey said, “I guess I’ve come to the conclusion that if the University of South Florida wanted to get into football, it should have done it before. We just don’t have that kind of money. The time has passed. I don’t see it in the future.’’

USF President John Lott Brown allowed the Brahman Football Organization, a group of students, to start fundraising efforts. Brown said if the group raised $100,000 in five months, he would consider a Division III (non-scholarship) program. The group got $58,000 in pledges, but only $3,900 was turned into bank deposits.

By 1994, though, USF football had a sturdy plan and it was approaching the $5 million goal. Still, it wasn’t certain.

“I was getting roadblocks in Tallahassee,’’ Griffin says. “I said, ‘Betty, they’re driving me crazy. The more information I provide, the more questions they have. I answer one question and five come back. We’ll never get this going if these people don’t back off."

“She looked at me and says, ‘Is that all? I’ll take care of that.’ I never had another call from a politician or state official. Betty was the final piece of the puzzle. She cleared the path and got us across the finish line." 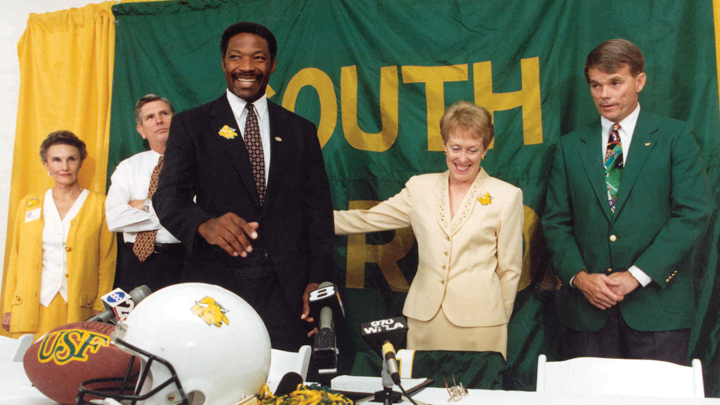 When USF’s student government voted to increase the student athletic fee, everything was in place.

“Football has helped immensely with USF’s identity,’’ Castor says. “It has helped the university grow and helped our athletic teams have a prominent conference home (from Conference USA to the Big East to the American Athletic Conference), which really wouldn’t be a possibility without football.

“I insisted on raising money to form a marching band and making sure women’s sports were secure. Well, we have a great band and USF women’s sports are thriving. I understand that many in the academic world had reservations about football and what they thought would be a financial drain. But football has helped to put USF on the map in the biggest way."

In the last two decades, Griffin has served as a consultant at various schools that have instituted football.

“They always want to know, ‘How did you guys do it?’ Griffin says. “It’s not easy. If it was easy, everyone would do it. Beyond the interest and excitement, you need resources and a commitment from the institution. No one before or since has done it like USF did. It was quite a process."

Or maybe a 40-year odyssey. 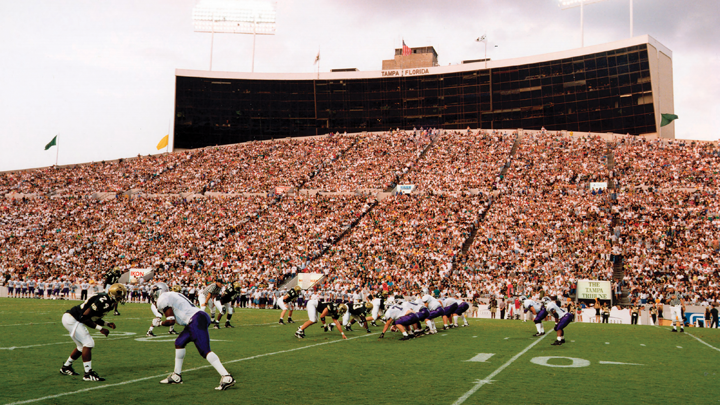 Before a sell-out crowd of 49,212 at Tampa Stadium, USF opened play on Sept. 6, 1997, with an 80-3 blowout victory over Kentucky Wesleyan. The Bulls began play in the newly constructed Raymond James Stadium in 1998. 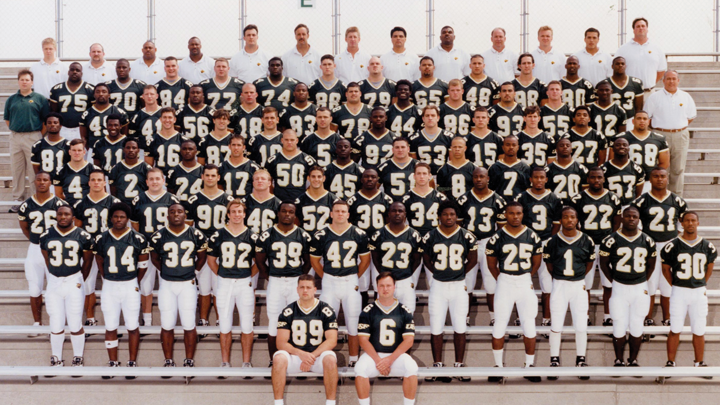 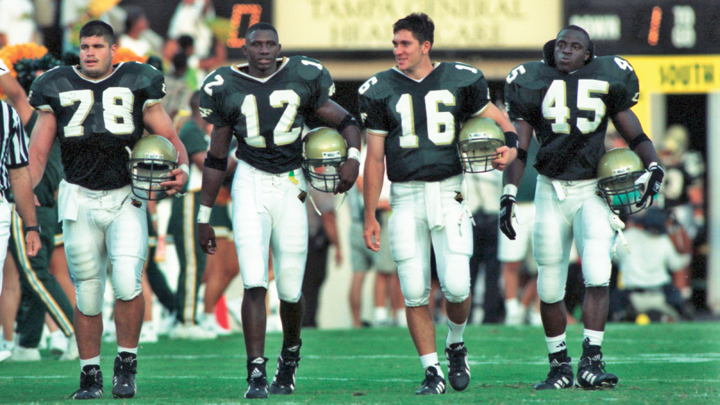 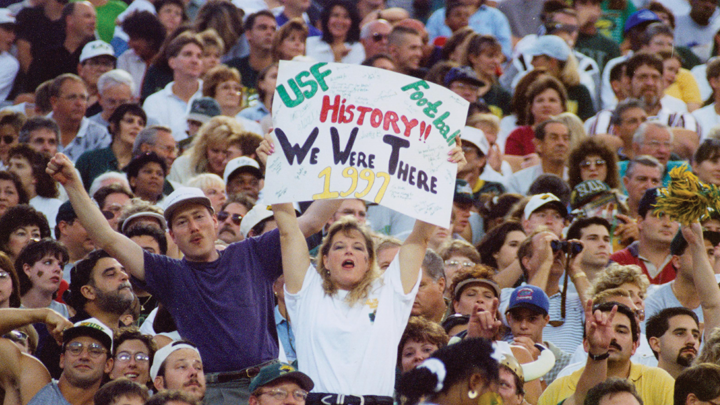