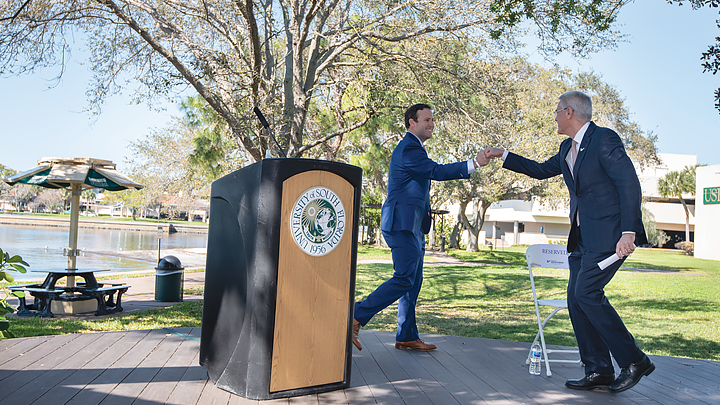 WHETHER THE TOPIC IS USF and higher education, literacy, the workforce or myriad other issues of concern to Floridians, Chris Sprowls is focused on creating opportunities.

First elected to represent District 65 in northern Pinellas County in 2014, the Palm Harbor Republican now leads the Florida House of Representatives as speaker. Sprowls continues to be a strong advocate for USF — his alma mater — and students.

“The University of South Florida — and the State of Florida – are fortunate to have Chris Sprowls’ leadership as speaker of the Florida House of Representatives,” USF President Steven Currall says. “He’s been an important advocate for USF’s policy and budgetary legislative priorities, and he has been an important partner in USF’s multi-year process to successfully unify our campuses as One USF.”

Jordan Zimmerman ’80, Life Member, chair of the USF Board of Trustees, notes, “Speaker Sprowls has continuously shown tireless support and unwavering commitment to the advancement of the University of South Florida and all of its campuses while always putting our students first. He has played an integral role in so many of our recent accomplishments and we are so proud to have leaders like him among USF’s distinguished alumni.”

Sprowls, who earned a bachelor’s degree in political science in 2006, proposed consolidating USF’s three separately accredited campuses in Tampa, St. Petersburg and Sarasota-Manatee in 2018 and shepherded the measure through the legislative process. USF began operating under a single accreditation on July 1, 2020.

Among the USF-related issues he has worked on as a legislator — including his advocacy for state funding of the new USF Health Morsani College of Medicine and Heart Institute in downtown Tampa — Sprowls believes consolidation will have the greatest long-term impact. 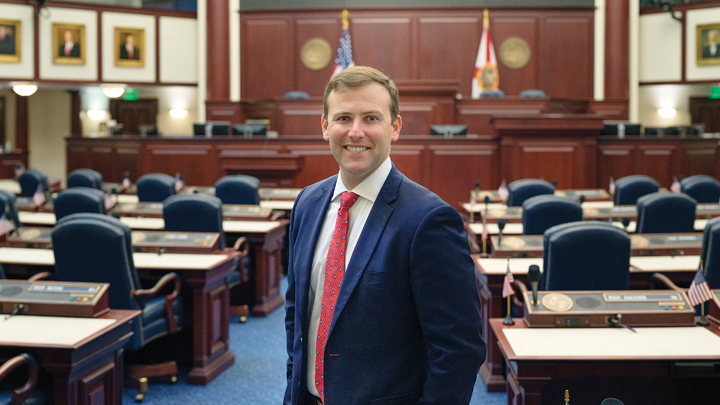 “Creating the multi-campus system, which was done well over a decade ago, was done for good reasons at the time,” he says. “By bringing the campuses together, it allows USF to work toward one vision with separate, unique parts. It creates an opportunity for all students to attend an academically rigorous, Preeminent State University where they have a wealth of opportunities to learn. It means a greater number of faculty from throughout the state and the country will flock to USF to teach and do research at a Tier 1 research institution.

“It isn’t the most glamorous thing when you’re talking about a united accreditation. It isn’t something people stand up and cheer about. But in the long term, it will be the thing that will truly have the most significant impact on the success of the university.”

Raising the prominence of USF in Florida, nationally and internationally is among the keys to growing the Tampa Bay region’s economy.

“That creates opportunities for businesses to come here because they realize the talent is here, which benefits their recruiting,” Sprowls says. “USF and the business community play a role in ensuring we have the ability to incubate small businesses and tech start-ups that can blossom and stay here.”

He cites Cincinnati as an example of how a community can nurture businesses. The city is home to a number of Fortune 500 companies, including Kroger, Procter & Gamble and Fifth Third Bancorp.

“Cincinnati has a large concentration of Fortune 500 companies because that’s where they started,” Sprowls says. “The Tampa Bay region needs to be a place where people come to start their business, not just move their business.”

Education at all levels is critical to Sprowls. During his inaugural address as speaker last November, he proposed the New Worlds Reading Initiative. This would be the first statewide program in Florida to deliver free books to elementary school students identified as struggling readers. Legislation that is currently pending calls for an organization to administer the program statewide and contract with a book distribution organization to deliver books to eligible students. Support materials would be provided to parents to help them engage with their children in reading.

Participating school districts would work with local organizations that raise awareness and funds for the book distribution program. The legislation directs the state organization to provide 50 percent of the program cost, with the remaining funds generated at the local level.

“The most important sign of a healthy community is a healthy family,” Sprowls says. “One of the things I’ve said in the legislature is that we can’t always make sure a child is born into a family that loves them or make sure that they have an easy upbringing. We can make reading a priority. If a child can learn to read, that opens possibilities for their future that they never would have had before.”

While Florida has done well compared to other states in terms of students reading at a fourth-grade level — fourth in the nation — Sprowls maintains that the state must do better.

“The reality is that if we continue current trends for closing the achievement gap, it would take 230 years before every child is reading at grade level,” he says. “Eighty-eight percent of third graders who don’t read at grade level don’t graduate high school.”

The legislature recognizes that Florida is at “an inflection point,” Sprowls says.

“If children read at grade level, they are more likely to graduate high school, get a job or pursue higher education, be more prosperous,” he adds. “All of those come from reading at grade level, and that’s something we can impact. I want to ignite a passion for reading in our children as they begin elementary school and that we continue that commitment to reading and literacy throughout K-12 education.”

An education of a different kind — that which comes from adversity — is something Sprowls encourages today’s USF students to embrace.

“Challenges and adversity are your friends, not something to be shied away from,” he says. “When you talk to most successful people and ask them to describe something they place the greatest value on, that was the best thing they did, chances are they’ll tell you about something that was extremely difficult for them to do.

“When it comes to the university setting, find people to challenge you intellectually, who think differently, and engage them in a free exchange of ideas. Facing adversity in academic life will help you be successful in life more generally.”

Sprowls knows something about adversity. During his senior year of high school, he was diagnosed with Hodgkins’ lymphoma and went through eight months of chemotherapy.

“Having that experience allowed me to recognize a major challenge and the benefits of experiencing it,” he says. “Let’s be honest — most people might not experience cancer, it also could be a terrible tragedy, a difficult upbringing — each of us has something and the question is how we handle it.”

Some of the lessons he learned came from people he was around during his treatments.

“Since I was so young, I was usually around people who were much older, and they were willing to share their stories, their courageous moments,” Sprowls says. “That experience allows you to understand that sometimes you can borrow courage from other people. We all have difficult moments and when others are facing adversity, it’s also important that we allow them to borrow courage from us.”

Many valuable lessons come from engaging with others. Yet today, thanks to technology and social media, “we’re engaged all the time and yet not at all,” Sprowls says.

“If I could go back to my younger self, my time as a student, I’d try to be more cognizant of the fact that engaging with people, living in the moment, is a richer experience,” he says. “I would ask today’s young people — ‘do you feel so much better after spending an hour on Facebook? Do you feel more energized about life?’ If the answer is no, why are we doing it? I’d encourage students to avoid having their computers open or their phones on during class. Block off time to be totally engaged.”