Q&A With an Expert 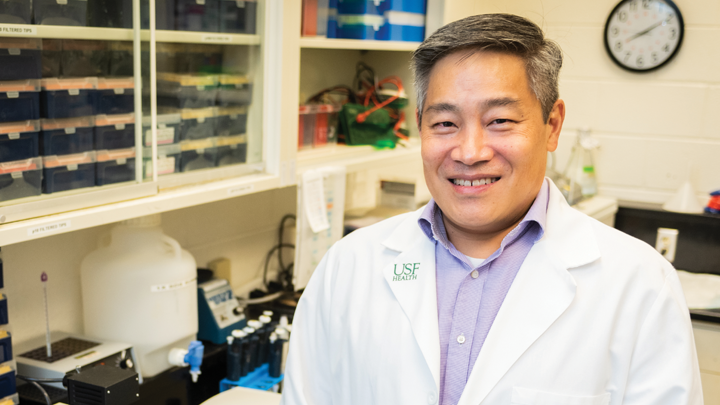 THE RACE FOR A COVID-19 VACCINE BEGAN when Chinese scientists published the genetic sequence for the SARS-COV-2 virus on Jan. 11, 2020 – a full two months before the World Health Organization declared the novel coronavirus outbreak a global pandemic. Less than a year later, the U.S. Food and Drug Administration approved two vaccines for emergency use within a week of each other (Dec. 11, 2020 and Dec. 18, 2020). Shortly thereafter, the initial COVID-19 vaccine distributions began in the United States. Both these frontrunner vaccines – the first made by Pfizer and its partner BioNtech, and the second by Moderna – are based on new messenger RNA (mRNA) technology.

“As someone who has worked on vaccines for decades and studied RSV (respiratory syncytial virus), which still has no vaccine 60 years after its discovery, I’m excited about the tremendous achievement of this new mRNA technology,” said USF Health virologist Michael Teng. “It’s been an incredible story to watch unfold – just 11 months from identifying a new pandemic virus to actually getting a safe and effective frontline vaccine.”

We caught up with Teng recently to find out more about the science behind the mRNA vaccines, each requiring two doses several weeks apart. He comments on some other vaccine issues as well. The following Q&A has been condensed and edited for clarity.

How do these mRNA vaccines work?

The Pfizer/BioNTech and Moderna mRNA vaccines are based on the same principle as other COVID-19 vaccines in advanced stages of development. These vaccines deliver genetic material that provides the instruction code for your body’s cells to produce a viral protein (antigen). Your immune system recognizes that viral protein as foreign to your body and mounts an immune response to protect against it. For SARS CoV-2, the antigen is the viral spike (S) protein, which is located on the outside of the virus and allows the virus to enter a human cell in order to replicate.

The Pfizer/BioNTech and Moderna vaccines use messenger RNA (mRNA) as the genetic material and encase it in a protective lipid nanoparticle (small bubble of fat) for delivery. Once inside your cells, the mRNA can be translated directly by your cells to make the crown-shaped SARS CoV-2 S. The first (priming) dose of the mRNA vaccine trains your immune system to recognize the viral protein and the second dose boosts your immunity. So, after vaccination, if you are exposed to the actual virus your immune system is ready to neutralize the virus quickly.

In contrast, adenoviral vector vaccines, such as those developed by Oxford/AstraZeneca and Johnson & Johnson (Janssen), employ a DNA gene that encodes the SARS CoV-2 S protein as the genetic material and uses common cold virus particles (rendered harmless) as the delivery system. For these vaccines, the DNA first has to get into the cell nucleus where your cells can make the mRNA coding instructions, which must then be translated into production of the spike protein.

If the mRNA vaccine uses brand new technology, how could it be turned around so quickly?

While mRNA technology is relatively new and was never approved before COVID-19, the research on vaccines using a genetic approach is not.

Both companies (BioNTech and Moderna) have been testing the application of this platform against other infectious diseases and cancers for several years (i.e., Moderna has worked on mRNA vaccines for Zika and the flu). But, until now, none of the mRNA vaccines or therapeutics have made it through advanced clinical trials.

The challenge has been delivering the mRNA, which is very unstable, to its target human cells without the vaccine being degraded too quickly by the body’s naturally occuring enzymes. You want to make sure the mRNA stays around long enough to make sufficient protein to stimulate an immune response, but not so long that it overstimulates the immune response. … Both Pfizer and Moderna found a way to chemically hide the mRNA from the immune system so once it gets into your cells it has enough time to make the viral protein needed to trigger antibodies and activate T-cell production. The mRNA never enters the cell nucleus or alters a person’s genetic makeup.

What are the advantages of mRNA vaccines?

Well, we know they are relatively safe — and 90-plus percent efficacy for a vaccine (94-95%) is really very high. That level of protection rivals what we see with the measles and human papillomavirus (HPV) vaccines. Seasonal flu vaccines are only about 50 to 60 percent effective in a good year.

Another big advantage of this mRNA platform is that it’s easy to change (mRNA coding instructions) based on the disease you are targeting. You just need to swap in the gene sequence of the protein you want encoded to produce an immune response. So, theoretically, you can easily adapt the vaccine to respond to new viruses – or even mutations of the existing virus.

What are the drawbacks?

The major drawback of the mRNA vaccines is that we have not had yet fully marketed this particular type of vaccine. So, we still do not know the long-term effects of the vaccine, or how long immunity lasts.

The mRNA vaccines are significantly more expensive than the adenovirus vaccine and others in the pipeline for COVID-19. And the cold-storage requirements (-94º F for the Pfizer vaccine and -4º F for the Moderna vaccine) may limit distribution.

SARS-CoV-2 variants recently emerged that may make the virus more contagious. Will current COVID-19 vaccines protect against the mutated virus, or will we need new ones?

It will take some time to get answers. But, it’s important to know that RNA viruses like coronaviruses mutate, or change, quite frequently. Not every mutation makes the COVID-19 virus more dangerous or contagious; most have no effect, and others may even weaken the virus. Also, there are several sites (epitopes) on the SARS CoV-2 S protein that are recognized by antibodies. It is likely that multiple sites would have to mutate for the virus to escape the immune response from the vaccines. The current vaccines should cover the newly emerging 20B/501Y.V1 variant originally identified in the UK that has recently been found in Florida.

The bigger question is if we can vaccinate everyone within the next year, or year and a half. How much pressure will that put on SARS-CoV-2 to develop variants that escape immunity? It could happen; I don’t think this virus is going to magically disappear.

The most recent study I saw indicated that natural immunity to other coronaviruses seems to last about three years. The COVID-19 virus may become endemic like these other human coronaviruses that cause the common cold. That means you might need to return for a booster providing better immunity against new viral protein mutations — kind of like we do with the seasonal flu vaccine, which changes a little each year.

Would you get one of these first COVID-19 vaccines?

Absolutely, I’ll get vaccinated as soon as I can.

Most short-term side effects are in line with other established vaccines we’re familiar with – including injection site soreness, muscle stiffness, fever, headache, maybe some chills. These symptoms may occur more commonly with the second dose when your immune system is ramping up. It’s not the vaccine itself causing the side effects, but rather the routine response of your immune system to a vaccine that’s working.

The risk-benefit calculation is simple for me. I’d rather take my chances of getting a headache than being on a ventilator with COVID-19.