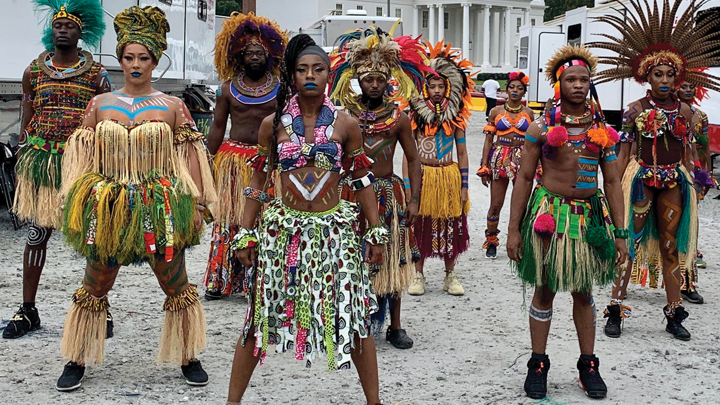 The dancers’ outfits are based upon the cultural dress of multiple African countries, like the complex beading from South Africa, the tall and wrapped headdresses from Ghana, multi-colored necklaces from the Masai people of Kenya and grass skirts worn by the Balanta people of Senegal. [Photo: Courtesy Kyaien Conner]

THOUGH AN ACCOMPLISHED PROFESSIONAL with more than 25 years of experience, Kyaien Conner knew she faced long odds – as in 499 other competitors.

Many at USF know her as a dedicated teacher and researcher in her role as an associate professor of mental health law and policy. But Conner also has been a devoted professional West African dancer since she was 14, and serves as the artistic director of Kuumba Dancers and Drummers, a cultural mainstay in Tampa since 1980 and one of the oldest such troupes in the nation.

Conner is among those who have achieved notoriety across the country for community-based work in African dance and knowledge of the culture, which is why she was among 500 people invited to audition for roles as African dancers in the Eddie Murphy comedy, “Coming 2 America,” the sequel to 1988’s “Coming to America.” Fatimah Robinson, choreographer for the sequel, and director Craig Brewer were determined to correct historical inaccuracies in the original film, so they opened the auditions to industry dancers and community-based dancers.

Only 10 women and six men would appear in the film, which was released in March on Amazon’s Prime Video. 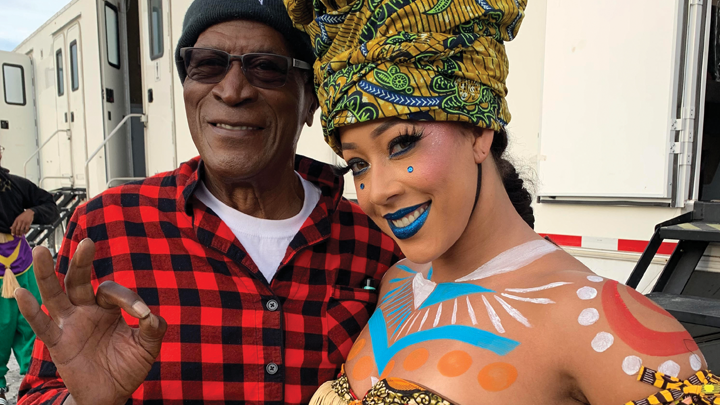 Kyaien Conner with actor John Amos on the set of “Coming 2 America.” In West Africa, drums are not only used for fun but are a way that people manage stress, pain and illness, Conner says. “It has been one of my missions to see traditional cultural healing artforms take their rightful place in the world of treatments and interventions that we recognize.” [Photo: Courtesy Kyaien Conner]

“I was so excited I was in tears when I learned I was picked to perform at the Tyler Perry Studios in Atlanta in front of Eddie Murphy, Arsenio Hall, Wesley Snipes and Morgan Freeman,” Conner says.

What she describes as “life-changing news” didn’t sink in right away.

Filming took place in October 2019 over a two-week period, half of which was spent in rehearsal, the other, on set.

“We would typically arrive on set at about 7 a.m. and would be there until almost midnight each day,” she says. “Most of the time on set was spent in hair, make-up and costume and waiting to film. And we interacted with the other performers and filled the cast members with the joy of drumming and dance.”

Conner was 8 years old when the original film came out.

“It was incredibly exciting to be able to be in a movie that was a sequel to one that was a huge part of my childhood and young adult years,” she says. “If there was any film I was going to be a part of, this would have been my dream.”

“Coming to America” was more than just a fun escape for Black movie-goers, Conner says.

“Even though ‘Coming to America’ was about the fictitious African country of Zamunda, it portrayed Africans in a way we hadn’t seen before 1988,” Conner says. “Previous movies depicted them as savages, as unsophisticated or as slaves. This movie highlighted Africans as highly intellectual and extremely sophisticated, it portrayed them as royalty. We were able to see ourselves in a new light.”

The West African dance scene in the original movie, she says, “is one of the most well-known and iconic African dance scenes in the world. In the Black community, there are ‘Coming to America’-themed baby showers, parties, even weddings. I know, because I’ve been asked many times to recreate that scene.”

While it may be iconic, the dance scene is inaccurate.

“One of the challenges of Black cinema has been colorism and whitewashing to make films appeal to the masses,” Conner says. “You can see this in the original dance scene – the dancers were fair-skinned, they had long flowing hair and they wore costumes that didn’t accurately represent any country in Africa.

“The fact that this inaccurate portrayal became the most iconic West African dance scene in the United States is shocking and frustrating,” she adds. “Being able to be part of the sequel, which did everything it could to correct those historical inaccuracies, was such an empowering experience for me as a dancer, a historian, an academic and a Black woman. Never in a million years did I think I would have that opportunity.”

“I hope I can be a role model for students looking to carve their own path in academia that all the things they love to do, they can do,” she says.