A new report details the university’s role as a catalyst for growth across the state of Florida. 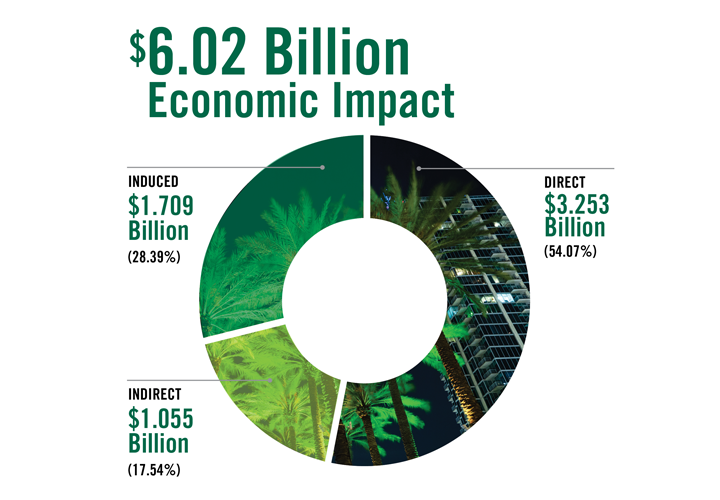 Indirect Effect: Stems from business-to-business purchases in the supply chain.

From business and job creation to addressing coastal and climate change; from responding to critical health care needs to preparing students for career success, and so much more, USF is creating opportunities throughout the Tampa Bay region.

Now, a new report details the university’s role as a catalyst for growth across the state of Florida.

Compiled by a team from the Muma College of Business, the report shows that USF, one of Florida’s largest urban research universities had an economic impact of $6.02 billion in fiscal 2019-20.

“In this report, the breadth and depth of USF’s economic impact can be seen in all aspects of the university’s operations — from the students it educates, to the faculty and professional staff it employs, to the talented professionals and entrepreneurs who power a modern innovation economy, to the construction projects that shaped the campuses in Tampa, St. Petersburg and Sarasota-Manatee,” the executive summary notes.

“Thanks to the commitment of our faculty, staff, students and alumni, and the support of our state, federal and private partners, USF is a powerful engine of prosperity across Florida,” USF President Rhea F. Law says. “By graduating students who are career-ready, generating knowledge that addresses our most pressing issues, and fostering more inclusive communities, USF is contributing to the vitality and vibrancy of our region and state.”

Among the report’s key findings:

Across USF’s three campuses and throughout Florida, faculty, staff, students and alumni are making a positive difference. The stories on the pages that follow illustrate in human terms the many ways USF is creating opportunities throughout the region and state.