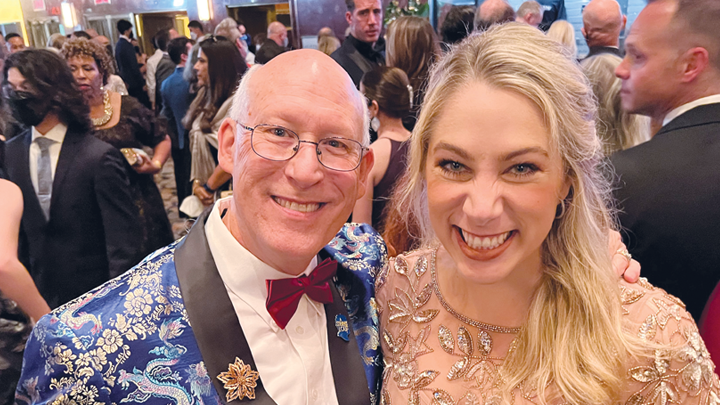 On any given day, College of The Arts Dean Chris Garvin can gaze out his office window and almost see the bright lights of Broadway. The fabled stages of Midtown Manhattan, heart of endless hopes and dreams, lie 1,200 miles to the north. But lately, they’re casting a glow directly on Fowler Avenue and USF’s Tampa campus.

Consider that four USF alumni are taking their bows in a collective show of talent on the Great White Way:\

“For me, the really exciting part about how well we’re doing on Broadway is the diversity,” Garvin says. “You look at Matthew Lopez, who is a Latinx artist, or Quentin in the MJ story, which is a pop musical, and then to Strange Loop, backed by Steve Fessler — it’s such an important story for the world right now.”

Darrington, whose Broadway credits include “Ragtime,” “Cats,” “Once on This Island,” as well as “MJ the Musical,” finds it thrilling to see so many USF alumni making their marks.

“When I can see a fellow Bull really shining bright and making a national and global impact, it just does my heart proud,” he says, “because my days at USF will never be forgotten and are still one of the brightest spots of my entire life and career.”

In Garvin’s eyes, this wave of USF graduates wowing Broadway audiences puts the talent-rich College of The Arts programs center stage — not just theater, but music, dance and art, too. And it’s not only students taking Manhattan but also talented faculty who are artists in their own right, such as art professors Sue Havens and Ezra Johnson, who had summer exhibitions in New York City.

“The future of the arts is interdisciplinary,” Garvin says. “My vision is for the College of The Arts to hold a place of national and global prominence because we do have that kind of talent and reach. Theater is just what’s hitting right now in a major way.”

“Look, being part of the Tonys is wonderful, and it’s exciting to think we’ll have a statuette sitting at our house,” he says. “But truthfully, when I die, that Tony Award is just a piece of metal that needs to be dusted. If I haven’t done some good with that, it doesn’t mean anything to me. So I’m more focused on my mission making something of the things that need to be changed in this world. And I believe that the arts are the great equalizer of our community and a reflection of our society. What really matters is whether you are uplifting people and raising awareness.”

That’s why Fessler says, for instance, that he would like to bring cast members from “A Strange Loop,” with themes such as “it’s OK to be gay, it’s OK to be sad, it’s OK to be trans” — to USF to talk to the university community.

He also stresses that too much emphasis is placed on Broadway as the ultimate measure of success. “Some people are absolutely talented yet never make it there,” Fessler says. “Some amazing artists never exhibit in the Museum of Fine Arts in New York. That doesn’t mean they’re not great.

His point: Nurturing emerging artists can make a powerful difference for generations to come. Artists like Sook and Darrington are prime examples. They found their support in USF’s outstanding arts education.

“I searched around for the right school, and why USF really spoke to me is because it was an art program that didn’t try to shape you into a cookie-cutter,” says Sook, who studied acting, dance and voice at USF. “The college didn’t try to make me fit into its idea of what an artist looks like. Instead, it made me into the best version of an artist I could be. And that’s the greatest thing that could have happened to me. I discovered a different side of myself as an artist who could make a career at this.”

Darrington found his direction as well. “My experience at USF began to show me the reach of theater, beyond the walls of the theater itself,” he says. “That’s how I started developing a purpose. Yes, it has always been important to learn technical skill. But what’s important, and what I teach today, is purpose. I had to learn that the arts are a service we give people — to love, to encourage, to motivate and to challenge. And that journey began at USF, where theater blossomed for me and became far more than just acting.”

That’s precisely the goal, Garvin says. “We’re providing the kind of education that allows students to become the artists they want to be — we’re not pigeon-holing them,” he says. “And the breadth of our college is really second to none in this country in that we have all of these disciplines under one roof.”

The combined power of the college’s offerings has led him to envision a new arts hub for north Tampa, centered around the USF campus, heightening the profile of his talented students and graduates.

“People know downtown St. Petersburg and Tampa for the arts. But really, in north Tampa we are this amazing arts district — not just for the university but for the whole community,” Garvin says. “We host more than 400 events a year between theater, music, art exhibitions and lectures. So we really want to accentuate this northern district of the Tampa Bay region as being an arts hub.”

Developing a north Tampa arts district excites Fessler more than adding another trophy to his mantel. “These artists may one day teach and touch their own students,” he says. “Or their performances or works may cause somebody to change the way they think.”

Meanwhile, USF is polishing its reputation as a national-caliber training ground for the arts.

“It just shows how mighty USF is,” Sook says. “Many people think you have to go to a conservatory to get a Broadway education, for instance. But that’s not true. You have to go to a school that prepares you to be an artist and a full human being. That’s what USF does.”

And it’s happening in a big way these days at the intersection of Broadway and Fowler.