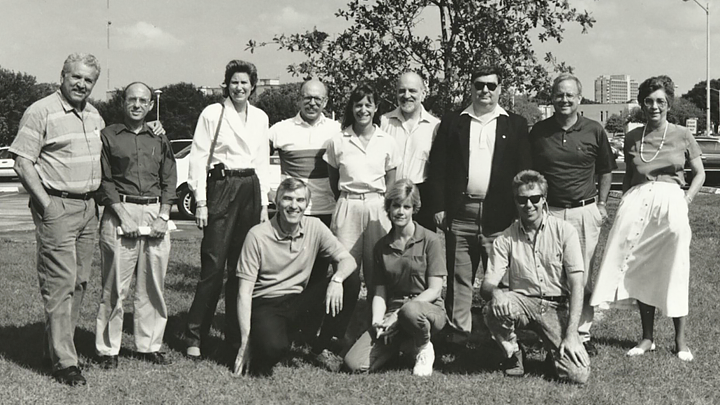 Carl Hawkins, Jr. was one of the first students to take classes in criminal justice when USF launched the program in 1972. Tuition that year was only $195 per quarter and like many in the ‘70s, he wore his hair long — down to his shoulders — with bell bottom jeans, tie-dye shirts and buffalo sandals.

When the university welcomed Hawkins and his fellow students 50 years ago, the Tampa campus also looked quite different from the grounds that students and faculty enjoy today. There were so few buildings that the criminal justice program was housed on the second floor of a nearby apartment complex and course registration was held at the USF indoor swimming pool.

“They had these bulletin boards all the way around the pool and students would pick their classes out,” says Hawkins, ’74, Life Member, who was inducted as a distinguished alumnus of the criminology program in 2012. He also holds master’s and doctoral degrees from Nova Southeastern University. Hawkins retired in 2009 as a colonel from the Hillsborough County Sheriff’s Office with nearly 35 years of law enforcement experience. He continues to teach criminology at USF on an adjunct basis.

It wasn’t long before the founders were joined by fellow faculty members Ira Silverman, Leonard Territo and Tim Riley. In its earliest years, criminal justice drew a high level of interest from veterans returning from the Vietnam War as well as current and hopeful law enforcement officers pursuing additional education.

“You want to know why people go into this field?” asks Territo, ’68 and MA ’71, who brought decades of law enforcement experience to his lectures, including his work as an advisor to the investigation that took down notorious serial killer Ted Bundy. “It’s fascinating. I’ve done so many different kinds of things, and those stories are valuable because they make the information relevant.”

As USF expanded, so did the criminal justice program. A master’s degree was added in 1974 and, along the way, the program became the Department of Criminology, with a more theoretical, social and behavioral science focus. Then, in 1998, the department became the second in Florida to offer a doctorate in criminology.

Dwayne Smith, who recently returned to the department as a professor after serving for a number years as senior vice provost and dean of the Office of Graduate Studies at USF, joined the Department of Criminology in fall 2000 to serve as chair and helped to develop the doctoral program, increasing its national exposure.

“We had a lot of discussions early on about what it meant to be a PhD program, and it wasn’t just offering more courses,” he says. “It really did involve a shift in the culture of the department. We had to have a greater level of visibility. I think it’s fair to say that department has evolved right along with the university in terms of its identity.”

Over the past five decades, the Department of Criminology has not only enriched the lives of those who have studied, taught and worked there, it has also had local, national and international impact. For example, the master’s in criminal justice administration program has attracted working professionals from 80 different agencies since its inception in 2006. From work on family interventions in the juvenile justice program to drug use prevention, to internships with regional agencies, the intersection between research and community has fostered valuable partnerships.

These relationships have also enhanced courses. Kathleen Heide, distinguished university professor and the first female tenured professor in the department, remembers working with her community connections to include guest speakers in her courses, from public figures to politicians and FBI agents, to discuss relevant legal and law enforcement issues. She introduced live demonstrations from the Hillsborough County Sheriff’s Office S.W.A.T. team and took students into the medical examiner’s building and onto death row to speak with inmates.

Today, the Department of Criminology offers a variety of undergraduate, graduate and professional training programs on multiple campuses and online. It is home to more than 1,200 students, with its graduate program ranked No. 18 by U.S. News & World Report.

“I am so proud of what this department has been able to accomplish, the faculty we have been able to employ and the incredible individuals we have had the honor of teaching,” Blount says.