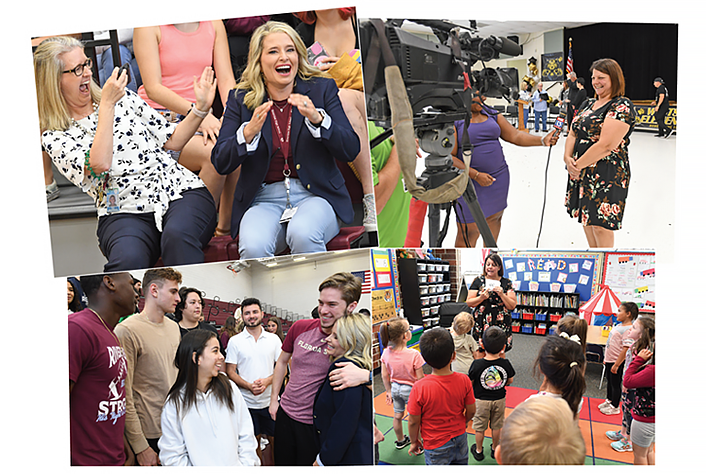 By ELIZABETH ENGASSER ’15  | College of Education

What seemed like another normal schoolday
became an unexpected red-carpet moment for two educators when they learned they’d won “the Oscars of teaching” — the Milken Educator Award.

Hernandez teaches geometry and Advanced Placement statistics. She combines practical learning with positive reinforcement and emotional support, an approach that has more than doubled the number of students enrolling in the challenging course and resulted in AP exam scores that exceed the state average.

“This whole experience has allowed me to see the impact I’m making on students,” she says. “All of those pieces of things that I’ve done throughout the years have come to this one place and I’m so, so grateful.”

In the minutes before Crisci’s name was called, she looked around the auditorium, trying to guess the recipient. It could have been any of her colleagues, she says, because they inspire her every day.

Crisci teaches kindergarten and first-grade language arts, reading and social studies. Her youngest students end the year able to write and type a full paragraph and all of her students outperform their peers countywide in assessments.

“I’m still in shock — I don’t even know how it came about,” Crisci says. “I don’t think it will really, truly hit me until I go to network with people and see what’s done at other schools and learn from other people.”

Hernandez and Crisci each received $25,000 and an invitation to join fellow recipients in the Milken Educator Network.