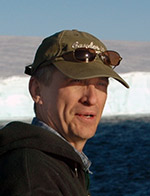 Dr. Eugene Domack (Gene), Professor in Geological Oceanography at the USF College of Marine Science (CMS), died on Nov. 20, 2017 after a brief illness.

Gene received his Ph.D. in Geology from Rice University in 1982.  He was hired at Hamilton College in 1985, after working for two years as an Exploration Geologist for Union Oil Company of California.  He joined USF College of Marine Science in 2014.  His scientific career was dedicated to the study of climate change, which he advanced through the development of international interdisciplinary programs.  He was highly recognized for his research, including awards in 2011 as Fellow of the American Geophysical Union and 2012 as Fellow of the American Association for the Advancement of Science.  His fieldwork led him all over the globe, on both land (Namibia, Australia, Greenland, Svalbard, Oneida Lake NY, and Whidbey Island WA) and sea (Chief-Scientist or Co-Chief Scientist on 15 Antarctic cruises).

His primary passion was Antarctic research and he generously shared that passion with others, including numerous students.  He captured the interest and imagination of young scholars and enabled them to experience the excitement of science first-hand.  He mentored hundreds of students throughout his career as a professor at the University of Wisconsin, Eau Claire, Hamilton College in Upstate New York, and the University of South Florida.  He left a rich legacy: many of his former students are now passing along that passion, including Ian Howat (Professor at Ohio State University and invited 2013 Eminent Scholar Lecture Series speaker at CMS), Amelia Shevenell (Associate Professor at CMS), and Matt Kirby (Professor at Cal State Fullerton).

Born in Wisconsin, Gene had a life-long love for the Green Bay Packers, Milwaukee Brewers and his alma mater, the Wisconsin Badgers.  But most of all he loved his daughter, Maddie.  Gene is survived by his wife Judi and daughter Madison, both of St. Petersburg; his mother Vivian Domack of Brookfield, WI; sister Deborah (Todd) Hill of Trempealeau, WI; brother Randy (Kasey) Domack of Holmen, WI; sister Julie (Jeff) Borkowicz of Brookfield, WI; and several nieces and nephews. He was pre-deceased by his father Benjamin and his younger brother Shawn.

Some of the most fundamental shifts in earth history have involved changes in climate state from icehouse to greenhouse conditions. Much of the work Gene is involved with revolves around understanding the changes that have taken place in Antarctica over the last glacial cycle up, to and including ice shelf disintegration of the last decade. The knowledge gained by studying the sediment facies, biotic changes, and cryosphere adjustments on the Antarctic margin, is also being applied to ongoing investigations of ancient episodes of rapid change, such as the great pan glacial events of the Neoproterozoic (the so called Snowball Earth events) and Late Paleozoic glacial sequences in the Gondwanan continents of Australia, Africa, and South America. Gene utilizes sedimentology, sediment geochemistry, and geophysics to test hypotheses related to changes in the earth’s cryosphere. Ongoing projects include studies on the Otavi Platform (Namibia), the fjord lands of East Central Greenland, and in Svalbard. Work is also being conducted in the Oneida Lake basin of Upstate New York and in the Puget Lowland of Washington State, where exceptional records of deglacial events exist, both of which span important climate intervals in the Late Quaternary.

Dr. Domack is a 2011 Fellow of the American Geophysical Union and a 2012 Fellow of the American Association for the Advancement of Science. Dr. Domack is the Director of LARISSA (LARsen Ice Shelf System, Antarctica), a National Science Foundation funded initiative that brings an international, interdisciplinary team together to address the global climate implications of the abrupt environmental change in Antarctica’s Larsen Ice Shelf System. LARISSA International Partners include Belgium, Argentina, the Ukraine, and Korea.