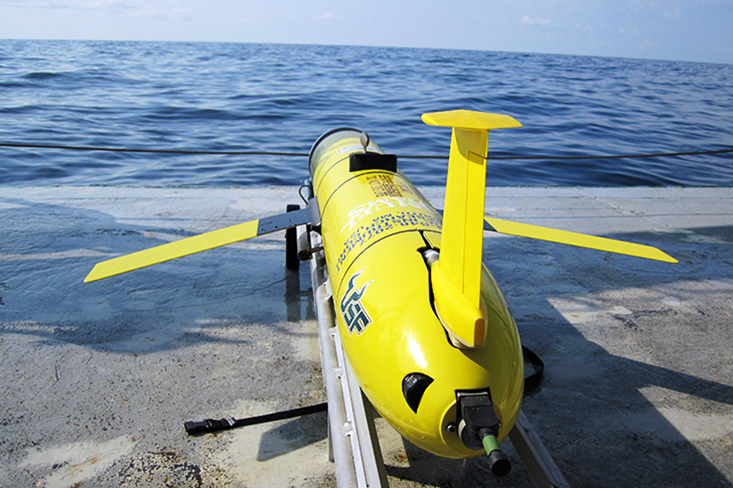 Scientists at the USF College of Marine Science deployed a glider into the epicenter region for red tides from August 24 – September 17, 2018. It measured different water properties that are proxies for red tide and helped them confirm several long-held theories about how red tides evolve.

ST. PETERSBURG, FL – Scientists fought back last summer as red tide choked the Florida west coast in what felt like a relentless stranglehold. In late August they loaded a robotic torpedo-like glider with sensors and sent it on a nearly month-long swim where they suspected the red tide began – near the bottom about 50 miles off the coast between Clearwater Beach and Sarasota Bay – to gather data about the water that fueled the tide.

It was a good move.

As a result of that mission and an arsenal of computer simulations, the team led by Dr. Robert Weisberg, distinguished professor at the USF College of Marine Science (USFCMS), uncovered new understanding about what made last year’s red tide so epic — and confirmed several decades-long hunches about how Florida’s red tides work. They reported their findings in the Journal of Geophysical Research – Oceans with long-time collaborators at the Florida Fish and Wildlife Conservation Commission’s (FWC) Fish and Wildlife Research Institute (FWRI).

“Even though we still have many questions about the complex biology and ecology of red tide, what matters when it comes to prediction is the ocean circulation,” said Weisberg, the paper’s lead author. “The physics control the biology.”

The team plugged the data from the glider into a computer model that tracks the way currents move in the Gulf, and confirmed the long-held hypothesis that red tides originate offshore and are transported to coast by subsurface currents. 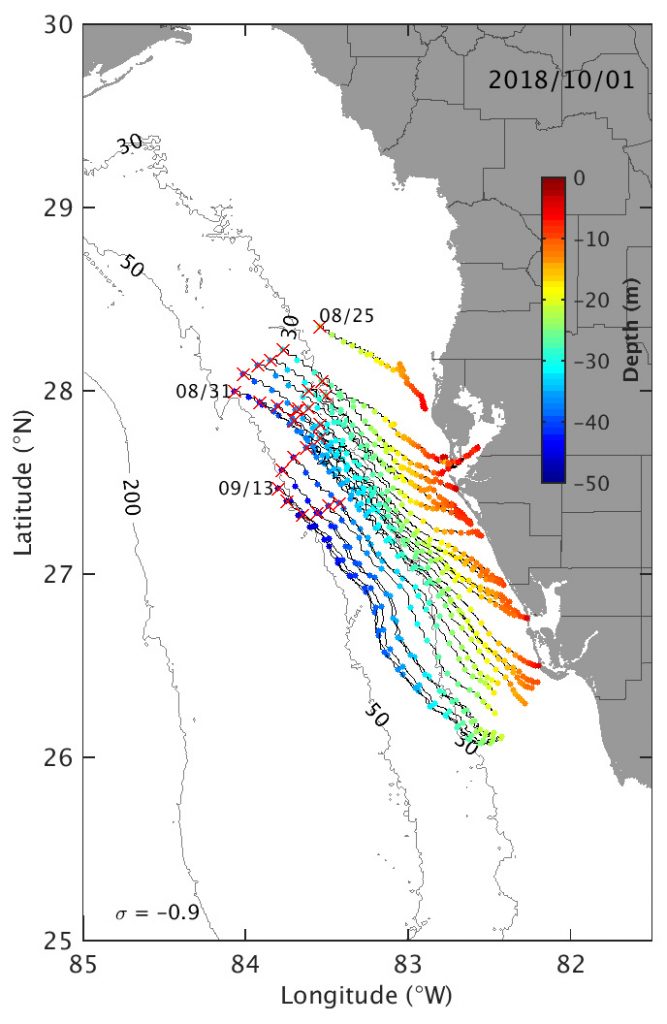 Trajectories for water particles initialized along the glider track from 24 August 2018 to 17 September 2018. The modeled trajectories begin with water particles (including K. brevis cells), marked with an “X,” near the bottom. The daily color-coding shows their actual depth as they travel towards the coast where they manifested as a red tide.

The glider picked up a high concentration of chlorophyll, a signature of the red tide algae cells, near the bottom, and the model confirmed that the physics were idea for moving the cells inshore to the area considered to be the epicenter of red tides in the Gulf: north of Tampa Bay to south of Charlotte Harbor.

Weisberg’s group has refined a circulation-based prediction scheme over several decades that they’ve used to forecast whether or not a major red tide will occur in any given year. It’s been accurate for 20 of the last 25 years. While this year was no different in the model’s predictive prowess, it was also a much more complicated chapter in Florida’s storybook of red tide events.

Goldilocks of the Gulf, and a Perfect Storm

What made last year’s bloom particularly epic was that it formed on the heels of a 2017 bloom that never ended, Weisberg said. All told, it lasted for nearly two years and claimed headlines as the worst red tide since 2005.

It blooms annually in larger concentrations about 20 to 60 miles offshore near the seafloor, usually in early spring through the summer if the water conditions are just right—making it a kind of Goldilocks of the Gulf. K. brevis will bloom, as it did last year, when it has enough nutrients to thrive, but not too many. It can also get the nutrients it needs from a spectrum of sources. 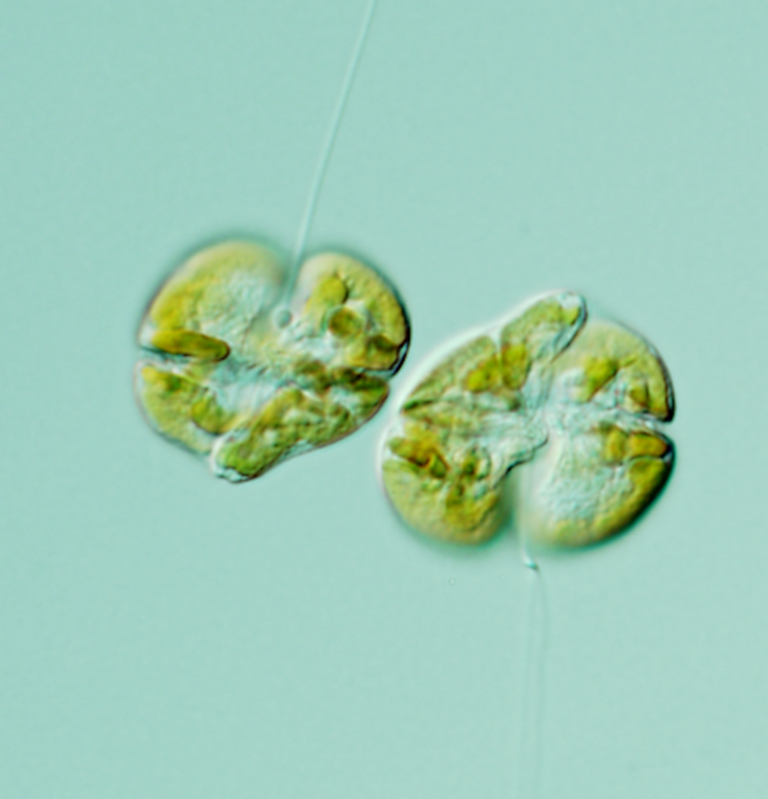 Sometimes the Loop Current and its eddies interact with the West Florida Continental Shelf in a way that causes upwelling strong enough to deliver nutrient-rich water from the deep ocean onto the shelf. When this happens, other algae will grow faster than K. brevis.

“When we see strong upwelling induced by the Loop Current during spring to early summer, we don’t get a major K. brevis bloom,” said study coauthor Dr. Yonggang Liu, who studies the physics of the ocean with Weisberg at the USFCMS.

But last year conditions were perfect for one: no strong upwelling on the shelf during spring, and the bloom formed. In the middle of July persistent upwelling did begin, too late to suppress the bloom but at the right time to ensure that what was growing along the bottom offshore was carried toward the coast. In the fall it manifested along the west Florida coast. And it was worse than most years because it joined up with red tide left over from 2017 south of Tampa Bay – effectively taking over the entire epicenter region.

There it killed fish and other wildlife and caused respiratory irritation in beach-goers. A toxin inside the algal cell causes these atrocities, and can make people sick if consumed in shellfish.

None of this surprised scientists, who have been studying red tides on the Florida west coast since the 1950s. What did surprise them was that fact that this red tide also made its way up to the Panhandle and even around to the east coast of Florida. Most stay along the Florida west coast.

The computer simulation helped them understand how that happened. In this rare event, the Loop Current and the wind-driven currents conspired to produce simultaneous red tide events on all three of Florida’s coasts.

Tropical Storm Gordon, which hit early in September 2018, temporarily disrupted the upwelling picked up by the glider and carried a portion of the red tide northward to the Panhandle. After the passage of Gordon, strong winds blew the red tide cells that had moved inshore back out to Gulf where the upwelling circulation then transported these cells to the southwest end of the West Florida Shelf, where they were “captured” by the Loop Current and carried around Florida’s southernmost point and up the east coast.

“Once it’s in the Loop Current, that feeds the Gulf Stream, it’s only a matter of days before cells can arrive in Palm Beach,” said Weisberg.

Many mysteries about Florida’s red tides remain, such as exactly how a bloom ends, and how to mitigate or control its negative effects.

“This exercise confirms the need for additional support to send gliders out monthly to do this kind of monitoring and to continue our multi-institutional collaboration on seasonal and short-term predictions,” Weisberg said.

The study was supported by NOAA’s PCMHAB and IOOS SECOORA programs as well as NASA’s Ocean Biology and Biogeochemistry program. Additional support was provided by USFCMS,  the State of Florida and by the NSF XSEDE program for high performance computing. 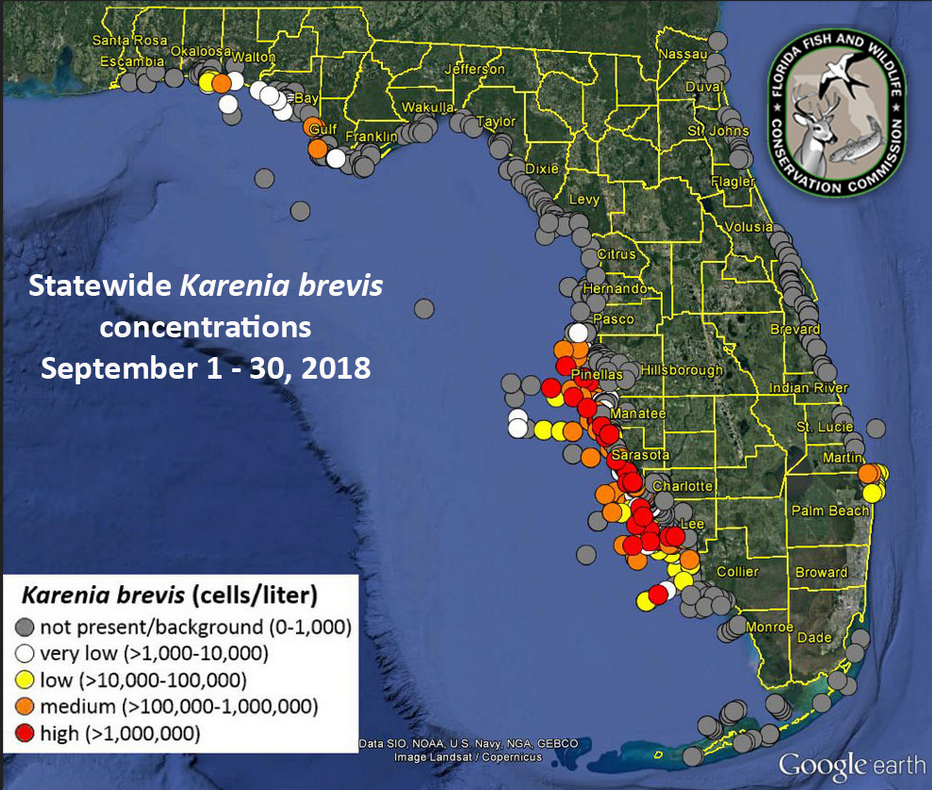 A composite indicating concentrations of the red tide K. brevis cells along all three Florida coasts in September 2018.

About the USF College of Marine Science

The USF College of Marine Science (marine.usf.edu), founded more than 50 years ago in 1967, is one of the top ten marine science programs in the country. Offering Ph.D. and M.S. degrees, it leverages an annual research budget of about $20 million to foster innovation and understanding in biological oceanography, physical oceanography, geological oceanography, chemical oceanography, and marine resource management. The USF College of Marine Science (USF CMS) is also a leader in the public understanding of science, and has been the lead institution of global research program developed in response to the Deepwater Horizon oil spill, the largest in history. It serves as a major research and economic engine for the St. Petersburg Innovation District and sits at the heart of one of the largest marine science hubs in the country that also includes the USGS St. Petersburg Coastal and Marine Science Center, the NOAA National Marine Fisheries Service, the Fish and Wildlife Research Institute, the Florida Institute of Oceanography, SRI International, the Tampa Bay Estuary Program, and the US Coast Guard.