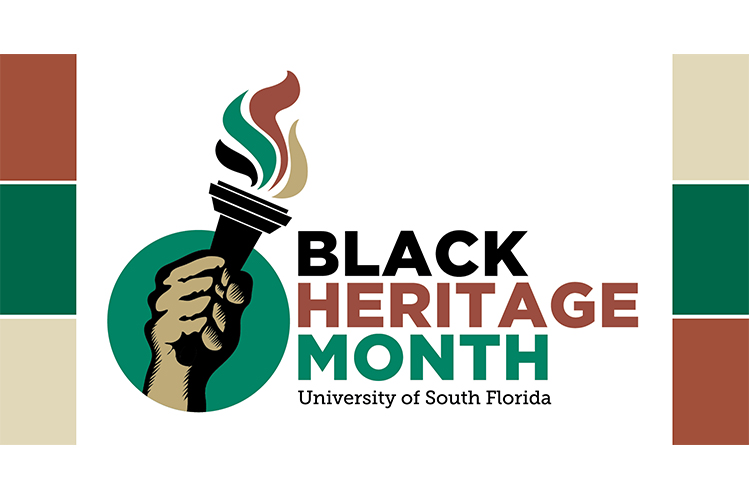 Starting in 1926 as a week-long observance of African-American progress and impact, Black History Month is now an annual fixture across the U.S. and a time of reflection and celebration at the University of South Florida.

A champion of diversity and inclusivity, USF’s Black Heritage Month is designed to educate both the university and Tampa Bay communities on the importance of the history and significance of Black culture, according to the Office of Multicultural Affairs. Black Heritage Month provides an educational atmosphere for students, staff, faculty and alumni to celebrate and commemorate the contributions the black community has made to society.

Throughout February, numerous clubs and organizations across campus will hold a variety of events to celebrate Black Heritage Month.

Over the years, USF has continued to be a national model for attracting and retaining diverse students, faculty and staff. It’s been a purposeful effort that has helped the university become one of the most diverse institutions in the country. These are just a few of the notable events and accolades USF has received.

USF Admits First African-American Student in 1961
Ernest Boger, a graduate of Blake High School in Tampa, became USF’s first African-American student when he enrolled at the university in 1961. Boger, now the chair of the Department of Hospitality and Tourism Management at the University of Maryland Eastern Shore, was interviewed by USF Libraries in 2003 for inclusion in the university’s historical archives. USF Recognized as #1 in Florida and #6 in Nation for Black Student Success
USF was recognized as a top-performing university — number one in the state of Florida and sixth in the nation — for eliminating the completion gap between black and white students, according to a 2017 report released by The Education Trust.

Helios Awards $2.1 Million Grant to Support Black Leadership Network Scholarships
In 2018, the Helios Education Foundation awarded USF’s Black Leadership Network a $2.1 million grant to support the future success of underrepresented students from across the USF System. The grant is divided into two parts, establishing a $2 million scholarship endowment that will provide future support for 40 students per year in perpetuity, and also contributes $100,000 immediately for scholarships, mentoring and leadership skills programming to help students graduate faster, better prepared and with less debt.

A Story of Triumph
At 81 years old, Geraldine Twine has spent as much time in hospitals as she has in her home. Not due to sickness, but a calling from a young age. She had always been a nurse at heart – a gentle person with a natural sense of caring and compassion, but it wasn’t until she moved from Tallahassee to Tampa, Florida that she found a program that would allow a black woman – like herself – to train to become a certified nurse.

USF Earns National Recognition for Increasing Diversity in Study Abroad Programs
The University of South Florida earned a national award for its strategic focus to increase the number of minority and multi-racial students who participate in study abroad programs. Since launching the USF Education Abroad Inclusion Initiative in 2014, the program has generated a 55 percent increase in black student participation.

USF National Pan-Hellenic Plaza
USF is home to the new National Pan-Hellenic Council Plaza, featuring nine elevated plaques which represent each of the historically black Greek-letter organizations that comprise the NPHC. USF is the only Preeminent institution in the state and the first non-Historically Black College in Florida with this type of physical representation.