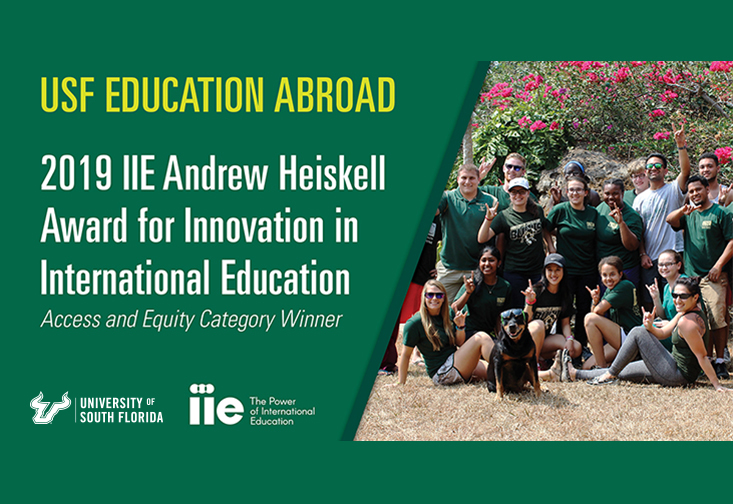 The University of South Florida has earned a national award for its strategic focus to increase the number of minority and multi-racial students who participate in study abroad programs. USF was selected from 1,300 eligible colleges and universities around the country as the recipient of the 2019 Institute of International Education (IIE) Andrew Heiskell Award for Innovation in International Education, in the category of access and equity. The award, announced this month, is given in recognition of innovative programs and services that make study abroad and international programming accessible and equitable for a broader student population, with a special emphasis on specific efforts that led to a strong increase in study abroad participation.

“What makes this accomplishment even more noteworthy is the fact that the racial, ethnic and socioeconomic distribution of study abroad students mirrors that of our overall student population,” emphasizes USF Provost and Executive Vice President Ralph Wilcox. “We are extremely proud of our track record in supporting diversity among our study abroad student population, of the access we are able to provide to our students, and of our innovative approach to embedding curriculum offerings that have opened study abroad opportunities to a new population of students along their pathway to academic and career success.”

The USF Education Abroad Inclusion Initiative is a system-wide endeavor to increase participation in credit bearing international experiences by students who are traditionally under-represented in study abroad programs, including minority, Pell Grant-eligible and transfer students.

In recent years, USF has also received national recognition for eliminating the achievement gap by race, ethnicity and socioeconomic status, a rare achievement in higher education.