USF alumnus Ivan Pineda has been recognized by the Charles B. Rangel International Affairs Program as a 2020 Rangel Fellow. Pineda is the third Rangel Fellow in USF history. Pineda is one of only 30 fellows selected this year from hundreds of applicants representing institutions across the United States.

Honoring distinguished Congressman Charles Rangel, this prestigious graduate fellowship aims to promote greater diversity and excellence in the Foreign Service of the U.S. Department of State. Fellows receive $37,500 annually for a two-year graduate degree in a field of their choice related to the Foreign Service, paid summer internships with a member of Congress in Washington, D.C. and at embassies abroad, professional development training and mentoring from senior Foreign Service Officers. 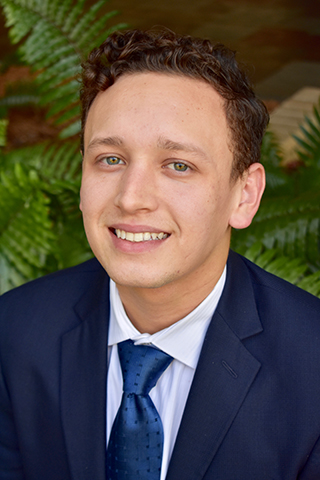 In summer 2017, Pineda studied Chinese at the American Council’s Taiwan Intensive Summer Language Program with support of the Freeman Asia Scholarship and the Fund of Education Abroad Scholarship. The following summer, he was selected for the Critical Language Scholarship program in Dalian, China. This robust training in Mandarin language prepared him to undertake his Honors College thesis that explored transnational issues affecting politics and economics driving Chinese investments in renewable energy sectors in Italy and Brazil. Pineda currently teaches English, American history, music, and entrepreneurship in Kunming, China.

As a Rangel Fellow, Pineda plans to pursue a master’s in Public Policy with a concentration in Political and Economic Development. He plans to work as an economic officer in the Foreign Service, to build and maintain positive economic, trade, and other commercial interests between the U.S. and host governments and local business communities.

Pineda worked with Lauren Bartshe-Hanlen at USF’s Office of National Scholarships in preparing his application. Students who are interested in applying for the Rangel Fellowship or similar awards in the future are encouraged to contact the office by visiting their website.