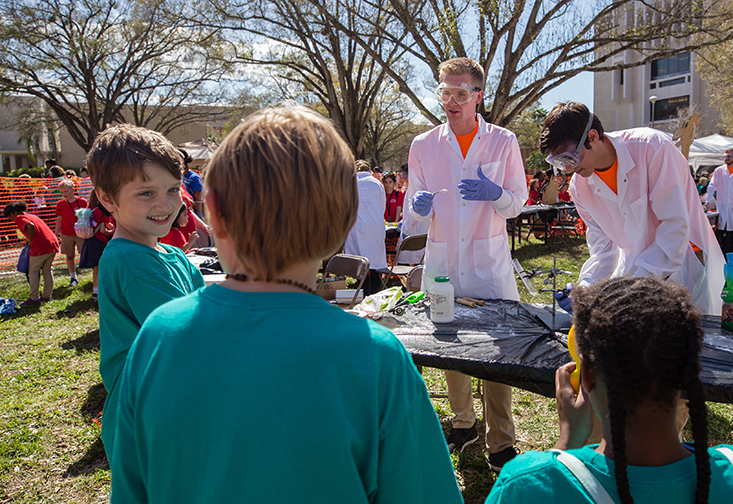 The University of South Florida’s campuses in Tampa and St. Petersburg have again earned national recognition for community engagement in teaching, research and service.

The Carnegie Foundation for the Advancement of Teaching announced that the two institutions are among 119 U.S. colleges and universities to receive the 2020 Carnegie Community Engagement Classification.

This designation is not only vital to USF’s mission as a metropolitan public research university, but it also is one of the metrics used by the Florida Board of Governors to determine Preeminence eligibility.

The designation follows a process of intensive self-study by each institution, which is then assessed by a national review committee led by the Swearer Center for Public Engagement at Brown University, the administrative and research home for the Carnegie Community Engagement Classification.

Both the Tampa and St. Petersburg campuses earned the community engagement classification in 2010. According to Wichinsky, the 2020 reaffirmation is significant because it shows the growth of the university’s efforts.

On the St. Petersburg campus, 44 percent of majors included citizen scholar-designated courses in 2010. By the 2017-18 academic year, that had grown to 81 percent.

“With community-engaged learning, students get to apply skills and theories learned in the classroom to address community challenges,” Wichinsky said. “They also are learning about diversity, working with individuals and communities they might not have previously interacted with, but will do so throughout their lives.”

She noted that USF’s efforts are helping to address a number of concerns identified in the Tampa Bay Partnership’s recently issued regional competitiveness report.

“I went to the recent ‘state of the region’ meeting and listened to the discussions about poverty, about the lack of transportation for people to get to jobs, about food insecurity and housing, among other issues,” Wichinsky said. “Our faculty and students are addressing the very issues that report identifies as holding our city back.”

To compile the applications – which took well over a year – Wichinsky, McLauchlan and their teams reached out across their campuses to every college, as well as academic and student success units, and other stakeholders. The Carnegie Foundation also required contact information for a variety of community partners to verify material in the document.

McLauchlan noted that the 2020 application required far more detail than was the case 10 years ago.

“The Carnegie Foundation made it very clear how much more rigorous the standards are this time around,” she said. “They basically said that just because you had the designation before, don’t think this will be a walk in the park. It’s striking how many universities that had the community-engaged classification in 2010 chose not to pursue reclassification. The Carnegie Foundation’s expectations were very daunting.”

Of 121 institutions nationally that could apply for the re-classification, 44 did not.

“We needed to demonstrate that we have meaningful, sustained partnerships,” McLauchlan said. “This provided a special challenge but also an opportunity for soul-searching: What makes the St. Petersburg campus special, what is our identity? Time and time again, what we found is that we’re part of the community, that we have a passion for our citizen-scholar program.”

Martin Tadlock, regional chancellor of USF’s St. Petersburg campus, noted, “We are dedicated to preparing students to become thoughtful, engaged citizens and advancing research and knowledge that serves the public interest. The Carnegie classification speaks to that core mission and is embedded in the fabric of what it means to be a part of the USF St. Petersburg community.”

While the applications are extensive – each is around 100 pages – they can’t possibly include all community partnerships.

“We were very intentional about providing balance in describing the work that our faculty, staff and students are doing,” Wichinsky said. “Every college is making a difference.”

Among the examples in the Tampa campus’ application is a partnership with Mort Elementary School in Tampa. In the 2013-14 school year, the overall grade awarded to the school by the Florida Department of Education was an “F.”

By 2018, the school’s overall grade had improved to a “C.” In addition, prior to the partnership with USF, Mort had 16 teacher vacancies across an entire school year. Today, there is a waiting list to teach at Mort.

Other examples include the USF Community Sustainability Partnership Program with the city of Dunedin on projects such as sea level rise and historic preservation, and a variety of projects with the University Area Community Development Corp. in Tampa.

On the St. Petersburg campus, the Open Partnership Education Network started hosting the multi-day “Et Cultura Festival” in 2016. It brings together national/international innovators, musicians, filmmakers and artists to collaborate and showcase their work alongside local artists and community leaders.

The campus also has partnered with Community Action Stops Abuse (CASA) since 2006. During the 2016-17 academic year, a student-led drive raised more than $29,000 from 170 students who donated unused meal plan funds to buy food to donate to the organization. CASA said it was the single largest food donation in its 40-year history.

Among many other initiatives, students work with Southeastern Guide Dogs to help raise puppies, and accounting students provide tax preparation assistance to low- and middle-income residents in Pinellas County through the IRA VITA Program.

“Across our campuses, we look forward to using the findings from the Carnegie application to enhance our impact on the region,” Wichinsky said.

WUSF News: Rhea Law ‘Can’t Say No’ To The Chance Of Serving As USF’s Interim President

Chronicle of Higher Education: Is Your Degree Program Too Complicated?

Forbes: What Entrepreneurs Can Learn From Academia - How To Engineer Your Team