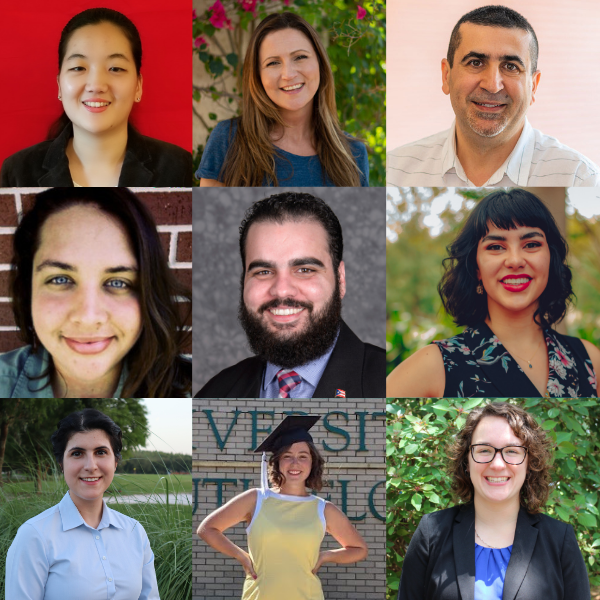 Nine University of South Florida (USF) students have big plans this year. They have been awarded grants from the Fulbright U.S. Student Program to spend the 2019-20 academic year abroad teaching English, undertaking an independent research project and pursuing graduate study.

The Fulbright U.S. Student Program is the U.S. government’s flagship international educational exchange program and aims to build lasting ties between the U.S. and other countries, awarding approximately 2,000 grants annually and operating in more than 160 countries across the globe. Fulbright awardees are selected by a 12-member board appointed by the president of the United States, and selection is based on academic and professional achievement as well as evidence of service and leadership potential in their respective fields.

Despite their varied academic backgrounds, USF Fulbright Program Advisor (FPA) and Associate Director of the Office of National Scholarships (ONS) Ms. Lauren Chambers said this year’s recipients share one thing in common: a dedication to reaching their potential as a USF Bull.

Here’s a closer look at each of this year’s USF Fulbright U.S. Student Program recipients.

Jaclyn Dell
Dell, an alumna of the master’s program in Psychology at USF St. Petersburg and a Fulbright study grant recipient to the United Kingdom, serves as a women’s mentor and addiction treatment coordinator at The Rock Transformation Center, a faith based residential recovery ministry in her hometown of St. Petersburg, Florida. As a Fulbrighter, she will earn her doctoral degree in Psychology at the University of Birmingham in the United Kingdom, and continue the research she began at USF St. Petersburg with Dr. Clayton Hickey at Birmingham, a leader in the field of reinforcement learning and motivated cognition.

Dell’s Fulbright research, inspired by her father’s struggle with addiction, will focus on mechanisms in the brain related to nicotine addiction called incentive salience. After she completes her PhD at Birmingham, Dell plans to obtain a post-doctoral position, which will assist in furthering her academic research career.

Sophia Eyerman
Eyerman, an alumna of the Applied Linguistics: English as a Second Language (ESL) master’s program at USF, has received a Fulbright award to teach English in Colombia. She has previous experience teaching English in the Dominican Republic (DR) –which helped prepared her for the Fulbright opportunity of teaching English in Rionegro, Colombia. While in the DR, she created an education program for adults and adolescents learning English as a foreign language – a program she hopes to implement during her Fulbright year.

Eyerman, a native of Columbus, Ohio, plans to pursue a career teaching English as a second language. Her desire to teach English abroad is inspired by Fulbright’s commitment to mutual exchange and understanding between cultures, allowing her the opportunity to grow and develop as an educator.

Renèe Fonseca
Fonseca, an alumna of the Bioinformatics and Computational Biology master’s program at USF and a native of Inverness, Florida, will conduct research through a Fulbright research grant to Colombia. There, she will identify biomarkers associated with breast and prostate cancers in an underrepresented Afro-Colombia population – an interest which grew out of her research in immunology, genomics, and proteomics. Fonseca has conducted research at USF, Moffitt Cancer Center and the University of Toronto.

After her Fulbright research project concludes in Colombia, Fonseca plans to move to Montrèal to begin a joint doctoral program in Human Genomics and Biomedical Genetics at McGill University in Canada and Kyoto University in Japan.

Allyson Hoffman
Hoffman, an alumna of the master’s program in Fine Arts at USF, has received a Fulbright award to teach English in Trondheim, Norway. There she will teach writing and American studies to secondary and post-secondary students at the Norwegian University of Science and Technology (NUST) and Byåsen Upper Secondary School. Hoffman taught creative writing at USF, and served as the student director of Hope College’s Writing Center. In Norway, she will lead community creative writing workshops at local libraries.

After completing her English teaching assistantship in Norway, Hoffman, a Marshall, Michigan native, will pursue a doctoral degree in Creative Writing at Western Michigan University. She also plans to continue writing and publishing fiction, non-fiction and poetry, which will be based on her teaching experiences in Norway.

Adrian Iordache
Iordache is currently a Music Education doctoral student at USF. Through a Fulbright research grant to Romania, he will study the notable talent and lack of formal music training among professional musicians in the country. He hopes to identify ways to improve teaching methods and student outcomes. A native of Bucharest, Romania, and former trombonist for the Romanian National Opera, Iordache will conduct his research at a time when the number of Romanian musicians is declining.
He plans to merge his findings with the practice of music education in the United States and other countries. After completing his Fulbright research project, he will return to USF to publish his findings, write his dissertation, and complete his doctoral degree. He plans to become a university professor.

Brittany Perry
Perry is currently a graduate student studying Medical Sciences at USF and a native of Tampa, Florida. Through a Fulbright research grant to Finland, she will expand upon collaborative efforts of the first-ever meta-study on the relationship between Finnish-inspired maternal packages (baby boxes) at the University of Tampere. Perry has performed research at USF’s Morsani College of Medicine and at the National Institutes of Health (NIH).

After her Fulbright research project concludes, Perry plans to pursue a professional career in medicine as a pediatrician. She hopes the research she conducts on her Fulbright will lead to socially-linked solutions being developed in order to reduce the rates of infant mortality in the U.S. and abroad.

Faye Ricker
Ricker is currently a Geography and Environmental Science and Policy doctoral student at USF. Through a Fulbright research grant to Kenya, she will conduct dissertation field research of gendered socio-economic impacts of geothermal energy development among Kenya’s Massai community. Her desire to conduct research in Kenya is inspired by Fulbright’s emphasis on host country engagement, allowing the opportunity for her to engage with the community and learn about cultural nuances beyond research findings. Ricker, a native of Starke, Florida, is the president of the USF Geology Graduate Student Organization, and participated in a research internship at the Energy and Environmental Research Center in Grand Forks, North Dakota.
After her time as a Fulbrighter in Kenya, she will return to USF to defend her dissertation, complete her doctoral degree, and embark on a career informing equitable energy development and global environmental conservation.

William Serrano-Garcia
Serrano-Garcia is currently an electrical engineering doctoral student at USF, originally from Valenciano Abajo, Juncos, Puerto Rico. He was awarded a Fulbright research grant to continue his dissertation research in the study of organic, conducting, and semiconducting polymers for nanoscale fiber-based electronic devices at the National University of Singapore (NUS). His work at NUS will be the latest in a series of international research collaborations he has cultivated at USF, as well as with international universities and research centers, including the University of Bologna, the Center for Nanoscience and Technology Italian Institute of Technology in Milan, and the Institute of Polymers, Composites and Biomaterials Italian National Research Council in Naples.

After completing his Fulbright research project in Singapore, Serrano-Garcia will return to USF to defend his dissertation. After he completes his doctoral degree, he plans to secure a post-doctoral appointment, and eventually a permanent research position at a national laboratory.

Angela Zhu
Zhu, an alumna of USF with bachelor’s degrees in Biomedical Sciences and Music Studies, is a recipient of a Fulbright award to teach English in Indonesia. Originally from Orlando, Florida, she was inspired to teach English abroad after a USF Service Learning in Ghana trip, where she witnessed the harmful effects of building community facilities without strategies in place for long-term financial support.

While in Indonesia, she will lead community projects to engage in Indonesia culture and learn the language. After completion of her Fulbright teaching experience, she plans to earn a graduate degree in public health and teach in the medical field.

USF students applying for the Fulbright U.S. Student Program work with the university’s Office of National Scholarships (ONS) and the Fulbright Program Advisor (FPA), Ms. Lauren Chambers, on their applications. Students spend six to nine months working on their applications, which involves a rigorous and structured process, with timelines and deadlines to meet. Current USF students and alumni interested in discussing the Program are encouraged to schedule an appointment by emailing Ms. Chambers at lschumac@honors.usf.edu.