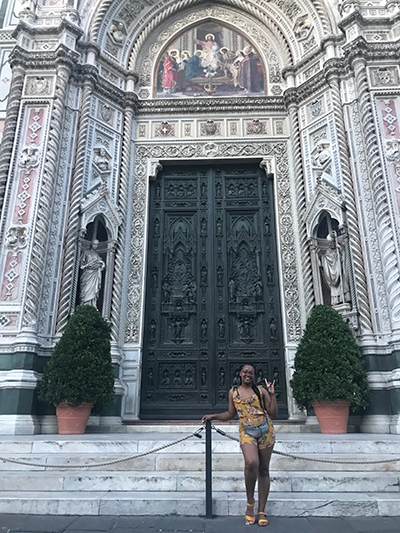 “Once I was ready to close the door, the next door opened.”

Deciding to go abroad, for me, wasn’t a hard decision. I had been looking into it for a while, so when I found a program that fit my major and the cost was manageable, I jumped at the opportunity. I had never personally traveled outside of the United States, so I had to get everything ready. I had to go through the process of getting a passport. I had no clue how to get a plane ticket because I had never even walked into an airport. So, I started on the process and got into the research pretty early.

However, a few weeks after my acceptance into the study abroad program, I received an email notice from the school essentially informing me that I hadn’t been awarded any of the scholarships I applied for through them. I had worked hard, and applied for the Gilman Scholarship, but didn’t think it would happen. Therefore, after thinking about the amount of money I had to raise, as well as the rent I’d have to pay (also not wanting to take out loans), I decided to cancel my study abroad trip because it was just entirely too much. Then came the miracle. On the absolute last day of the Gilman Scholarship notifying their recipients, I received notification that I was selected for the scholarship, and I cried and cried. Once I was officially back into the study abroad process, I completed all that I needed to complete for the scholarship as well as the study abroad requirements. I still had to raise some money, but that was due to me not wanting to accept any loans. Thus, the point of this is, the sky is not the limit. I’ve tried to study abroad before on failed attempts, and once I actually had given up and was ready to close the door, the next door opened. It might take time, tears, effort, faith, hope, dreams, and even some disappointment. However, the end goal is always worth it. It means nothing if you don’t believe in yourself and your vision.