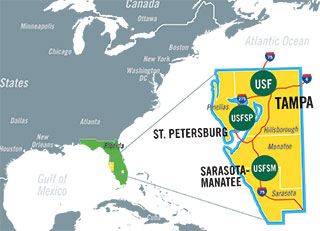 The University of South Florida System is a young and agile system that includes three institutions, each separately accredited by the Commission on Colleges of the Southern Association of Colleges and Schools: USF (located in Tampa); USF St. Petersburg; and USF Sarasota-Manatee. Serving more than 48,000 students, the USF System is ranked 43rd in the nation for research expenditures among all universities, public or private.

The USF System was formed to bring its three institutions together, so that collectively and collaboratively they could serve the region and beyond in optimal ways, resulting in a stronger presence and a distinctiveness that provides an unstoppable competitive differentiation. In addition to being a strong and unified voice for higher education, the USF System seeks to capitalize on synergies and economies of scale among its institutions.