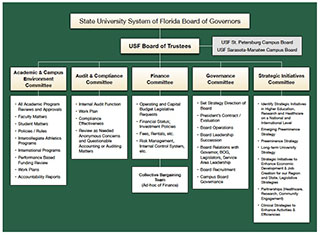 The business of the Board of Trustees is conducted through five committees: Academic & Campus Environment, Audit & Compliance, Finance, Governance, and Strategic Initiatives. Learn more about the responsibilities of each committee.

The USF Board of Trustees was created in 2001 and is responsible for cost-effective policy decisions appropriate to the system mission and the implementation and maintenance of high quality education programs within the laws and rules of the State. The legislature also mandated a Campus Board for each of the following USF System institutions: USF St. Petersburg and USF Sarasota-Manatee. The members of each Campus Board are appointed by the USF Board of Trustees.

The 13 trustees include distinguished figures in the law, commerce, education, health care, philanthropy and public policy leadership. Six trustees are appointed by Florida's governor and five trustees are appointed by the Board of Governors. The USF System Faculty Council President and USF System Student Advisory Council President also serve as trustees. The University of South Florida System President and President of the University of South Florida serves as Corporate Secretary.

The business of the Board of Trustees is conducted through five committees composed of Trustees. These committees focus on the University's attainment of institutional goals the Board adopted on December 6, 2001. Committees will review and recommend policies to enhance the USF System's effectiveness and efficiency in attaining these goals, and periodically will assess the effectiveness of the University in implementing the policies of the governing board.