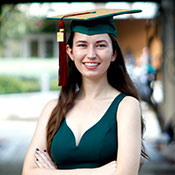 A multi-talented and apparently tireless student, Courtney holds down a variety of jobs related to her major while performing with – and helping lead – the Herd of Thunder (HOT) Marching Band and volunteering her time to causes close to her heart. Even with those extra-curricular commitments, she has a 3.82 GPA and is the recipient of scholarships and other honors recognizing her academic achievements. Concurrently, she works part-time as the social media coordinator for Phi Alpha Theta National History Honor Society and is a social media intern for three hotels in the Holiday Inn and Marriott chains. Her volunteer work includes advising students with undeclared majors, service projects with honorary band sorority Tau Beta Sigma, and using her photography and writing skills to help shelter animals find homes.

“ECM really helped guide me through the start of college. It was important to me that I had options based on my own interests that could lead me to the perfect major, and that is exactly what my track did.”   [Raegan Smith, Mass Communications]

“I feel like being declared as ECM made it easier for me to get help with the counselors to decide exactly which major was best for me. Being ECM gave me access to lots of advisors that helped me interpret personality inventories. I would have been forced to choose a major even though I was not 100% about it."   [Elena Brazee, Environmental Biology]

“I enjoyed how the ECM program allowed me to explore the art curriculum extensively before I declared. I think one of the big draws to USF for me was that they had an art/animation program. I probably would have transferred if I had not discovered it was available."  [Jack Siambanes, Studio Art]

“Coming into USF, I had already declared my major, but my advisor told me how much the ECM class of U-Decide could help me. From learning all there is to know about USF, and taking different personality tests, it really helped me understand where I belonged on campus. Having to meet with advisors other than my own allowed me to branch out and see what else USF has to offer."   [Callie Baier, Elementary Education]

"The U-Decide class has provided me with real, applicable tools that I can utilize immediately in my life. I am extremely grateful to have taken the class. I am already applying what we learned about resume writing to apply for scholarships."   [ John Keever, Marketing]