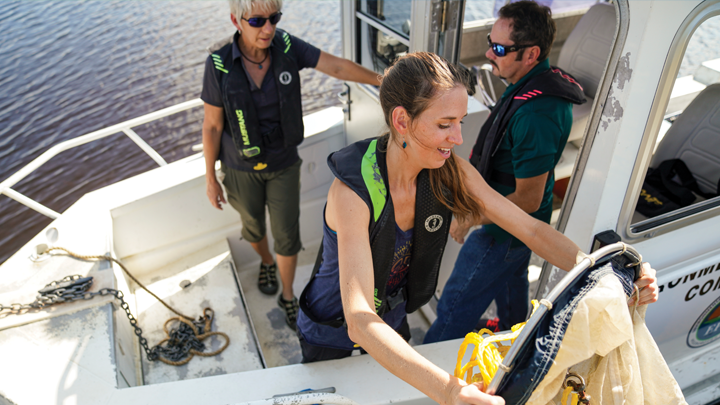 A new study from USF St. Petersburg and Eckerd College estimates the waters of Tampa Bay contain four billion particles of microplastics, raising new questions about the impact of pollution on marine life in this vital ecosystem.

This is the first measurement of microplastic abundance and distribution in the region. Researchers hope the findings will provide necessary data to inform the debate around policies to reduce plastic in the marine environment.

Microplastics are tiny plastic particles less than 1/8-inch long, barely or not at all visible to the eye. They come from the breakdown of larger plastics, such as water bottles, fishing gear and plastic bags, or from synthetic clothing and other items that contain elements of plastic. Previous studies have found these particles in every ocean on the planet, including the Arctic.

“Very little is known about how much microplastics are out there and the full consequences of these particles on marine life,” says Kinsley McEachern, the first author of the study and a recent Environmental Science and Policy graduate student at USF St. Petersburg. “But emerging research indicates a wide range of impacts on marine ecosystems from the large accumulation of microplastics.”

Since particles are similar in size to plankton, filter feeders such as oysters, clams, many fish and some birds ingest microplastics, allowing them to enter the food chain. Persistent organic pollutants, including toxic pesticides and metals, can stick to their surfaces, making ingestion potentially that much more damaging. Effects include cellular damage, reproductive disruption and death.

The study revealed that the predominant type of these tiny particles in Tampa Bay – in both water and sediment – are thread-like fibers from fishing lines, nets and washing clothes. Synthetic fibers are released from clothes while they are being laundered, discharged to wastewater treatment plants and eventually released into the bay.

The next largest source are fragments that come from the breakdown of larger plastics.

“These plastics will remain in the bay, the gulf and ocean for more than a lifetime, while we use most plastic bags and bottles for less than an hour,” says David Hastings, principal investigator of the study, courtesy professor at the USF College of Marine Science and a recently retired professor of marine science and chemistry at Eckerd College. “Although it is tempting to clean up the mess, it is not feasible to remove these particles from the water column or separate them out from sediments.

“Only by removing the sources of plastics and microplastic particles can we successfully decrease the potential risks of plastics in the marine environment,” McEachern adds.

Researchers found the largest concentrations of microplastics in water occurred after intense and long rainfall events, while in sediments the greatest amount of microplastics was located close to industrial sources.

For more than a decade, Hastings led annual research cruises in Tampa Bay with Eckerd College students to collect water samples and plankton. During these trips, he and his students were also seeing small pieces of plastic.

“We were looking at plankton, which form the base of the marine food web. But when we put the samples underneath the microscope, we were astonished to find many brightly colored pieces of microplastic. We wanted to learn more,” Hastings says.

Teaming up with McEachern, who was interested in focusing her graduate research on this issue, Henry Alegria, USF St. Petersburg associate professor of chemistry, and the Environmental Protection Commission of Hillsborough County, they set about counting microplastics in the region at 24 stations over a 14-month period. Collecting stations were located at the mouths of major rivers, near industrial facilities and in relatively pristine coastal mangroves. Particles believed to be plastic were probed with a hot dissecting needle. If the material quickly melted or disfigured, the sample was classified as a microplastic.

“This is a very important study in that it is the first for our region and shows the extent of the problem,” Alegria says. “It also provides a vital baseline on total numbers and distribution. This is important for management plans moving forward to show whether future actions and policies are effective at reducing these particles in our environment.”

Researchers say the findings, though substantial, might also be conservative, since collection in the bay occurred several feet below the water surface, likely missing any buoyant microplastics at the surface.

“We collected only a few pieces of Styrofoam, most likely because we sampled below the surface and foam floats at the surface,” explains Hastings.

Plastic pollution in the marine environment has been a concern for decades. However, only recently have scientists started to uncover the widespread abundance of microplastics in the environment. With mounting physical evidence of plastic pollution, there have been greater calls for action in coastal communities around the world. Recent bans on plastic bags and single-use plastics have been enacted by some Tampa Bay area governments to reduce marine pollution and protect Florida’s largest open-water estuary.

The findings of billions of particles of microplastics in Tampa Bay waters could bring even greater calls for action and influence future decisions in the region and beyond. Researchers at USF St. Petersburg and Eckerd College are conducting further research to more fully understand microplastic pollution in the marine environment.