This Is What We Prepare for In Public Health 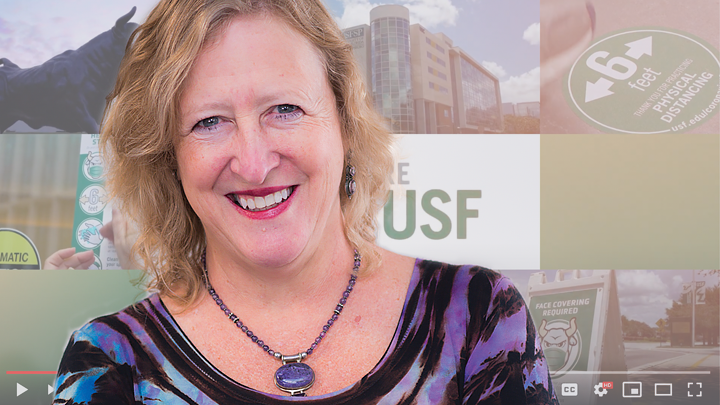 Donna Petersen, dean of the College of Public Health and chair of the COVID-19 Task Force [USFchannel]

Except for an occasional bike ride or kayaking with her husband, Donna Petersen hasn’t had much down time over the past 10 months.

Petersen, associate vice president of USF Health and dean of the College of Public Health, plays a key role in USF’s response to the coronavirus pandemic, chairing the university’s 14-member COVID-19 Task Force.

Petersen’s perspectives regarding the pandemic are informed by her 30 years in the public health field.

“I have had experience in dealing with large outbreaks in communities,” she says. “I know what happens. It’s all hands on deck. Those are intense efforts, but they end. I never anticipated anything like this.”

Many in the public health field have long believed the United States was overdue for a pandemic.

“Every time something like this emerged, SARS, the avian flu – and we were very worried what would happen if that jumped to humans – in each case, they were bad but they didn’t turn out to be the pandemic we were long overdue for. This is what we prepare for in public health. We have a decent sense of what needs to happen to control the spread of a virus like this, but that doesn’t mean it’s easy.”

The overarching challenge, Petersen says, is that there are 50 states and five territories, and under the Constitution, public health is the responsibility of the states.

“Most other countries have something like a ministry of health that manages health for the entire nation,” she says. “We’re not organized that way. That always creates challenges when you’re trying to manage something across all the states and territories.”

In early spring, the Tampa Bay region was not as severely impacted by COVID-19 as some other areas of the country, perhaps because of the way the population is distributed.

“We don’t have a dense urban core like you see in Manhattan or Los Angeles, we’re very spread out,” she says. “This is when you’re glad you don’t have a public transportation system. We don’t have a lot of the things that create exposures in large urban areas. Plus, it was spring, we were outside more. A lot of factors kept our case numbers low.”

As spring wore on, however, that changed.

“The partial reopening of businesses right around Memorial Day seems to have contributed to the increase in cases that followed, coupled with the fact that as it gets hotter outside, people are more likely to congregate inside,” Petersen says. But this is all speculative as we continue to learn about this virus and how it survives and thrives.”

For public health professionals, the continuing priority has been “trying to get the word out, to communicate, to educate.

“This is where you wish you could do a better job in peace time to prepare people for war,” Petersen says. “But, people don’t want to hear it during peace time. It’s the same as with hurricane preparations.”

Over the course of her public health career, Petersen has observed that “no one understands what public health is or does until something like this happens.

“Then, we get ‘why weren’t you better prepared?’ and the answer is that no one invests in us in peace time,” she says. “Public health budgets have been cut pretty much in every state.”

There were significant investments in public health in the wake of 9/11 and the anthrax scare that followed, allowing Petersen and her colleagues throughout the country to do more in the preparedness space.

“Eventually, that dried up,” she says. “That’s the story of our lives. We can’t be ‘the sky is falling’ all the time. To say that the sky is going to fall someday and that is why you want to keep investing in public health, that’s a hard sell.”

Petersen acknowledges that public health is competing for funds with many other needs, such as K-12 education, Medicaid and prisons.

“The approach seems to be ‘public health, nothing’s going on there, so why invest in it?’ she says. “When something like COVID happens, when you don’t have stockpiles of equipment you need, you can’t ramp up testing and you don’t have the lab capacity you need, it’s because it is hard to make the argument when there is no crisis.

“All of those things were predictable,” Petersen adds. “The investment in public health does not keep up with predictable outcomes.”

Convincing the public to wear face coverings also has been a constant challenge. In the early days of the pandemic, Petersen and some of her colleagues quietly discussed the need for people to take that step.

“But, remember when there was a suggestion that Pepcid AC was a treatment or preventative for COVID-19?” she says. “The shelves were emptied. That’s what people do. We were very concerned that if we said people should wear face masks, people would buy them all up and our health personnel and first responders wouldn’t have them. Until we could build up the supply chain, we were reluctant to say anything publicly.”

Then, when the recommendation changed, “We’re accused of changing our minds, that ‘you don’t know what you’re talking about,’ ” Petersen says.

“We’re constantly learning about this virus and we’ve tried to explain to people that we change our minds because of new knowledge,” she says. “That is an ongoing challenge in public health. Are eggs good for you to eat or not? Is red wine good for you or not? Eat this or eat that? Science is about pursuing truth. Early on we didn’t believe wearing masks was appropriate. Now we know the virus is respiratory in nature and you should wear a mask.

“You also just have that element of society that isn’t going to be told what to do. Sadly, mask-wearing is a very public thing, it’s not like wearing a seat belt in your car. The whole point is we want you to do this in public.”

Even though she knew a mask would help protect herself and others, Petersen recalls feeling awkward about it – and distracted – when she first started wearing one in the spring.

“I would wander around the grocery store for an hour, even though I had a list, trying to remember what I needed,” she says, laughing. “It kind of boggles the mind because it is such a simple thing to do.”

As with masks, there has been significant skepticism about the rapid development of a vaccine.

“There has been an incredible effort on the part of multiple companies around the world to develop a safe and effective vaccine,” Petersen says. “I believe they have been following all of the protocols. I don’t think they’re cutting corners.”

Even when vaccines are widely available, there will be many unanswered questions. Will they help create immunity to the virus? How long will immunity last? Is it like the flu, which requires a new vaccine every year? Will it be one vaccination, or two?

Regardless, Petersen is confident in the safety and efficacy of the vaccines.

“I will get vaccinated,” she says.

Since the pandemic began 10 months ago, Petersen says that effectively communicating the threat the virus poses, and ways the public could respond to it, has been difficult.

“I don’t think we fully appreciated all of the media channels people have access to and what they were reading and sharing,” she says. “We were not expressing well enough what we were learning about this in real-time.”