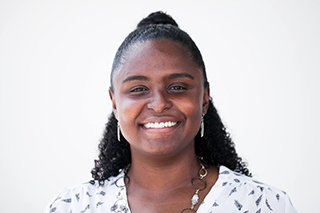 After seven years as a teacher, Hillary Van Dyke was ready to advance her career beyond the classroom and move into a school administrator role. She enrolled at USF to earn a master's degree in educational leadership and complete Florida's Level 1 Educational Leadership Certification — a required credential for school principals in K-12 schools.

While introducing students to Florida's Principal Leadership Standards, the program also gave her the opportunity to explore challenges faced by students at her school.

“In the middle school I was working at, we were doing a lot of work around trying to increase our students’ achievement levels and decrease discipline data by making things equitable by race,” Van Dyke said. “As intentional as all the work was, when I conducted an equity audit, I realized that we were still falling short in a lot of ways.”

Driven by her research findings, Van Dyke had four teachers from her school conduct an equity audit on themselves by examining their assessment and student referral data from the previous year. Through the exercise, the teachers discovered they weren’t serving certain subgroups of students in their classrooms. This led Van Dyke and each teacher to collaboratively construct research-based action plans to increase student engagement and achievement.

“When we compared benchmark assessments against the previous year’s data, all of them had improvement of some kind for Black students,” Van Dyke said. “So, that’s really what’s been guiding me ― thinking about the intentionality that a person has to bring to their work.”

During her master's program, Van Dyke's fascination with studying equity in schools grew and inspired her to pursue an unanticipated career direction — academic research and the creation of a not-for-profit organization that supports Black-owned businesses in the Tampa Bay community.

A homepage image of the Green Book of Tampa Bay site.

In 2017, when Pinellas County Schools created the “Bridging the Gap” plan, an initiative centered on reducing educational disparities between Black students and their peers, Van Dyke advanced into a position in the district’s office as senior professional development coordinator for equity.

Not long after assuming her role, Van Dyke was inspired to pursue a PhD in Curriculum and Instruction with a concentration in Social Science Education at USF, a decision she says will enable her to help aspiring educators gain a thorough understanding of racism and its historical aspects before entering the classroom.

“I had a lot of interest in pursuing my doctorate because my end goal is to be a professor,” Van Dyke said. “In this job, I’ve found that the number one thing that’s had the biggest impact on teachers is realizing how much history they don’t understand. I want to make an impact around getting teachers to be equity-minded before they start teaching.”

Van Dyke’s coursework has included a plethora of interesting learning opportunities that she attributes to the courses she took with Dr. Michael J. Berson, a professor in the Department of Curriculum, Instruction and Learning at USF.

Throughout her doctoral studies, Van Dyke has had the chance to rewrite a learning module with a classmate for third-grade students in Pinellas County Public Schools and to volunteer with Junior Achievement Tampa Bay, a nonprofit organization that educates elementary school students on real-world concepts surrounding career readiness, entrepreneurship and financial literacy. She also had the honor of contributing to the United States Holocaust Memorial Museum’s citizen historian project, History Unfolded, a crowd-source database that contains a collection of newspapers that published Holocaust-related events while it was happening.

All of these learning experiences impacted Van Dyke when launching the Green Book of Tampa Bay, a not-for-profit organization that hosts a directory of more than 500 Black businesses in the area.

Inspired by an episode from “Trigger Warning with Killer Mike,” a Netflix series which depicts the story of a man who tries to spend three days spending his money only on Black-owned establishments, products and transportation, Van Dyke says she and co-founder Joshua Bean launched Green Book to motivate every individual to invest their dollars in the Black community. The team has seen exponential growth on the organization’s social media channels since last summer, after the death of George Floyd ignited nationwide protests and increased awareness of ways to support Black communities.

“We want people to use this as a resource and to purposely step outside their comfort zones,” Van Dyke said. “Black people have always spent their money in white establishments, so (the Green Book of Tampa Bay) just gives other people the opportunity to return the favor.” 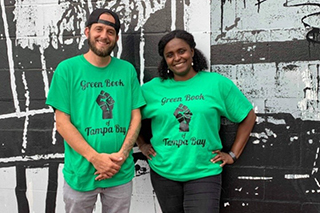 When asked about Van Dyke’s achievements, Dr. Berson said her work reflects what USF stands for ― ensuring that everyone in our community has the opportunity to succeed.

“(Van Dyke’s) co-development and launch of Green Book of Tampa Bay embodies the power of community-based engagement,” Dr. Berson said. “In the Social Science Education doctoral program, (Van Dyke) continues to challenge educational narrative and practices with the focused goal of improving the lives of all students and teachers.”

With plans to complete her PhD in 2022, Van Dyke says she aspires to continue making an impact in schools, join the professoriate community and expand her not-for-profit’s directory to include businesses across the state of Florida. Her advice to students who are on a similar path as hers is to educate themselves so that they can educate others.

“Start doing your research and don’t be afraid to have difficult conversations,” Van Dyke said. “Be open to always learning and recognizing that you’ll never arrive at being this enlightened, awakened human. I, (for example), have work to do just like everybody else.”