A Future Without Limits 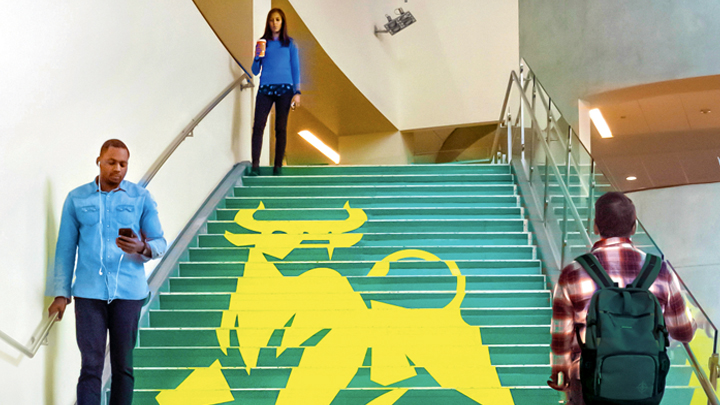 A new brand made its appearance around campus in October. [photo Ryan Noone USF News]

Who will shape the future? It won’t be the expected or the established. It will be the challengers of the traditional. Those who know innovation won’t be found at the end of a line of the same. And whether people know it or not, these future shapers are already here. They’re in green and gold. They are USF Bulls.

By so many measures – the designation as a Florida Preeminent State Research University and earning a chapter of the prestigious Phi Beta Kappa Society among them – the University of South Florida is entering a new era.

Despite the university’s well-documented progress, its reputation more broadly has not caught up. That became clear when Ipsos, a global market research and consulting firm, surveyed 1,000 people across the country to gauge awareness of USF.

Joe Hice, USF’s chief marketing officer, describes the survey outcome this way: “One percent of parents knew about USF. And they had to round up to get to 1 percent.

Among high school students planning to attend college, 14 percent had heard of USF.”
In other words, USF has a great opportunity to develop and own its identity. As USF System President Judy Genshaft said during her 2017 fall address: “We are no longer satisfied with the University of South Florida being a ‘best kept secret.’

“It’s about time our reputation is as strong as our objective performance,” she added. “Our branding and marketing efforts will be more targeted. Our messaging will be clearer. We will be more disciplined in our visual identity, including the use of our logo.”

Developing the branding and marketing initiatives has been the priority for Hice and his team in University Communications & Marketing (UCM) for the past year. In addition to the in-house creative work, the university brought Tampa creative agency SPARK – where a third of the employees are USF alums – on board in March to assist in the development of a new branding campaign.

The challenge is finding ways to tell your story and stand out in a very crowded space. There are more than 4,000 institutions of higher education in the United States, along with an array of for-profit and online schools, all of which are vying for recognition, students and world-class faculty.

“When it comes to communications in higher education, you see a lot of sameness,” SPARK Partner Dulani Porter, ’02, says. “Very few tell their story in a unique way. Many universities tout their rankings. But they don’t contextualize them so people understand it’s not just about the number of patents you have, but what those innovations mean to the world around you. Our approach is to create a platform that is just as unique as the things happening on the USF campus. No one changed the world by making it their goal to blend in.”

Among the priorities for USF and SPARK was solving the hodge-podge of logos, which Genshaft also referred to in her 2017 fall address: “Today there are countless variations of the USF logo being used across all of our campuses and all of our units – more than we can even count. While I know these were created with good intentions, this doesn’t send the message that we are united and speaking with one voice.”
Blending creative work produced by UCM with their own, SPARK presented a dozen options for a branding initiative – including a new academic logo – which were narrowed down to three. In late July, Hice started what he calls his “road show,” gathering input from stakeholders on the possibilities.

“I did 14 presentations, meeting with deans, campus leadership, the leadership at USF St. Petersburg and USF Sarasota-Manatee, members of the Board of Trustees, athletics, the USF Alumni Association,” Hice says. “In a big organization like this, it’s important to make sure you’re inclusive with your outreach. In this case, that amounted to about 1,200 people.”

His discussions included alumni on campus, in the Tampa Bay region, throughout the state and even at home. Joe’s wife, Sandy, attended USF on a fine arts scholarship and studied at Graphicstudio, earning a Bachelor of Fine Arts degree.

Hice also conducted three focus groups, one with college-bound high school students, one with admitted USF freshmen, and one with faculty and staff.

“One hundred percent of the students preferred the new bull design logo that we introduced this fall,” Hice says. “It resonated with them. One student told us, ‘While I was going through the college selection process, all of the literature became a sea of initials. This bull stops me. It makes me want to know more about the university that presents itself like this.’ We heard the same thing from students all around Florida.”

Another participant in the USF student focus group said the new logo “gives a modern and futuristic look that accurately represents USF.”

“The bull is unique and will allow us to have consistent brand messaging throughout USF,” he says. “For our researchers presenting their research at conferences, thousands of people who see our bull logo will notice that this great research comes from USF.”

And that’s the key to the bold new logo – drawing people in to learn about USF’s compelling story.

As Thom VanderKlipp, assistant vice president for marketing at USF, points out, “The logo is the outward-facing visual identity. But it’s only the tip of the iceberg as to what constitutes the brand.”

Genshaft introduced USF’s new brand during her fall address in September. The striking new academic logo, which represents “the proud and optimistic personality of USF,” complements the brand story.

“Like any great organization, we now have a clear, consistent brand to guide us as we continue to evolve in the future,” Genshaft said. “The proud new full-size Bull logo is intended to represent all of our academic units and departments, while the traditional ‘Bull U’ logo will remain for USF Athletics.”

The new logo brings together elements of bull statues on all three campuses. As Hice describes it, the optimistic, upward-angled head represents the bull at USF St. Petersburg; the stance reflects one of the bulls in the fountain outside of USF Tampa’s Marshall Student Center; and USF Sarasota-Manatee is represented by the curved tail. The starburst on the new bull represents all three campuses and the USF seal. 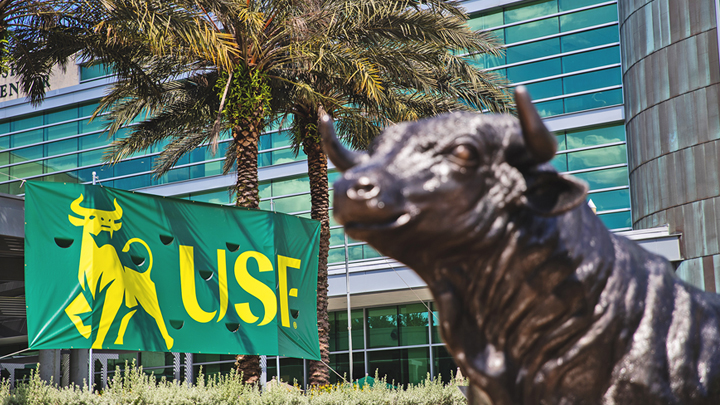 The new logo brings together elements of bull statues on all three campuses. [photo courtesy of Spark]

“When you look at academic logos, they tend to fall into two buckets – either a series of initials or a drawing of architecture,” SPARK Partner Elliott Bedinghaus notes. “With USF’s three campuses, there really isn’t that one iconic piece of architecture. But you do find prominent bull statues at all three, which represent optimism for the future.”

“We found a 15 percent increase in moving people from ‘would not consider’ to ‘would consider’ USF,” Porter says. “That doesn’t seem like a lot on the surface. But it becomes significant when we think about USF’s goal of connecting with quality students, staff and researchers. Gaining even one more rock-star researcher by having them consider us versus another university could have an incredible impact on USF’s outcomes well into the future.”

Hice knows that the foundation of a successful branding initiative is market research. It was essential to his marketing work with Bombardier, Harley-Davidson, and, from 2005 to 2011, at the University of Florida. There, he helped create the “Gator Nation” campaign.

“People are savvy,” he says. “We have to communicate clearly to the right audiences using the right channels, and we have to be true to what and who we are.”

The effort to grow awareness in Florida and nationally of USF’s accomplishments and contributions will ramp up over the next few months across a variety of platforms.

Other USF alums who played a key role at SPARK in developing the new brand were Emily Seitz, ’15, the senior copywriter who wrote the brand story; David Gonzalez, ’14, senior designer responsible for the new logo; and Rachel Canning, ’14, brand manager, who has been responsible for overseeing the project and brand launch efforts. 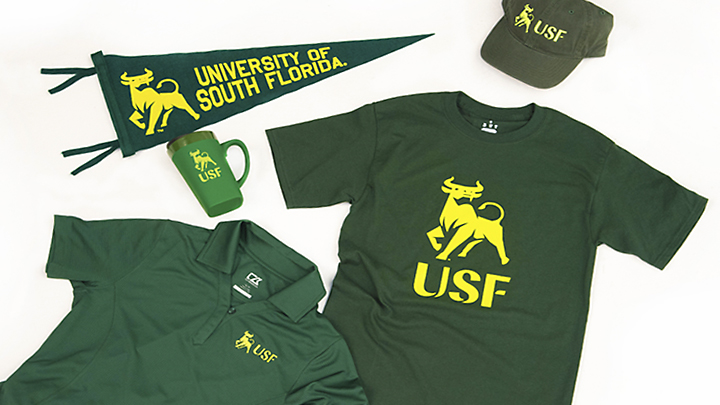 Merchandise with the new academic logo will be available in USF’s bookstores in 2019, in addition to USF’s traditional athletics logo gear. [photo Ryan Noone USF News]

Our New Story: With incredible velocity, we advance communities and pioneer new higher education standards. We embrace the unknown, conquer it, and then do it again. We define ourselves not by a name, date, or city, but by the impact we have on the world. We share one goal. We transform lives. United, we shape the future.