A look back as your Alumni Association marks its golden anniversary

We were underdogs from the get-go.

When USF appeared on the scene in 1956, our siblings already had decades on us – two had more than 100 years of legacy-inspired loyalty and entrenched football programs to fan that devotion. USF, meanwhile, threw open the doors of higher education to first-generation college students and older adults with jobs and families, most of them commuters more likely to view their university experience as a means to an end. And our founding president firmly opposed the distraction of intercollegiate sports.

But Bulls have been uncommonly dedicated advocates of their alma mater. Our earliest graduates knew that great universities grow from a foundation of proud, connected alumni, so they organized beach picnics and barbecues. Then and now, they reached into their wallets to create opportunities for current and future students. They locked arms in defiance against those who would harm their fledgling university.

On Nov. 4, we celebrate 50 years of alumni support via the USF Alumni Association. The results have been nothing short of astounding. USF today is a Preeminent Florida Research University ranking among the top public universities in the nation for student success, research and value. It has an annual economic impact of $4.4 billion, and its graduates include some of the most accomplished professionals in their fields, from education and engineering to architecture and the arts. With 350,000 alumni, we have well-established chapters and societies across the country and around the world.

“Our alumni became fiercely loyal and that’s absolutely critical; if alumni don’t care about their school, no one else will either,” says Joe Tomaino, ’71, Life Member, the Alumni Association’s first executive director, and 1979 Distinguished Alumnus.

“Donors and politicians are always looking at university alumni and asking, ‘Do they really care? What are they doing that shows they care?’ You need a strong alumni association to build that affinity and engage alumni in ways that make it clear they love their university.”

The USF Alumni Association incorporated on Nov. 4, 1969, but its work began years earlier – before the first graduate ever received a diploma.

One evening in February 1963, months before the first Commencement, seven students who’d completed their studies met to consider their roles as alumni. The group reflected USF’s non-traditional appeal: Six of the seven were married women, including the late Lucas King, 57 at the time, and the late Evelyn O’Neal, 45. Both teachers and USF’s first and second graduates, the two are remembered each year with the alumni association’s King-O’Neal Scholar Award, first presented in 1965 to the graduate with the highest grade-point average. Today, all graduates with a 4.0 GPA receive the honor.

Those early planners deferred most decisions until after Commencement in December, but set $5 (about $42 today) as the minimum donation for membership in the future association. They agreed to ask the USF Foundation, which would oversee the association, to enroll the university in the American Alumni Council, and to plan a fall cruise for all graduates – an “alumni planning outing.” 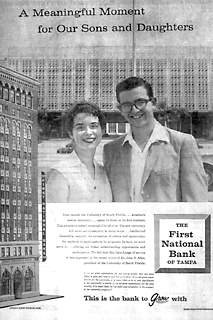 “I was tapped by John Allen to corral alumni,” recalls committee member Julian Piper, ’63, Life Member. He was 21 at the time, president of USF’s Young Democrats and Jewish Student Union, and would become the first president of the association’s board of directors.

The first in his family to attend college, Piper found in USF a way to afford the cost of tuition. He could save money living with his parents while bagging groceries 24 hours a week. Eager to get on with life, he plowed through his degree in three years while also participating in clubs. But when Allen asked him to help create an alumni association, he didn’t hesitate.

“I was very proud and pleased to do whatever and pave the way for everyone who came afterward,” says Piper, who went on to become a successful Tampa Bay lawyer.

On Dec. 21, 1963, on the eve of USF’s first Commencement, the steering committee and 128 “active members” – those who’d paid $5 – affirmed the association’s by-laws at a celebratory banquet.

By 1966, volunteers had launched a bi-monthly newsletter, The Golden Horn. They held receptions for new graduates, hosted holiday dinner-dances and “alumni weekends” featuring faculty lectures, and started organizing alumni chapters. Help came from a Foundation employee, the late June Miller, who pitched in by serving as the hub for communications. Her meticulous recordkeeping included writing each member’s information on a 3-by-5 card, which she stored in a shoebox.

In 1969, with total alumni approaching 10,000, the association incorporated as a nonprofit, becoming a legal entity. It got its first executive director, a gregarious and tireless fundraiser who believed whole-heartedly in what USF could become with support from its graduates.

“What makes us different is those charter years,” Tomaino says. “Everybody struggled – the students, the staff, the faculty, everybody. We didn’t have a lot of money from the state. Our students were relatively poor. But USF became a little community and the alumni, they realize what a great opportunity they had at this university.”

Over the course of 50 years, the alumni association would move from borrowed office spaces at various locations around campus to its own state-of-the-art, free-standing building. It would grow from a single employee, Tomaino, to 20, and from no organizations for students to three, including the popular and prestigious USF Ambassadors and the largest on campus, the Student Alumni Association.

Along the way, the association would distribute nearly $6 million in scholarships while lobbying the state for everything from a football team to a new downtown medical school.

“We’re in the business of changing lives and saving lives,” says Lee Patouillet, ’75, Life Member, the association’s second executive director. “In alumni relations you have a phenomenal impact on the future of the university, from the young people you coach and encourage who go on to do great things to the first-generation students who transform their lives – and their whole future family tree – through education.

“And you can’t do any of it without engaged, connected alumni who are willing to invest their time, talent and treasure.”