Whether she’s cheering on the Bulls at a sporting event, celebrating USF at Homecoming festivities, or simply stopping for a bite to eat on campus, President Judy Genshaft relishes engaging with students and alumni on a personal level. Those exchanges – often warm, sometimes funny, always genuine – become cherished lifelong memories for many a Bull.

Such encounters have also led to a new USF tradition: selfies with the president.

President Genshaft’s inauguration in 2000 predated the soaring popularity of smartphones, and as cell phone cameras proliferated, Bulls increasingly asked her to “take a selfie with me?” Her willingness to lean in for a snap made photos with the president, selfies or not, must-have keepsakes. 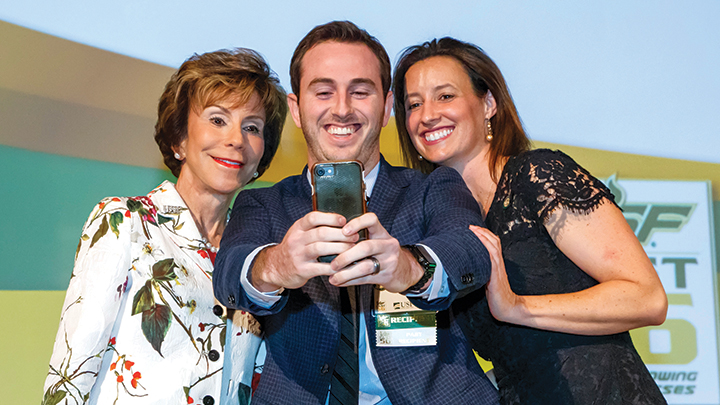 MY THIRD YEAR AT THE USF FAST 56 ceremony I really wanted to do something different to capture the excitement of the event. President Genshaft always brings the level of fun up when she’s on stage, so when I was called up on stage as one of the top 25 businesses, it was an opportunity I could not pass up.

This photo has special meaning for me because the president has represented everything USF for as long as I have been involved with the school.

PRESIDENT GENSHAFT WAS ALWAYS AN inspiration to the USF Sarasota-Manatee Ambassadors. She was the perfect example of USF pride, grace, and lifelong commitment to education. My fellow Ambassadors and I were always grateful to President Genshaft for having dinner with us once a year at Lifsey House, and to the USF Alumni Association for supporting our program. 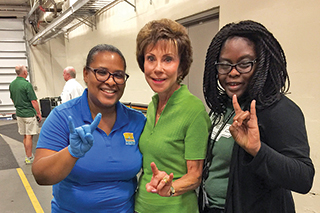 Ayesha Johnson, PhD ’16, left, and fellow volunteer Sterlyne Juste, ’16 and ’18, with the president at the special-needs hurricane shelter in the former USF Sun Dome.

One of my favorite moments with President Genshaft was after Hurricane Irma. I was working at the special-needs shelter at the USF Sun Dome [now the Yuengling Center]. I felt very proud to be a USF alum because of the care given by the Sun Dome staff. And then, to top it off, President Genshaft visited to provide comfort at a difficult time for Florida residents.

WHEN MY WIFE AND I WERE ATTENDING A reception in the Marshall Student Center in the Top of the Palms Restaurant, President Genshaft noticed that we had just arrived. She came over, chatted for a moment, then asked if we would like a glass of wine. We said “yes,” and she brought us each one in just a few minutes! That is so typical of her belief in the personal touch that connects people to each other and to USF.

Having been at the university for 48 years, I have seen presidents and administrators come and go. But I have never seen anyone with the dedication and abundant energy poured into USF as Dr. Judy Genshaft has shown.

Recently, I told her that there would be many puddles of tears when she left. She turned and said, “And some of those puddles will be mine.” 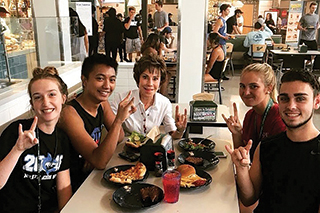 Then-students, clockwise from left, Haley Johnson, ’17, Brielle Manuel, ’18, Claire Strickland and Jordan Lohmeyer, with the president at The Hub.

I WAS A RESIDENT ASSISTANT AT Cypress Hall in fall 2017 when The Hub opened on campus. It was very busy and packed, and we noticed President Genshaft sitting a few tables away from us. It was my fourth year and I had not yet taken a picture with her. Mustering my courage, I asked her to take a picture with me and my residents, and she agreed! After that, I was the coolest RA on campus.

DURING MY STUDENT GOVERNMENT PRESIDENCY in 2010-11 and thereafter, President Genshaft and her husband treated my sister, Adriana Diaz, ’14, and my parents (all Life Members) like family. We exchanged holiday cards and always remembered to bring the president a Bull souvenir when we traveled.
President Genshaft, you will always be a part of the Diaz family! 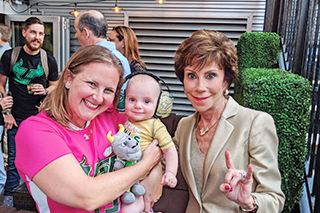 MY HUSBAND, ANDREW, ’11, LIFE MEMBER, and I met on campus at USF back in 2007. We are very involved in alumni activities and love showing our school spirit. Last year when we saw there was a football game in Chicago, we were thrilled to drive over from our home at the time in New York City and bring our 8-month-old to his first football game. Having Charlie meet Dr Genshaft, someone so important to our family, was amazing. She has made such an impact in our lives, and we will greatly miss her. 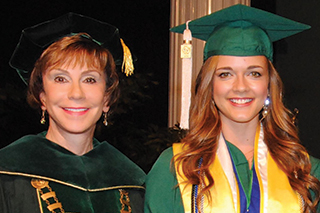 I STARTED IN THE FIRST FRESHMAN CLASS AT USF Sarasota-Manatee and, as a student Ambassador, I had the great honor of attending an annual dinner with the president. She was so kind, friendly, and passionate about students; we all treasured the moments we got to chat with her.

I set the goals of becoming a King O’Neal Scholar by achieving a 4.0 grade-point average and being a 2016 Outstanding Graduate. I visualized myself getting my picture taken on graduation day with President Genshaft and the medals. Sure enough, it happened! 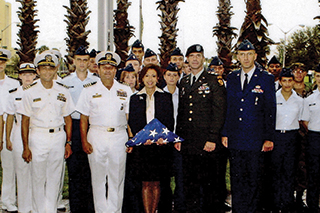 PRESIDENT GENSHAFT ATTENDS THE FIRST TRULY JOINT ROTC event at USF. Students in the Army, Naval and Air Force ROTC gather for a ceremonial flag lowering in observance of the Sept. 11, 2001 terrorist attacks. 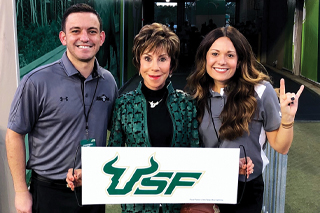 Matthew Manuri, '09 and Stephanie Manuri, '09, Life Members, with the president at Raymond James Stadium in 2017.

MATTHEW MANURI, ’09, AND STEPHANIE MANURI, ’09, Life Members, with the president at Raymond James Stadium in 2017. “As we were walking through the tunnel, I noticed her with the banner,” Matthew writes. “I decided to introduce us both to President Genshaft and asked if she would mind taking a quick pic.”

“We have all been so blessed to have benefitted from Dr. Judy Genshaft’s outstanding dedication to the university. She truly embodies the spirit of USF and has left a legacy that will always be admired.”