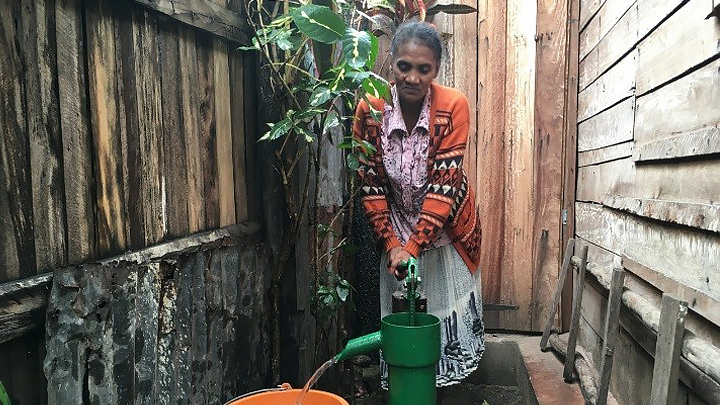 The project did a preliminary pump adaption at this woman’s house. Here, she is using the pump after adaption. [Photo: Luke Barrett]

USF COLLEGE OF ENGINEERING Professor James Mihelcic was visiting Tamatave on the east coast of Madagascar to see the work some of his former graduate students were doing on water sanitation and hygiene. That’s where he stumbled upon local artisans building hand pumps used to access shallow groundwater.

“Right in front of us, one of these artisans melted down old lead car batteries over a charcoal fire,” he says. “He poured some molten lead into a small depression in the ground he’d made from a soda pop top. Then, bingo. He had a piece for the two check valves you find in a suction pump.”

Just watching the demonstration was enough to tell Mihelcic and his colleagues that lead in the drinking water probably exceeded the World Health Organization’s (WHO) recommended amounts, but they tested samples anyway. Some of them came back at 100 micrograms per liter, 10 times what the WHO says is acceptable.

Lead in drinking water is neither a new problem nor one unique to developing countries like Madagascar. Consider the public health crises surrounding drinking water in places such as Flint, Mich., Newark, N.J., and Jackson, Miss. Lead is a toxic chemical pervasive in the environment. How long and how significant one’s exposure determine the severity of the health problems it causes, but overall lead exposure can damage the brain, kidneys and nervous system and slow physical and intellectual development in children.

With the help of funding from a variety of sources, including Water Charities, Pure Earth, a USF Strategic Investment Pool award and his own personal savings, Mihelcic and his team developed a training program for local manufacturers of hand pumps that would teach them how to replace lead components with locally manufactured iron ones.

The team consists of Assistant Professor Mahmooda Khaliq Pasha, PhD ’16, from USF’s College of Public Health, Professor Jeffrey Cunningham and Assistant Professor Katherine Alfredo from the College of Engineering, and some dedicated graduate students. They’re partnering with Ranontsika, a Malagasy non-governmental organization whose aim is to improve public health by promoting access to high-quality drinking water. Local health clinics are also involved in testing the blood levels of children in the community and educating their parents about the health problems associated with lead exposure.

“After our intervention of retrofitting hand pumps with iron valve components, lead water concentrations were reduced below the WHO drinking water guideline of 10 micrograms per liter in 98 percent of pumps,” says Mihelcic, who also directs USF’s Engineering for International Development program. “The percent of pump systems that had lead concentrations reduced below our analytical detection level increased from 9.6 percent to 64 percent. It’s quite a striking improvement for a very simple fix.”

Changing out the lead components to iron ones costs about $4 per pump, Mihelcic says — a worthy expense when you factor in what lead poisoning can cost a community.

“When you consider how a country’s economy suffers because of the loss of IQ of its children, the return on the investment is extremely high,” Mihelcic says. “Prior to the intervention, we estimated that 35 percent of exposed children had a blood lead level greater than the CDC action level [5 micrograms per deciliter or less] and after the intervention we estimated only 14 percent of exposed children possessed elevated blood lead levels.” 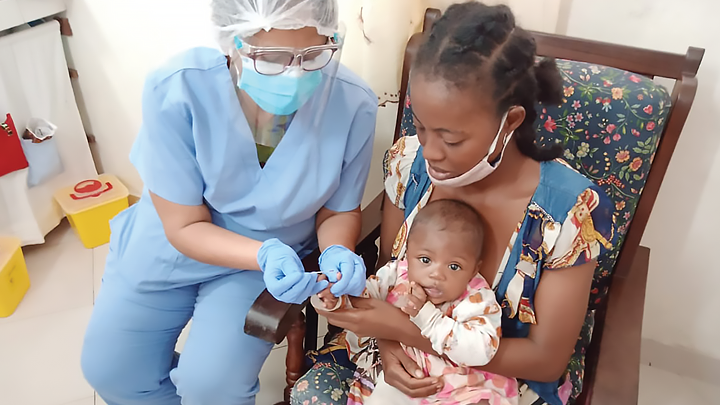 Turns out engineering a non-leaded valve replacement was the easy part. Getting the local technicians to use it — and the community to demand it — proved harder.

That’s where Pasha’s expertise came in.

Pasha is an expert in social marketing, which is behavior change — founded on commercial marketing principles — that brings about social good. She’d been collaborating with Mihelcic and some current and former students on the project on an informal basis but got more involved when she applied for an internal College of Public Health grant inviting collaboration across strategic areas.

“As you can imagine, in a community with not a high level of understanding of lead and its health consequences, sudden change in the norm can create a sense of unease,” Pasha explains. “That’s especially true if it’s initiated by folks who aren’t necessarily representatives of your community.”

Pasha and her team decided to target their social marketing campaign to the technicians locals used to fix and maintain their water pumps.

They spoke to the technicians and translated their findings into a strategy and branded initiative, holding informational and technical sessions and providing in-the-field assistance. After their training, the technicians received certificates signed by the Ministry of Health and Water along with T-shirts and overalls with the project’s branding -- all important signals to the community that the project was professional and the technicians trustworthy, Pasha says.

With technicians on board, Pasha and her team are now turning their attention to the community.

“We found that sometimes the technicians didn’t want to use lead, however, a customer would insist on it because of the look of the metal or the perception that it’s heavier and better for the pump,” Pasha says. “We have intervened midstream through our work with the technicians, and now we’ll focus our work downstream so that there’s a common understanding among the community. Our project is a model for translational science. Any work that the engineers do in the future is complemented by the expertise of behavioral scientists who work to better position the product, service or behavior.”