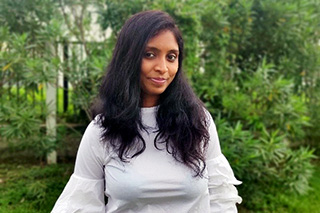 After earning two degrees and pursuing a career in early childhood education within her home country of India, Deeksha Aradhya wanted to continue her studies to view the field through a research lens. As a doctoral student in USF’s College of Education, she’s gaining hands-on experience in research and supervision while also creating opportunities for herself that will prepare her to make meaningful change within the profession.

Deeksha Aradhya knew she wanted to revolutionize the way young children learn since entering her first early childhood course during her undergraduate studies in India.

It was in her last semester as a home science major in Mount Carmel College when Aradhya was introduced to the many factors that contribute to a child’s development. From that moment on, she became captivated with the field.

“(The course) had a deep impact on me,” Aradhya said. “It helped me realize many truths of my own life and allowed me to heal from some traumatic childhood experiences. Through it all, there was a growing need for me to learn more.”

After earning her master’s degree with a first rank and gold medal in Early Childhood Education and Administration from Smt. VHD Central Institute of Home Science in Bangalore University, Aradhya took on roles as a pre-K educator, a teacher trainer and a program coordinator―all with the aim of advancing the early childhood system in her native country.

While she considered herself skilled in the areas of teaching, there was a level of expertise that Aradhya was eager to reach. Upon interaction with education leaders from Save The Children USA—a nonprofit, humanitarian organization that seeks to help disadvantaged children in India, the United States and around the world—Aradhya felt inspired to step outside her comfort zone by pursuing her doctoral studies overseas. In 2018, she made the decision to enroll in the University of South Florida’s (USF) Curriculum and Instruction Ph.D. program with a concentration in Early Childhood Education.

“When I connected with the early childhood department at USF and saw the research all the professors do, I was really fascinated,” Aradhya said. “Until then, I was concentrated on teacher training as an educator, but with a researcher’s lens, I could look at what actually happens to children and how it happens.”

Continuing her educational journey in a country far from home was no easy feat for Aradhya, yet it began with her taking initiative at the start of her first semester at USF. 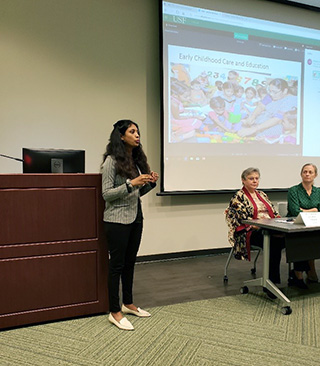 In SCATTER’s “Education Around the World” event, Aradhya participated as a panelist and represented India by conducting a presentation on the country’s early childhood education system.

Driven to learn about the early childhood system in the U.S., Aradhya joined her professors as an observer during their supervision visits at local schools. She later participated as a panelist in the SCATTER Program’s “Education Around the World” event and actively volunteered in the USF Early Childhood Summit, an event that gathered USF faculty members from various fields to foster interdisciplinary research.

In 2019, Aradhya started working as a graduate assistant, a position that provided her with the opportunity to teach undergraduate students in her major and develop her own research interests. With the support of mentors like Sophia Han, PhD, an associate professor in USF’s Early Childhood undergraduate program, she began to explore gender rules and identities by focusing on children’s literature in early childhood classrooms. Her work led to a presentation that same year in the Florida Association for the Education of Young Children’s (FLAEYC) annual conference at Orlando.

“The typical books that are read in classrooms show traditional gender norms, like how a girl awaits her prince charming,” Aradhya said. “I discussed non-traditional books that you could introduce to children such as ‘The Paper Bag Princess’ and ‘Princess Boy’ to break gender stereotypes.”

As she balances her studies and her role as a graduate assistant in the College of Education, Aradhya has made efforts to not only better herself as an international instructor, but also to prepare the future educators she teaches each semester. This fall, she plans to launch a self-study that will include training 17 Level 3 teaching interns on how they can teach reflectively in multi-cultural classrooms.

“With everything going around in the world, there’s a need to understand that everybody comes from different cultures, even within their own set of communities,” Aradhya said. “It’s important, especially for pre-service teachers, to understand why a child is doing something. It’s not always because (a child’s) an introvert, it could maybe be a part of their culture that’s causing them to behave a certain way.”

Aradhya expects to complete her doctoral studies at USF in 2022, and before that she plans to conduct a pilot study on gender rules in USF’s Preschool for Creative Learning and publish her research articles with professional organizations, such as the National Association for the Education of Young Children (NAEYC).

After earning her PhD, Aradhya hopes to work with a nonprofit organization like Save The Children USA, so she can continue her work in bridging academic gaps for children in unfavorable situations. Her advice to students with similar interests as hers is to make the most out of their academic experience and to push for what they desire.

“Initially when I came here, I had the urge and passion to learn more and I ventured into this journey knocking on doors and reaching out to professors.” Aradhya said. “So, I believe in not waiting for opportunities—but rather, creating your own opportunities.”

The mission of USF's Early Childhood Education program is to develop knowledgeable, responsive, and innovative professionals who are committed to creating dynamic and stimulating early learning environments with an emphasis on inquiry, creativity, and reflectivity.