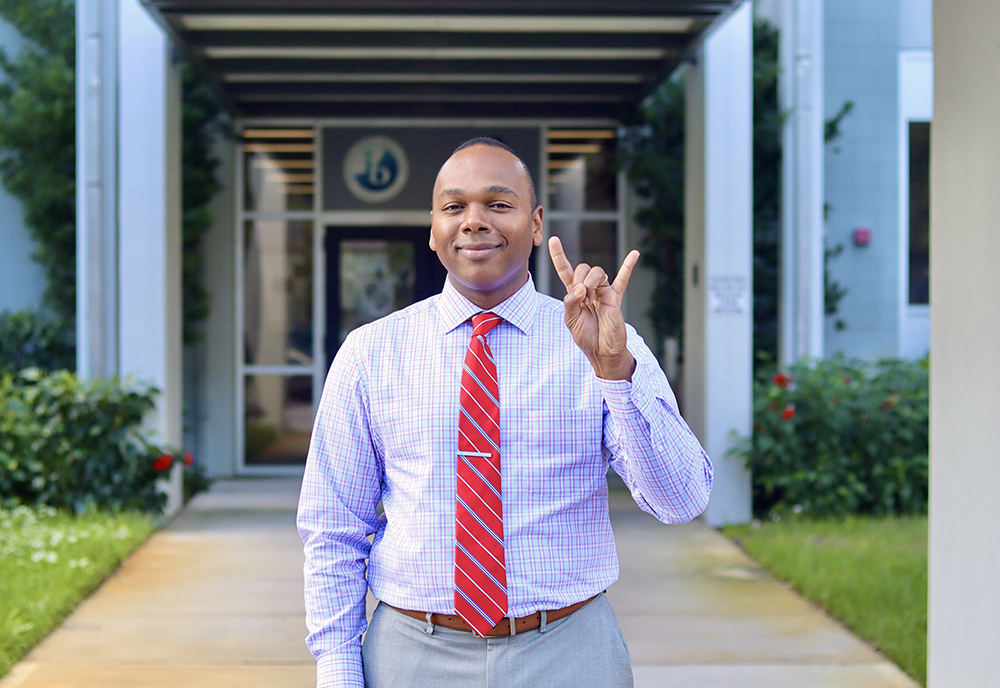 Robert Bhoolai had no plans of becoming an educator, much less becoming a principal.

One day, as he sought to comfort his wife, who was a first-year teacher at the time, she explained the challenges of being an educator. She said he won’t understand the realities of her profession unless he experienced it for himself.

Committed to taking on the task, Bhoolai signed on to be a part-time substitute teacher. While he aimed to only get a gist of the teaching field, the day he subbed for an eighth grade English class determined much more for him.

“From the first moment I stepped foot in the classroom, I knew (teaching) is what I wanted to do,” Bhoolai said. “It was the best decision I’ve ever made.”

Through the bachelor’s degree he earned in sociology from Wittenberg University, Bhoolai began to teach science, civics and U.S. history classes to students at Turkey Creek Middle School and Mann Middle School. Working with a new sense of purpose, Bhoolai went on to teach for the next four years—until a mentor of his encouraged him to advance his career through a path in leadership.

“My former principal, Nancy Trathowen, provided me with opportunities that opened my eyes to my ability to grow myself as a leader,” Bhoolai said. “I was able to understand the importance of having a skill set and using it for the good of others.”

In 2009, Bhoolai enrolled at the University of South Florida (USF) to pursue a master’s degree in Educational Leadership. Not only was USF recommended to him by several of his colleagues, but the program’s focus on driving student learning and achievement stood out to him.

“At the time, it provided an in-person learning experience that I could not get with other universities offering an M.Ed,” Bhoolai said.

After attaining his degree, Bhoolai went on to work as an assistant principal of student affairs for Spoto High School in 2011 and later worked at Williams Middle Magnet School in 2014. In 2016, he became the principal for Robinson High School—a small high school in Hillsborough County known for its multiple programs, such as its distinguished International Baccalaureate (IB) program.

Robinson is the destination high school for military children of families who are stationed at the nearby MacDill Air Force Base—an unique attribute that led Bhoolai to garner confidence in his role as principal at the school.

“As a military child myself, I understand the importance of having a network of peers in your receiving school to help orient yourself, because it could be stressful,” Bhoolai said. “So, that aspect of working with the military really drew me to the school.”

Upon accepting the position as principal, Bhoolai began to analyze the various factors that make high-performing students at Robinson succeed. In doing this, he’s been able to implement support systems for struggling students and internalize those systems as part of their daily practice—techniques that he developed through his studies at USF.

Throughout his four years at Robinson, Bhoolai has accomplished the goals he set out from the beginning.

“I’m extremely proud of Robinson in the last few years,” Bhoolai said. “One of my goals when I came to Robinson is to make this school an ‘A’ school. We were able to achieve that ‘A’ last year and we were able to close some of those achievement gaps.” 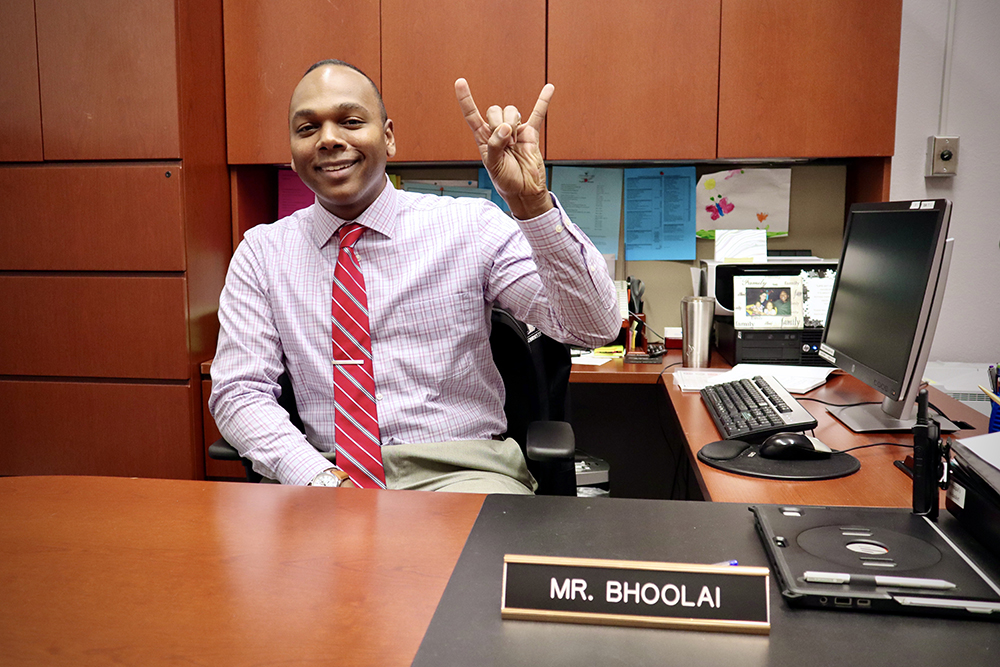 Bhoolai in his office at Robinson High School.

Along with contributing to the academic success of students, Bhoolai says he has also worked towards creating a supportive environment for all individuals at Robinson, particularly when changes in legislation or state requirements take place.

“As the principal, you sometimes have to be the filter through which things flow,” Bhoolai said. “So, when you know there’s going to be a change that’s going to affect your campus, you have to determine: What do I need to filter so that no unjust stress or anxiety is put onto teachers, staff or students? This has been one of my largest experiences.”

As Bhoolai carries out his administrative duties at Robinson, he’s also been set on continuing his academic journey at USF.

In the spring of 2019, Bhoolai decided to pursue his Ed.S in Turnaround School Leadership, a program that prepares educators to become effective school leaders skilled in addressing the challenges that face many underperforming schools. Between the multiple class discussions and the collaborative work he’s done, Bhoolai has been able to understand the perspectives of various individuals in the field.

“One of the best things about the Ed.S program that I’m currently in is that it’s a cohort program, so there are many other principals, assistant principals, district level employees (and) curriculum specialists that I can learn from,” Bhoolai said. “It’s helped me form a network with my colleagues. Now, I understand the challenges they’re facing in their schools and I know I’m not alone.”

As an educator who took a non-traditional route to get his teaching certification, Bhoolai admits there’s a “large chunk of information” he missed out on. However, his time in the Ed.S program at USF has given him the opportunity to advance by studying topics that are essential to the field.

“The text in this program has allowed me to gain a broader view of the educational landscape over a long period of time so I can understand where we are today, how we got to where we are today and what we can do to move forward.” Bhoolai said. “It was a huge eye-opener.”

In addition to the relationships he formed with students in the program, Bhoolai can also name various faculty who have served as mentors throughout his studies.

When reminiscing on the distinct teaching styles he’s observed, he thinks of Dr. Vonzell Agosto, Dr. John Mann and Dr. Arthur Shapiro. Moreover, Bhoolai credits Dr. Joyce Haines for boosting his confidence and Dr. William Black for being the reason he will soon pursue his doctoral studies.

As he thought over the classroom experiences he’s had, Bhoolai mentioned Dr. Zorka Karanxha, an associate professor at USF who he considers to be a “social justice warrior.” When introducing a discussion on cultural proficiency, Bhoolai said that Dr. Karanxha provided a safe space for administrators of multiple races to explore the topic in depth.

“She helped us understand what we could do to help make (cultural proficiency) more efficient in our schools, as well as understand what we’re not doing that could be leading to cultural deficiency,” Bhoolai said. “Somehow, it was all framed in a positive experience because of how she led the course.”

Bhoolai plans to finish his Ed.S in Turnaround School Leadership in the summer of 2020. From the moment he began his studies, Bhoolai said his time at USF has developed him to be a well-rounded leader.

“There’s a lot of administrators that are good at one or two things, but they have blind spots,” Bhoolai said. “I’m not saying I don’t, however, I think I’ve been able to capitalize on my strengths and minimize those blind spots because of what I’ve learned at USF.”