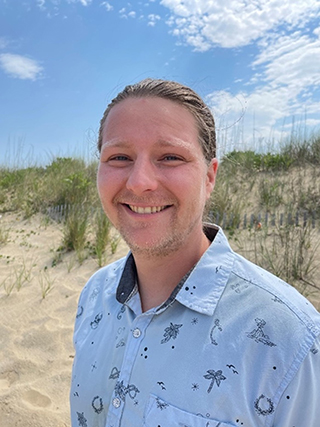 College of Education alumnus and former USF Noyce Scholar Christopher Brunelle, MAT `18, received the Cox Educator Hero Award, an award presented to teachers who demonstrate dedication to the teaching profession and go above and beyond for their students.

“I am incredibly surprised and very humbled,” Brunelle said. “This is only my third-year teaching in the United States, so I’m honored that so many people thought that I was such a significant voice in education and that I deserved this recognition.”

Open to K-12 educators in the Virginia and Currituck County, North Carolina area, Brunelle and nine other educators were selected from a pool of 250 teachers who were nominated for the award.

Since arriving at Virginia Beach City Public Schools last year, Brunelle says he overcame many challenges while teaching biology completely online. Condensing his lessons, creating interactive presentations and providing his students with assignment choices are just a few of the ways he has kept his classes engaging.

“Instead of saying, ‘Here’s what you need to do (for this assignment),’ I say, ‘Here are five options, you pick whichever one appeals to you the most,’” Brunelle said. “I think that gives a lot of students agency because very often, especially with science, it’s like, ‘Do this my way and that’s the only way you could pass my class.’”

In celebration of the recipients, award sponsor Cox Communications will provide a $1,000 classroom makeover to each teacher—a generous donation that Brunelle plans to use when he starts teaching oceanography in the new school year.

“I’d like to set up at least four saltwater aquariums and use them for student-collaborative projects,” Brunelle said. “So, I’d like to work with this association called Pearl Schools to get the equipment necessary to start raising oysters and also local Chesapeake Bay species of fish like spot, menhaden, blue crabs and potentially seagrass or sponges.” 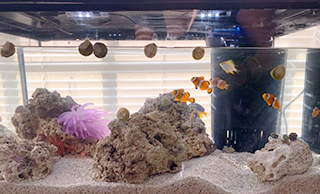 One of the saltwater aquariums Brunelle placed in his classroom at Middleton High School in Tampa, Fla.

Brunelle said he used this hands-on activity while teaching at Middleton High School, a Title 1 school in Tampa. He placed saltwater aquariums in his classroom and students learned about how they can care for the planet, similarly to how they took care of the animals in each tank.

When reflecting on his time as a graduate student in USF’s Science Education Program, Brunelle mentioned Distinguished University Professor Dana Zeidler, PhD, and Allan Feldman, PhD — “two powerhouses” that influenced him to become the educator he is today. Thanks to the guidance he received from his USF professors, Brunelle says he’s made a difference in more ways than one.

“It was just outstanding education, and the vast majority of my professors are experts,” Brunelle said. “Overall, they really prepared me for the responsibility of what I was going to be doing. I don’t think I necessarily realized the impact I could have as an educator going in, but I definitely left knowing I had the tools.”

Getting children excited to learn about science is important, Brunelle said, but for him, teaching students to be conscious of their actions towards the environment is far more significant.

“I’ve always been very much about environmental impact and making sure that students understand that we have a place in this planet,” Brunelle said. “(During this project,) one of my favorite quotes came from a student in Middleton who said, ‘you make me care about the earth, and I never cared about it before.’”