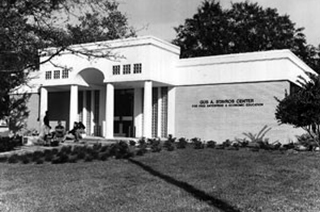 The Stavros Center, formerly called the Center for Economic Education, was established in 1975. It was established as a resource in support of school district efforts to provide free enterprise and consumer economics education in the classroom. As part of a state network, the Florida Council on Economic Education, and a national network, the National Council on Economic Education, the center would access resources in support of K-12 education. This effort was designed to involve K-12 educators in teacher training programs, curricula development efforts and other strategies to ensure that free enterprise and consumer economics concepts were reaching the students.

As the center grew in recognition and outreach to school districts and business supporters, it gained significant support. Because of the center’s long time commitment to involving business leaders in the education of K-12 educators about free enterprise and consumer economics, the center began a long history of building successful relationships with business leaders. One of those leaders was Gus A. Stavros, a successful entrepreneur who had distinguished himself as an international leader in the printing industry. Dr. Stavros, who holds an honorary doctorate from USF and from Florida State University, devoted considerable personal time, talent, and funds in support of economic education in Florida. In addition to his volunteer leadership role as the chairman of the Florida Council on Economic Education, he became very involved in supporting the mission of the USF center.

In 1989, Dr. Stavros and his wife, Frances, gifted $150,000 toward the construction of a building on the USF campus for the Center for Economic Education. With the Stavros’ contribution, additional funds were obtained, matched with state funds and a one-story building was constructed to house the center. Later that year, the Center was renamed in honor of Gus A. Stavros.

In subsequent years, the Stavros family has been responsible for two $1 million endowments, one that established the Gus Stavros Endowed Chair in Free Enterprise and Economic Education; the other to establish the Stavros Challenge Gift Endowment. The Center routinely receives private support from a myriad of corporate and individual donors.

In addition to private support, the Stavros Center receives financial support from the College of Education and from its state organization, the Florida Council on Economic Education.

Throughout its more than 40-year history, the Stavros Center has been recognized for excellence in economic education at the local, state, and national levels. It has received numerous awards by the Florida Council on Economic Education for best programming in statewide competition. The Stavros Center also has the distinction of being awarded the coveted national Leavey Excellence in Private Enterprise Award on three separate occasions. During its history, more K-12 educators from USF have received state awards in the FCEE Governor’s Awards program than in any other region in the state.