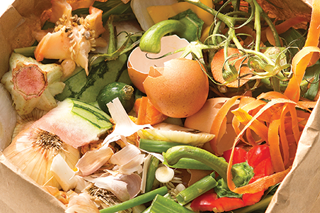 Food waste is a major environmental issue that can largely go unnoticed and unaddressed. But students at USF St. Petersburg are tackling the problem by installing an innovative system that will naturally break down non-edible food on campus – the first of its kind at a Florida university.

Called the ORCA system, the biodigester uses oxygen, water and microorganisms that flourish in cold water to decompose foods, from fruits and breads to eggs and chicken bones. The system, funded by the university’s student green energy fund (SGEF), will be able to break down as much as 15 pounds of food an hour and could divert more than 2,000 pounds of the university’s food waste per year from landfills.

According to the United Nations (U.N.) Food and Agriculture Organization, 30 percent of food is wasted globally across the supply chain, ending up largely in landfills where it decomposes slowly and releases methane, a greenhouse gas that is more potent than carbon dioxide. Food waste contributes up to eight percent of global greenhouse gas emissions, and the U.N. has stated if food waste was a country, it would be the third highest emitter of greenhouse gases on the planet.

“Every place that makes and prepares food obviously throws some of its items away, which in turn becomes a major contributor to greenhouse gas emissions and climate change,” says Emma Jacobs, a sophomore at USF St. Petersburg and vice president of SGEF. “The ORCA will decrease the amount of food waste at the university while also reducing our carbon footprint.”

Here is how it works: Food waste from the university’s cafeteria will be collected and loaded into the ORCA unit, which will reside in the dishwashing area of the cafeteria. The ORCA breaks down the food waste into smaller and smaller pieces until it is eventually transformed into a liquid effluent. The effluent – composed largely of water with broken down fats, proteins and minerals – is then safely filtered through a screen and discharged through the existing plumbing infrastructure and into the sanitary sewer system.

Unlike other food waste biodigesting systems, the microorganisms in the ORCA thrive in cold water, saving both energy and money with no need to heat water. The digestion process is aerobic, meaning driven by oxygen, and therefore does not produce methane.
Currently edible food leftovers at the university are collected and donated to local shelters by a student-led food recovery club. The ORCA will sustainably address the disposal of non-edible waste.

Louis Duran, general manager of dining services at USFSP, estimates that the university cafeteria generates about 40-50 pounds of non-edible food waste per week.

“Most of the food waste produced comes from preparing the foods, such as peels from vegetables,” Duran says. “We will educate our dining staff to now put this waste into bins throughout the day that will be dumped into the ORCA rather than in the trash.”
Students with SGEF will spend this semester educating all students on the new system. The goal is to instruct them to leave any uneaten food on their plate when returning it to the dishwashing conveyor belt, so this waste can be put into the ORCA.

“A lot of sustainability is about educating on doing things differently, so we will spend the semester informing our student body about this new way of sustainably disposing of food,” Jacobs says.

SGEF will also track data, which the ORCA calculates, such as the amount of food waste that is being diverted from landfills, to show the full environmental impact of the system.