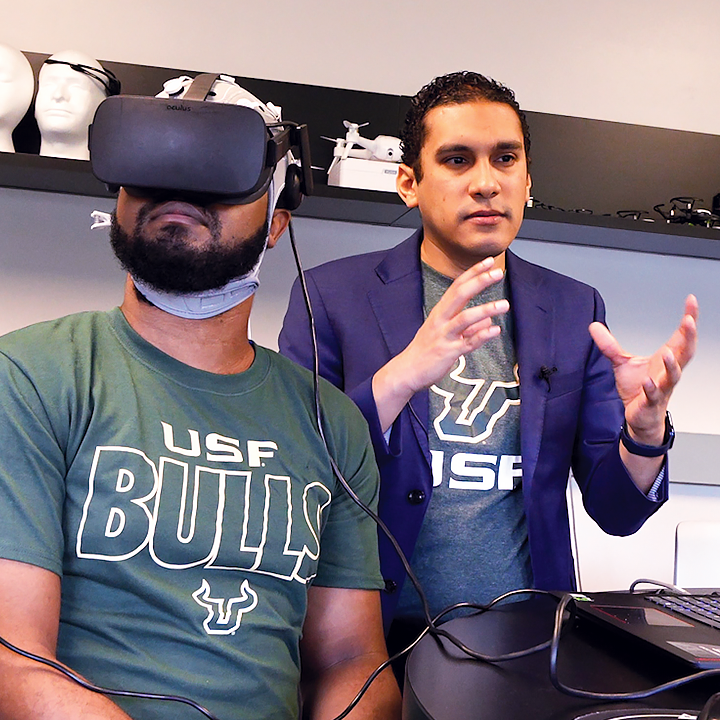 Photos: USF computer scientist Marvin Andujar, at right, is harnessing the power of concentration and art to develop a new brain-computer interface prototype and help study participants use their brains like never before. The goal is to introduce a novel treatment option for individuals with attention-deficit/hyperactivity disorder (ADHD) by tapping directly into their brain activity. [Photo: Sandra C. Roa, USF News]

By PENNY CARNATHAN ’82 | USF Advancement
The first time Tyree Lewis “painted” a red square on a digital canvas simply by looking at the shape he wanted, then the color, “I was really excited,” he says, cracking a big smile.

As a doctoral student focused on brain-computer interface, he’s accustomed to the notion of using the brain’s electrical activity to command devices, such as drones. But to actually experience it in this way? That was … mind blowing.

Lewis, MS ’21, volunteers for College of Engineering Professor Marvin Andujar’s brain-painting experiments, a project aimed at developing a drug-free therapy for people with attention-deficit/hyperactivity disorder, or ADHD. A common neurodevelopmental disorder, ADHD makes concentration and impulse control difficult, which can have devastating effects in school and on the job. Medications prescribed for ADHD often have adverse side effects, such as loss of appetite and trouble sleeping. 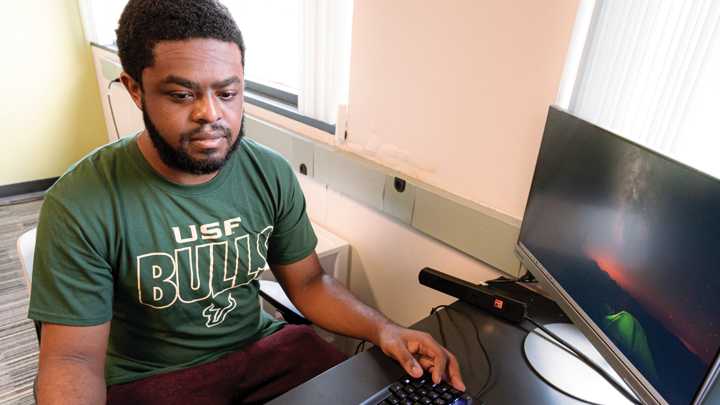 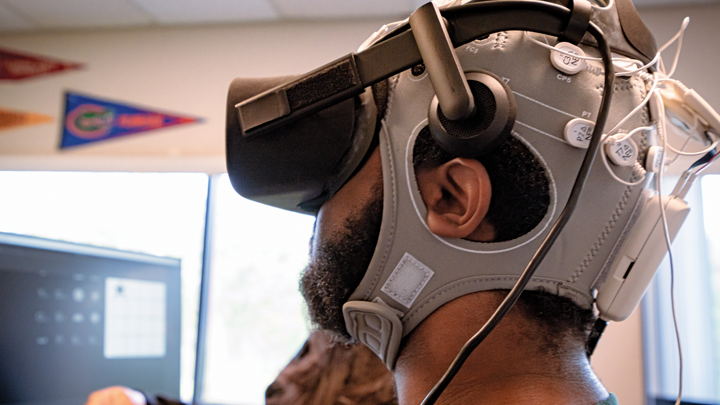 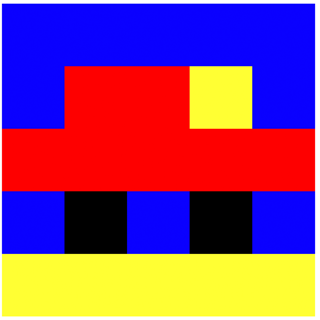 Brain-painters choose from colors, shapes or controls by concentrating on one at a time, and create images including the car pictured above.

While Lewis doesn’t have the condition, he can empathize. “Everybody gets distracted, especially in today’s world,” he says. His own attention challenge: reading research papers.

“I read research papers in the morning and I read them at night. Either way, I’m tired. Brain painting has helped me relax and focus.”

Brain-painters wear a cap lined with electrodes and focus on options presented on a computer screen. They choose from colors, shapes or controls by concentrating on one at a time. A blinking light lets them know their selection has been recognized, causing a stimulus spike in the brain that’s detected by the sensors. That electrical activity provides data used to create the user’s unique algorithm.

As the database grows, the algorithm becomes more robust, making the process faster and more accurate.

While the system is still being tested and optimized, results from a two-year pilot study funded by the National Science Foundation are promising.

“Doing brain painting makes me feel good,” one anonymous volunteer with ADHD wrote in an assessment. “It definitely helped me with my concentration. Recently, I was studying for my test, and I could feel that I could stay concentrated for longer periods of time than I could before.”