Changing Lives: For nurses and their patients, help is on the way 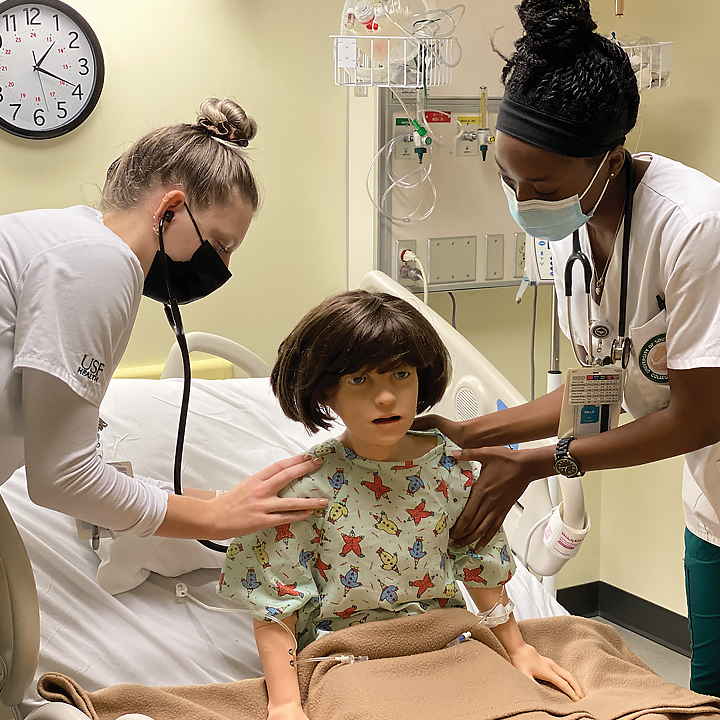 By PENNY CARNATHAN ’82  | USF Advancement
Nurses have been in short supply for the whole of Mina Folks’ career. But during the brutal first two years of the COVID-19 pandemic, as she watched colleagues question — and leave — the vocation they once cherished, the effects of the shortage became painfully apparent.

Twelve-hour shifts stretched to 16 hours. Patient caseloads grew. Overworked nurses struggled to battle a disease with no treatment and comfort patients isolated from loved ones. In some hospitals, overwhelmed supervisors offered little support.

“A lot of nurses were getting burned out. They rethink their profession, ‘Is this something I really want to do?’ ” says Folks, ’15 and MS ’20. “When they go home, they’re super stressed. They can never step away — they’re always thinking about it.”

As a longtime U.S. Air Force Reserve officer who has deployed overseas, Folks says she has the tools to cope. And Tampa General Hospital, where’s she’s worked since 2016, does a great job taking care of its employees. Still, she’s relieved the USF Health College of Nursing will vastly expand its enrollment capacity thanks to an infusion of $48 million in new state funding.

The money, expected to increase the number of USF nursing graduates by 200% over the next six years, will also address future needs.

“The nursing shortage is a national, decades-old problem exacerbated by the pandemic,” says nursing college Dean Usha Menon, senior associate vice president for USF Health. “Our faculty and staff have worked so hard over the past few years to maintain academic excellence, especially during the pandemic. Their work is being recognized and supported, and I’m so excited for our future!”

Making room for hundreds more students is a crucial step in addressing the nursing crisis, but the problem requires multi-faceted solutions, she adds. Among them is providing ample support for new graduates. The college is partnering with hospitals throughout the region to ensure they’re well-equipped to handle the stresses of a high-pressure job.

Folks hopes the state’s response and USF’s initiatives will become a model for other parts of the country. Patients will benefit, she says, but so will those who seek a challenging, rewarding career.

“You can’t go in expecting it not to be hard. It can be hard,” she says. “But I love helping people. I love making a difference. I would never want to leave this profession."