The University of South Florida (USF), in partnership with the National Defense University’s Near East and South Asia (NESA) Center for Strategic Studies and U.S. Central Command (USCENTCOM), hosts a semi-annual Great Power Competition Conference series to provide military and civilian policy-makers and thought leaders a broader understanding of the various national security challenges facing the United States in the 21st Century from near-peer global powers, i.e., China and Russia, as well as regional powers, such as Iran and North Korea, through a forum that brings together strategic thinkers, scholars, leaders, and subject matter experts.

The Great Power Competition: Two-Decades after 9/11: The Attack and the U.S. Military/Diplomatic Response

This 4th Conference, which will commemorate the twentieth anniversary of the September 11, 2001 terrorist attacks on the U.S., will focus on the day of those attacks and our immediate military, diplomatic, and strategic response. This GPC Conference is the first of a two-part series, with a second conference (tentatively scheduled for April 2022) exploring the longer term political, organizational, legal, and geostrategic implications of 9-11 that have impacted and continue to impact the central Asian region.

While many saw the 9/11 attacks as a seemingly random act of terrorism that literally came out of the clear blue September sky, the roots of this tragic event on American soil have been developing for years. Accordingly, Day One of the September event will address the conditions leading up to the attacks, the attacks themselves, and our country’s immediate military and diplomatic reaction to them. Day Two of the conference will explore the strategic response to the attacks and begin a dialogue on the longer-term, focusing on the ensuing “Global War on Terror” and the lessons the U.S. learned during those eventful years, not just in the Middle East but in our country’s competition with near-peer nation states Russia and China, and their proxies. 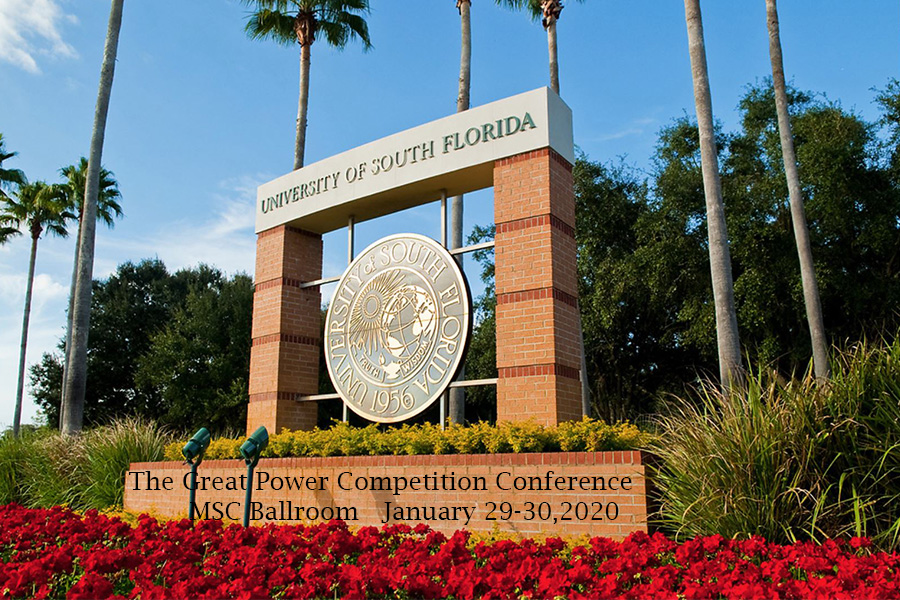 The inaugural conference, which was held on January 29-30, 2020 at the University of South Florida's Tampa campus, provided an innovative forum for strategic thinkers, scholars, leaders, and subject matter experts to discuss, collaborate, and provide perspectives on each of the Great Powers' ability to influence the political, security, and economic issues in the Central Region. Once a central point of competition in the 19th Century "Great Game" between the Russian and British Empires, with Afghanistan as the "pull-and-tug" buffer zone, the Greater Central and South Asia regions have once again become the theater for a great power competition for influences, resources, and interests with the new actors involving the Global Powers: the United States, China, and Russia along with the Regional Powers: Iran, India, Pakistan, Turkey, and the Central Asia and Arab countries. Read More...