Past events have included:

A DISCUSSION ON CAREERS INVOLVING RUSSIA FEATURED ARTIST: SZABOLCS KISSPAL
Szabolcs KissPál is a Hungarian artist based in Budapest. His work engages with the social and political circumstances in which he lives and the role of the artist in society, particularly in the post-communist world. KissPál's recent works question not only the legacy of Communism but also the legacy of the recent failures of capitalism. Like many artists in former eastern Europe his work displays some ambivalence about the current situation as well as hope for a more structured and controlled continuing emancipation. KissPál works with photography, moving image and sculpture. kadist.org/people/szabolcs-kisspal/

USF-USSOCOM FORUM ON RUSSIAN, EUROPEAN AND US SECURITY (REUSS)

SESSION 1: "The History and Challenge of Russian Disinformation"

FEATURED ARTIST: VLADIMIR TSESLER
Vladimir Tsesler is one of the most famous Belarusian artists. He is a designer and creator of art objects with about 40 international awards in the field of poster, book and advertising. His works have gained worldwide fame and are stored in the collections of many museums including The Musée de la Publicité, a museum of advertising history located in the Louvre's Rohan and Marsan wings. Mr. Tsesler uses ridicule, humor and even sarcasm in his art work.

SHOSTAKOVICH AND THE LENINGRAD SYMPHONY FEATURED ARTIST: VICTORIA LOMASKO
Victoria Lomasko is a a muralist and graphic reporter, whose 2017 book, Other Russias, attracted widespread reviews and attention, including coverage in The New Yorker, the LA Review of Books, and The Calvert Journal. Other Russias also won the 2018 Pushkin House Prize for the best book in translation. In 2019, Vika visited the Melikian Center and the Havighurst Center, where she created the mural Atlases for the King library. In September 2020, Victoria Lomasko spent time in Minsk, Belarus, covering the extended civic activism protesting the rigged August election results. 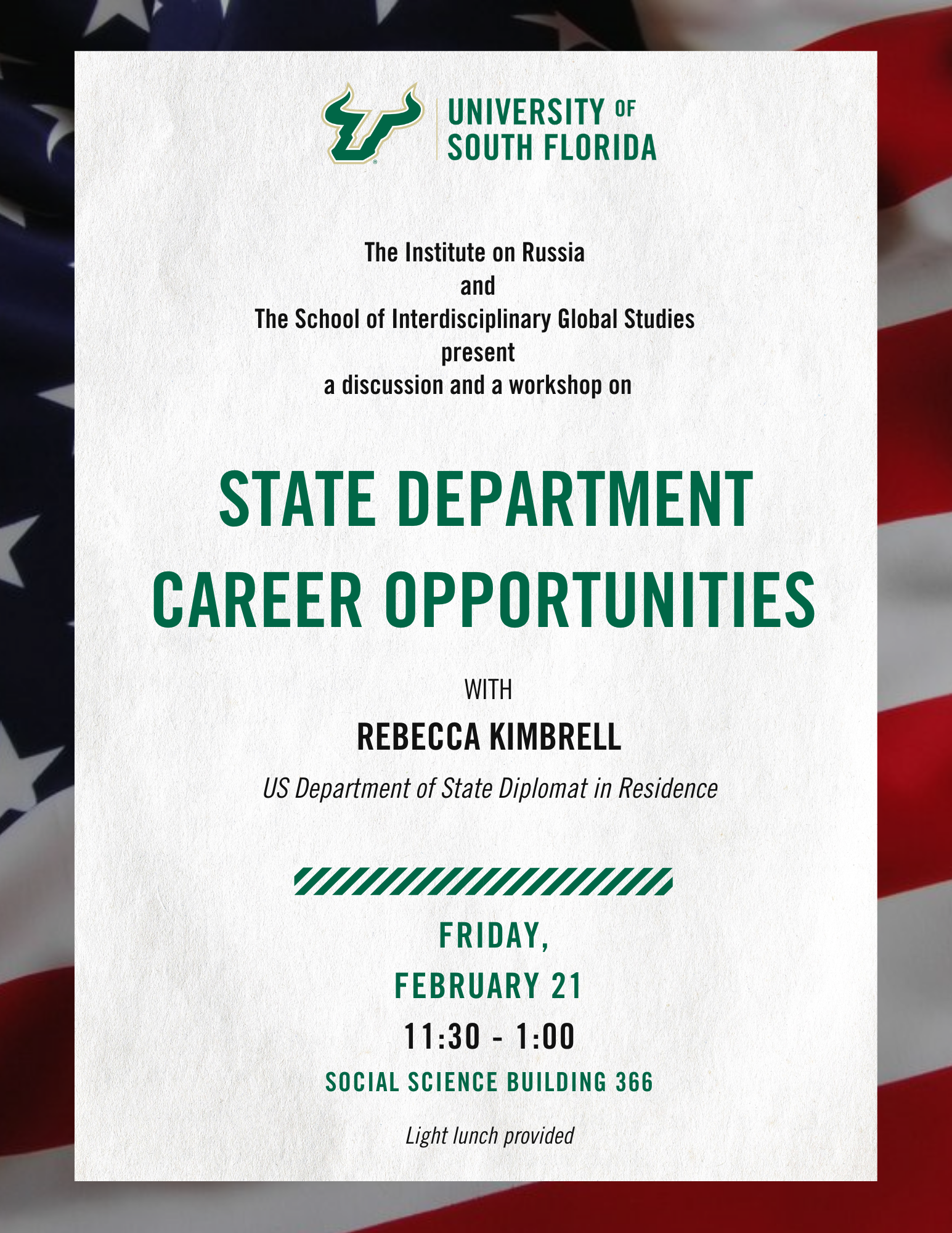 golden gates authentic glimpse into into the russian folklore through music, song, and dance The USF Institute on Russia sponsored the participation of Ronald Suny at the Saint Petersburg Conference on World Affairs. A professor at both the University of Chicago and the University of Michigan, Dr. Suny’s research has centered on the non-Russian nationalities of the Russian Empire and the Soviet Union, particularly Armenia, Azerbaijan, and Georgia. An expert on nationalities policy as well as the Armenian genocide, Dr. Suny has received many awards, including the John Simon Guggenheim Memorial Fellowship.

February 18-21, 2020 - USFSP Student Center. Dr. Suny served on two panels at conference, one on Wednesday 2/19 and one on Thursday 2/20. For a complete conference schedule, see the Saint Petersburg Conference on World Affairs.

Political scientists and professors Valerie Sperling and Lisa Sundstrom discussed their new book. Based on interviews with human rights activists and lawyers in Russia and Turkey, the book explores the obstacles that confront Russian and Turkish citizens, activists, and lawyers who try to bring gender discrimination cases to court. To shed light on the factors that make rare victories possible, the book draws comparisons among forms of discrimination faced by women and LGBT people in Russia and Turkey.

The talk took place on Thursday, January 30, at 12:30-1:45pm, in the Marshall Student Center, Room 3707, with a reception. This event was co-sponsored with the Department of Women’s and Gender Studies.

William Burke-White is the Richard Perry Professor at the University of Pennsylvania Law School. An international lawyer and political scientist, he has significant regional expertise on Russia and Eastern Europe. From 2009-11, Burke-White served in the Obama administration on the Secretary of State’s Policy Planning Staff. While at the State Department, he was also responsible for issues related to U.S. engagement with the G-20, the G-8, and the United Nations, as well as U.S. policy toward the Russian Federation. Award-winning film, “Women of the Gulag” and discussion with the Director, Marianna Yarovskaya

Russian director Marianna Yarovskaya's film was shortlisted for an Academy Award for best documentary short. The film premiered in Moscow and London and is scheduled to appear on network TV in Russia and Korea. Ms. Yarovskaya was present for a film screening and discussion, Monday, November 4th, 12:30-1:45   /   Marshall Student Center, room 3707

This event was co-sponsored with Russian Heritage. 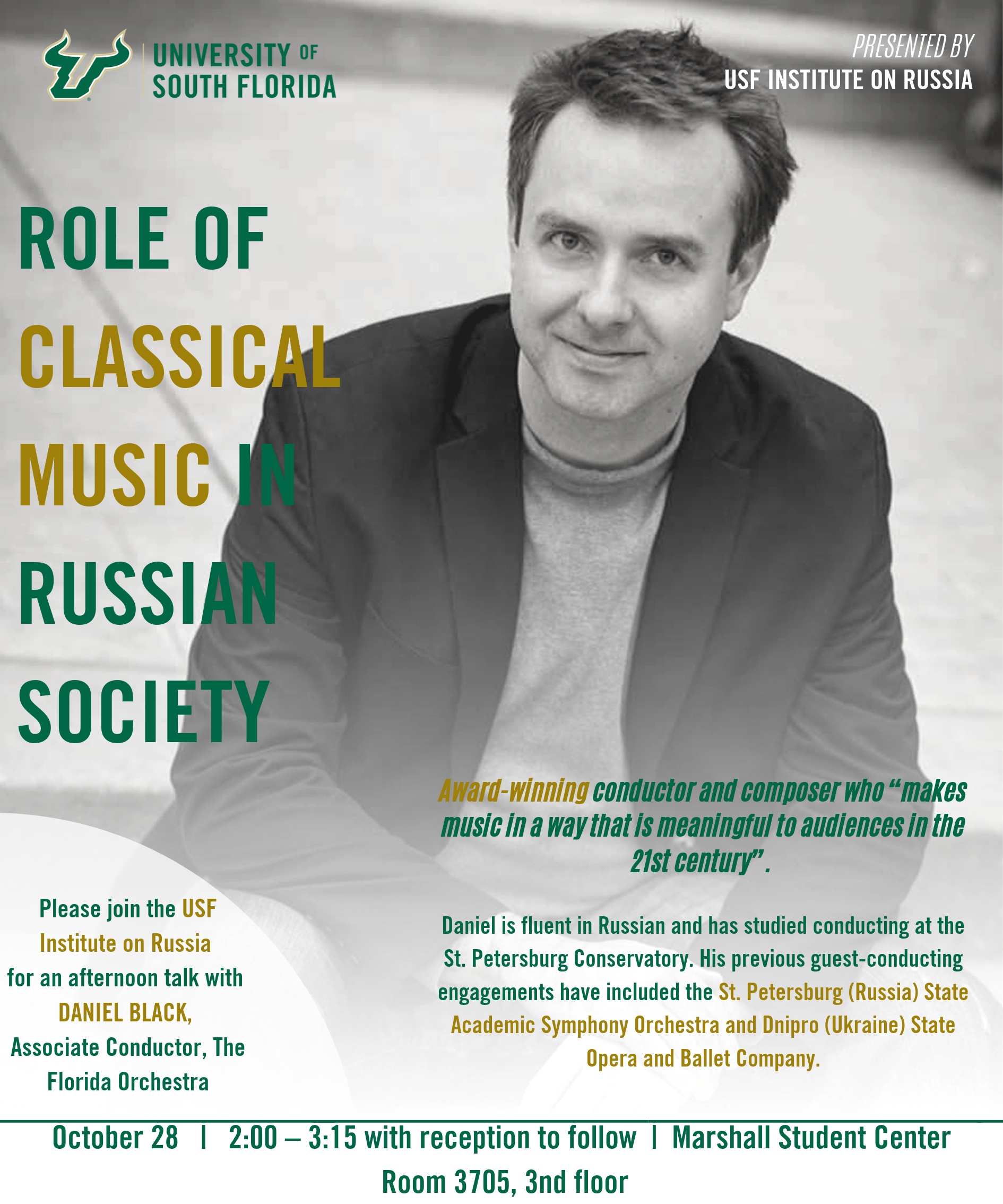 Russian investigative journalists and authors, Andrei Soldatov and Irina Borogan, are experts on the Russian security services and the founders of the website Agentura.ru. They spoke about contemporary Russian politics, drawing upon their recent books, Red Web: The Struggle Between Russia's Digital Dictators and the New Online Revolutionaries and The Compatriots: The Brutal and Chaotic History of Russia's Exiles, Emigres, and Agents Abroad. This event took place on Wednesday, October 23rd, 12:30-1:45pm, in TECO Hall in the USF College of Education Building. 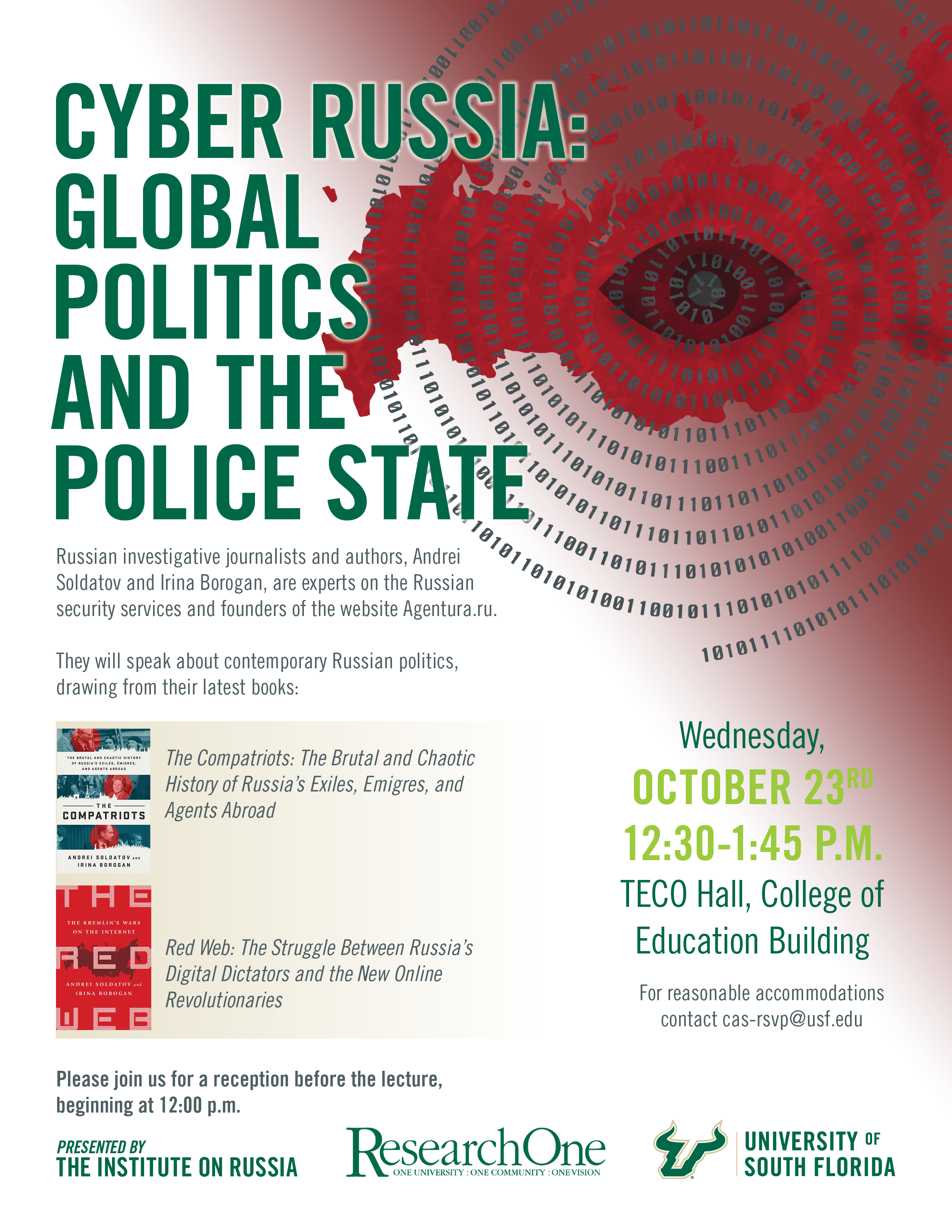 Vladimir Kara-Murza is vice chairman of the Open Russia movement and chairman of the Boris Nemtsov Foundation for Freedom. He was a longtime colleague of Russian opposition leader Boris Nemtsov. Kara-Murza is a former deputy leader of the People's Freedom Party and was a candidate for the Russian State Duma. He holds a master's degree in history from Cambridge University and has published several works. He also directed two documentary films, including Nemtsov (see film screening below).

Mr. Kara-Murza has testified before parliaments in Europe and North America, and played a key role in the passage of Magnitsky Laws that imposed targeted sanctions on Russian human rights violators in the U.S., Canada, the United Kingdom, and other Western countries. Twice, in 2015 and 2017, he was poisoned with an unknown substance and left in a coma; the attempts on his life were widely viewed as politically motivated. A contributing writer for the Washington Post, he has previously worked as a journalist for Russian broadcast and print media.

A friend of John McCain, Vladimir Kara-Murza was asked by the late Arizona senator to be a pallbearer at his funeral. Mr. Kara-Murza is a recipient of the Magnitsky Human Rights Award, the Sakharov Prize for Journalism as an Act of Conscience, and the Geneva Summit Courage Award. In commemoration of the 100th year anniversary of the birth of the great Russian writer Aleksandr Solzhenitsyn, this event explores his magisterial multi-volume work, The Gulag Archipelago. USF professor Golfo Alexopoulos will discuss the importance of Solzhenitsyn's analysis of Stalin's Gulag as well as the writer's comparison between the Nazi and Soviet camps. Dr. Alexopoulos will be joined by USF professor Dr. Victor Peppard and USF instructor Evguenia Davenport for a reflection on Solzhenitsyn's novels and legacy in Russia.

This event is co-sponsored with the Florida Holocaust Museum How to Make a Revolutionary Object: The Drawings of Gustavs Klucis by Dr. maria gough

Dr. Gough is the Joseph Pulitzer Jr. Professor of Modern Art at Harvard University. Her primary area of research and teaching is early twentieth-century modern European art, with a particular emphasis on the Russian and Soviet avant-gardes.

From 2015-17, Dr. Gough was a scholarly consultant in the preparation of the Art Institute of Chicago's centenary exhibition, "Revoliutsiia! Demonstratsiia! Soviet Art Put to the Test," which opened in October 2017, and also contributed two essays to its accompanying catalog edited by Matthew Witkovsky and Devin Fore. In 2017-18, she was the Mellon Visitor to the University of Chicago and the Art Institute of Chicago, leading workshops for their Chicago Object Study Initiative (COSI). Before joining the Harvard faculty in 2009, Dr. Gough was Associate Professor of Art History at Stanford University (2003-2009). A Guggenheim fellow in 2015-2016 and prolific author, Maria Gough is on the Editorial Board of the journal Modernism/modernity and the International Advisory Board of the journal Art History.

Her talk is titled, "How to Make a Revolutionary Object: The Drawings of Gustavs Klucis." It focuses on a corpus of presentation drawings for new media-driven structures for the revolutionary street: radio-orators, projection screens, advertising stands, slogan signs, and newspaper kiosks. Executed in the early 1920s by Gustavs Klucis (Gustav Klutsis), a Latvian immigrant to Moscow who would later enjoy renown as the leading Soviet photomonteur of the interwar period, these striking drawings have long captivated artists, architects, and designers due to their optical dynamism and graphic presence. Robert Courtney is a globally successful entrepreneur, business leader, and senior strategic and legal advisor, with more than 25 years of experience in international business, including Russia and Eastern Europe. He will give a talk on "Doing Business in Russia."

Mr. Courtney established the first Western medical and dental centers in Russia and Azerbaijan, the first international real estate brokerage network in Russia, and the several new-to-Russia retail brands, including Le Pain Quotidien. He served on the Board and Executive Committee of the American Chamber of Commerce in Russia, which advances the US-Russia commercial relationship through advocacy and business-friendly regulatory improvements.

Mr. Courtney will speak to two classes as indicated below, but all USF students are welcome. Ambassador John Beyrle served as an American diplomat for more than three decades in foreign postings and domestic assignments focused on Central and Eastern Europe, the Soviet Union, and Russia. He was twice appointed ambassador: to Bulgaria (2005-08) and to Russia (2008-12). Ambassador Beyrle's diplomatic service included two earlier tours at the U.S. embassy in Moscow, including as deputy chief of mission. He also served as a counselor for political and economic affairs at the U.S. embassy in the Czech Republic, and a member of the U.S. delegation to the CFE arms control negotiations in Vienna.

His Washington assignments included a special adviser to the secretary of state for the New Independent States, and director for Russian, Ukrainian and Eurasian affairs on the staff of the National Security Council. He traveled extensively with Secretaries of State George Shultz and James Baker as a staff officer in the 1980s and served as a Pearson Fellow and adviser to Senator Paul Simon, a senior member of the Senate Foreign Relations Committee.

Ambassador Beyrle received the Presidential Meritorious Service Award during the Administration of George W. Bush, and the Presidential Distinguished Service Award from President Obama. Secretary of State Clinton presented him with the Distinguished Service Award, the State Department's highest honor. He retired from the Foreign Service in 2012. Ambassador Beyrle serves on the board of directors of the U.S. Russia Foundation for Economic Advancement and the Rule of Law and provides consulting services to non-profit and corporate clients. Lecture and dinner by legendary journalist and author marvin kalb The centennial of the 1917 russian revolution with dr. frederick corney