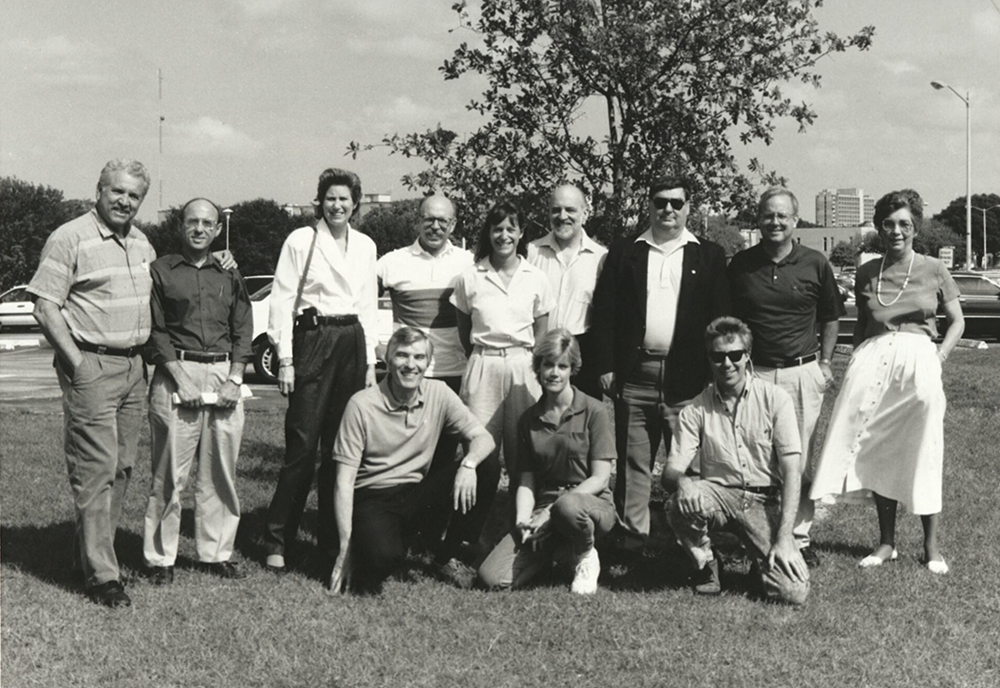 Carl Hawkins, DPA was one of the first students to take classes in Criminal Justice when the University of South Florida (USF) began the program in 1972. He recalls that tuition that year was only $195 per quarter and that, like many in the ‘70s, he wore his hair long – down to his shoulders – with bell bottom jeans, tie-dye shirts, and buffalo sandals. 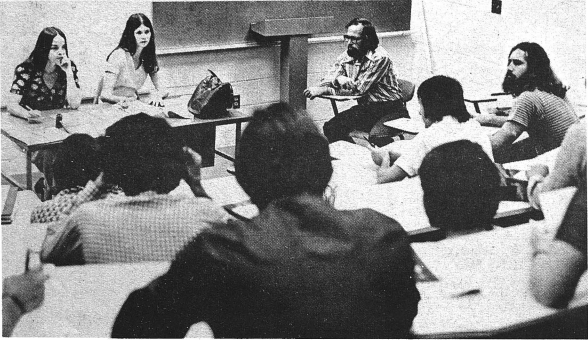 Carl Hawkins participates in a Social Sciences Advisory Board Meeting in 1974. Photo by Chris Malone, The Oracle, Jan. 31, 1974.

When the university welcomed Hawkins and his fellow students 50 years ago, campus also looked quite a bit different from the grounds that students and faculty see out their windows today. There were few buildings – so few that the Criminal Justice program was housed on the second floor of a nearby apartment complex and course registration was held at the USF indoor swimming pool.

“They had these bulletin boards all the way around the pool and students would pick their classes out,” says Hawkins, who signed up for courses titled Survey of the Criminal Justice System and Nature of Crime that quarter. “Someone would markup which classes were still left, and you’d write down your choices and hand it in at the end.”

“We also insisted that our curriculum prepared the students for what was coming next,” says Blount. “Whether they were going on for a master’s degree and doctorate for an academic career or they were going to go out to a professional career in something like law enforcement, corrections, pre-law, or juvenile justice, we wanted to make sure our curriculum prepared them so they had some idea of what they were getting into.”

It wasn't very long until the “big three” were joined by Ira Silverman, PhD, Leonard Territo, EdD, and Tim Riley, JD to form what is still, to this day, warmly known as the “six pack.” In its earliest years, the program drew a high level of interest from veterans returning from the Vietnam War as well as current and hopeful law enforcement officers with an interest in pursuing additional education through the Law Enforcement Education Program, a Department of Justice program designed to support criminal justice personnel needs. These students learned from faculty with a variety of backgrounds, including law, education, psychology, and sociology, and those with law enforcement backgrounds who were able to lend their meaningful real-world experience and knowledge to the classroom.

“You want to know why people go into this field?” asks Territo, who brought decades of  law enforcement experience to his lectures, including his work as an advisor to the investigation that took down notorious serial killer Ted Bundy. “It’s fascinating. I’ve done so many different kinds of things, and those stories are valuable because they make the information relevant. If I can give you a context, it means more to you as opposed to some cold, sterile chemical formula that’s up on the board.” 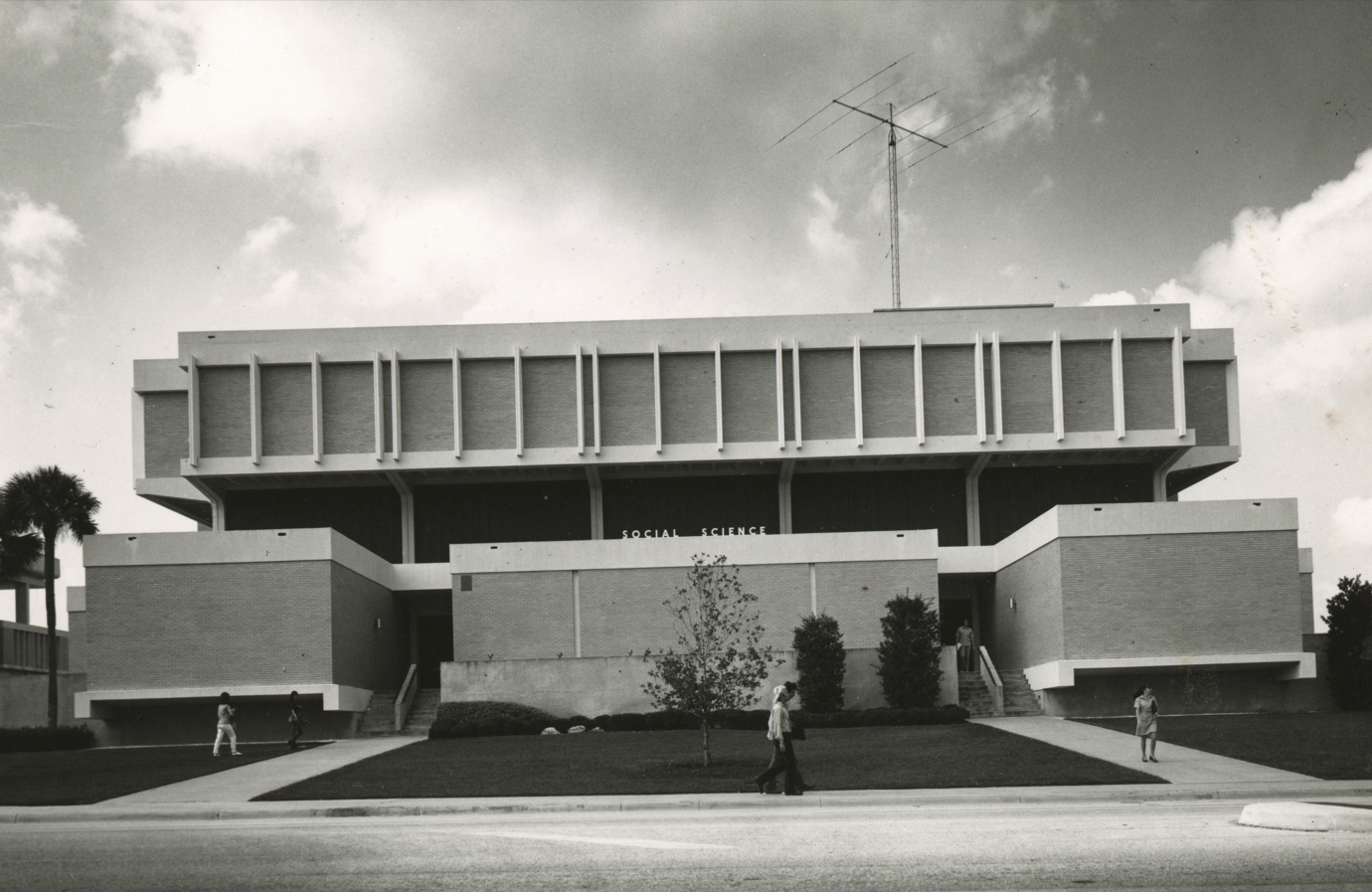 Criminal Justice moved onto campus and was first housed in the Behavioral Sciences Building and then the Social Science Building (pictured), where it remains today.

As USF expanded, so did the Criminal Justice program. Eventually, Criminal Justice moved into a new home on the Tampa campus – first the Behavioral Sciences Building and then the Social Science Building, where it remains today. A master’s program was added in 1974, and, along the way, the Criminal Justice program became the Department of Criminology, with a more theoretical, social, and behavioral science focus. Additional faculty with diverse backgrounds including criminology were welcomed to round out the interdisciplinary group. Then, in 1998, the department became the second in the state of Florida to offer a PhD in Criminology.

Dwayne Smith, PhD, who recently returned to the department as a professor after serving for a number years as senior vice provost and dean of the Office of Graduate Studies at USF, joined the Department of Criminology in Fall 2000 to serve as chair and helped to develop the PhD program, increasing its national exposure.

“We had a lot of discussions early on about what it meant to be a PhD program, and it wasn’t just offering more courses,” he says. “It really did involve a shift in the culture of the department. We had to have a greater level of visibility. I think it’s fair to say that department has evolved right along with the university in terms of its identity.”

It was the promise of a growing department within a growing university alongside a growing city that was attractive for many of those faculty members who joined in early to make the Department of Criminology great.

“It was a long journey and a lot of work, but I really wanted to be a part of that. I wanted to go someplace where I felt I could make some kind of impact,” says Professor Emeritus Tom Mieczkowski, PhD. “I certainly had opportunities to go to other places, but I felt like here, I could really make a personal difference. There was a real dynamic here of expansion, and I knew this young program would grow.” 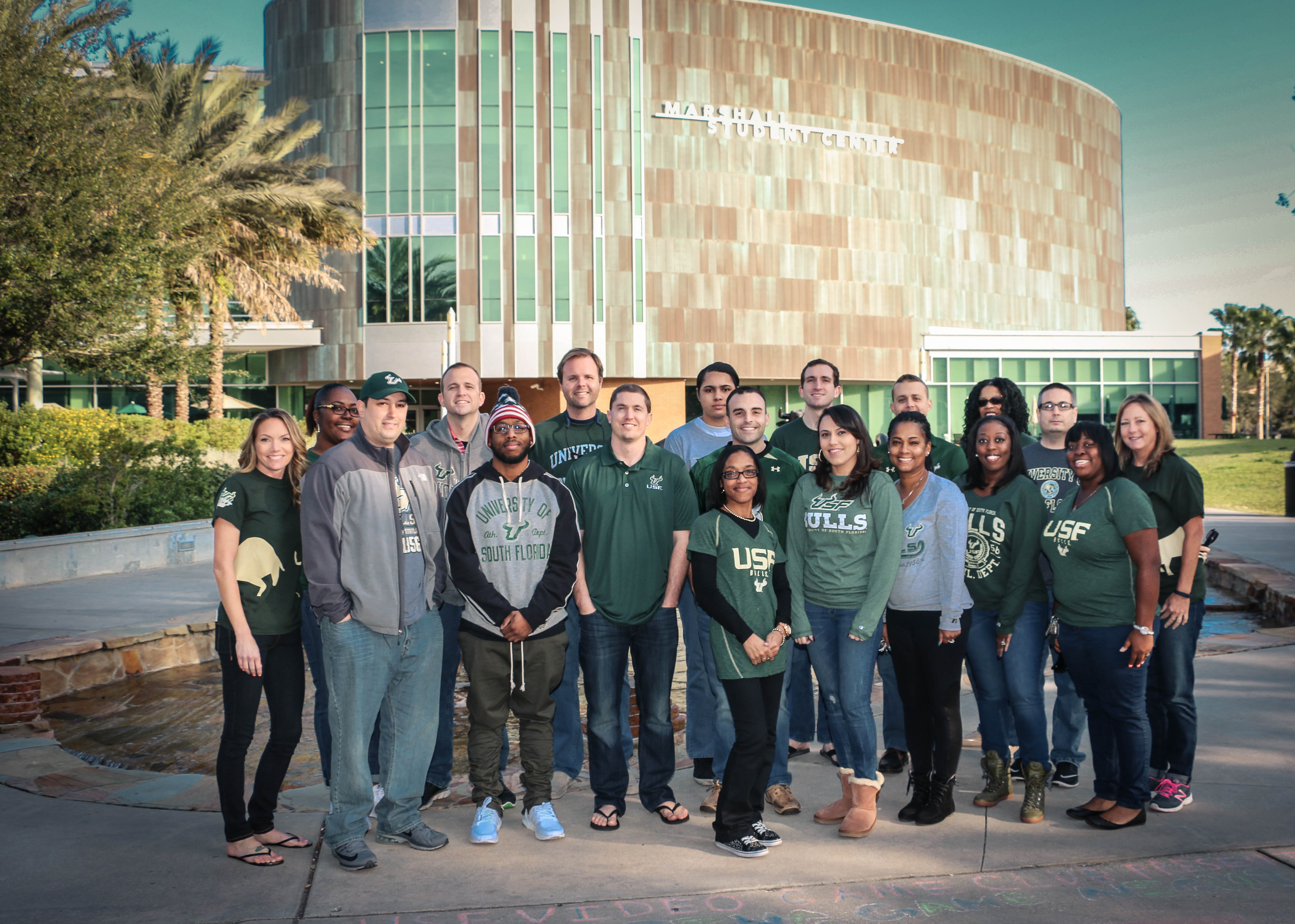 The Master of Arts in Criminal Justice Administration at USF began in 2006 and caters to a unique student population – working professionals in the criminal justice field.

Another important development for the department was the start of the Master of Arts in Criminal Justice Administration (MACJA) degree in 2006, which caters to a unique student population – working professionals in the criminal justice field. Directed by Max Bromley, EdD, associate professor emeritus, who was first the associate director of public safety at USF, the MACJA program enhances current criminal justice practitioners’ technical skills, decision-making processes, and analytic capabilities.

“What I really like about it is that I’ve got the background so I can give some personal thoughts on things that you can’t necessarily get out of a textbook. That’s what makes it fun,” says Bromley. “They’re the future, and I’m just trying to get them to think long beyond where they are now.”

Over the past five decades the Department of Criminology has not only enriched the lives of those who have studied, taught, and worked there, it has also had a tremendous local, national, and international impact.  From work on family interventions in the juvenile justice program to drug use prevention, to internships with agencies in the area, the intersection between research and community has led to valuable partnerships.

“I was truly wedded to the community through the services we provided in health and delinquency issues in youngsters and felt a commitment to try to make things a little bit better for them,” says Richard Dembo, PhD, professor in the Department of Criminology. “I felt we made some important improvements.”

These connections over the years have also enhanced courses. Kathleen Heide, PhD, distinguished university professor and the first female tenured professor in the department, remembers working with her local and national community connections to include guest speakers in her courses, from public figures to politicians and FBI agents, to talk about relevant legal and law enforcement issues. She introduced live demonstrations from the S.W.A.T. team and took students into the medical examiner’s building and onto death row to speak with death row inmates.

The longevity of the Department of Criminology, and of many of its affiliated professors, has led to opportunities for groundbreaking projects that have spanned decades. As a young faculty member, one of Heide’s first grants when she joined the faculty of USF in the 1980s involved interviewing children who were convicted of homicide or attempted homicide and were sentenced to prison. Fifteen years later, and then again 30 years later, she followed up with these children, who are now adults, to find out what happened to them, including whether they had been re-arrested or sent back to prison on other charges.

“From the standpoint of research, it’s the longest that has ever been done. Certainly, the largest,” says Heide. “It’s the environment at USF that allowed me and others to do things like that.” 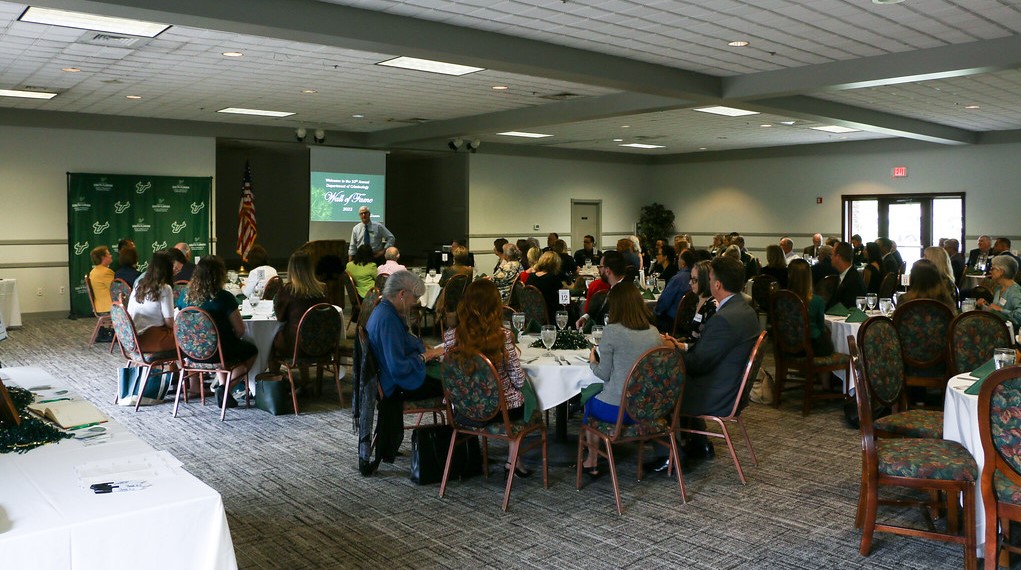 The Department of Criminology honors a select group of alumni and community partners who have distinguished themselves by attaining the highest level of professional accomplishment while demonstrating strong personal integrity and character at its annual Wall of Fame ceremony.

Today, the Department of Criminology offers a variety of undergraduate, graduate, and professional training programs on multiple campuses and online. It is home to more than 1,200 students, with its graduate program ranked #18 by US News and World Report. Thirty well-respected faculty members have continued the department’s success, contributing to many current and emerging topics including macro- and micro-level models of criminal behavior, victimology, race, violence, juvenile justice, corrections, and radical and green criminology.

“I see the Department of Criminology having followed a developmental trajectory or life-course parallel to that of the University of South Florida itself – with an audacious start and a bright and promising future,” says John Cochran, PhD and current chair. “What started as an ambitious foothold on Florida’s Gulf Coast has become a national and international leader.”

“We maintain the roots established by the ‘six pack’ of inspired graduate and undergraduate instruction that confronts both classical and critical contemporary issues in criminology and criminal justice while preparing our graduates to become productive citizens,” Cochran continues. “But we also have wings to the future in the cutting-edge, meaningful, and impactful research of our faculty and graduate students. We continue to be eager and effective partners to agencies and organizations in our community, the state, and the country. We are also blazing new trails in the development of important new degree programs in cybercrime and digital forensics, crime prevention, and victimology. Our future is gold – green and gold.”