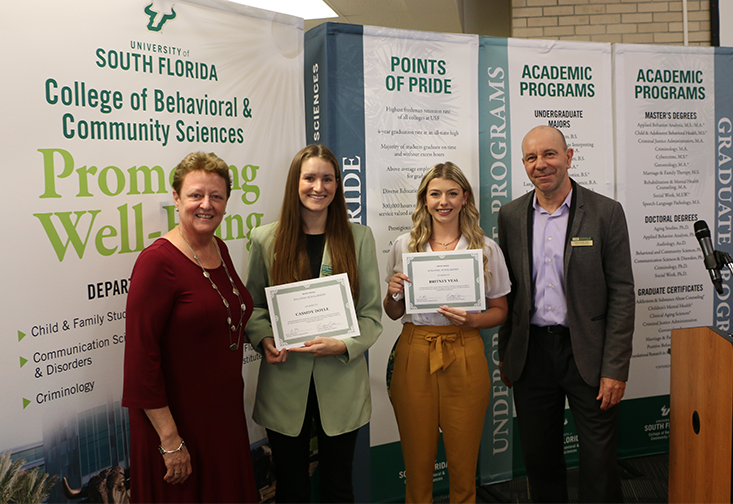 Last Friday, the School of Aging Studies hosted its first in-person event since the pandemic began. During the Preceptors & Awards Reception, faculty, staff, students, and community partners were honored for their outstanding contributions to the field and to the school's success.

Eight fellowship and scholarship awards were presented to Aging Studies students during the reception. The Wiley P. Mangum Scholarship in Gerontology was given to undergraduate students Jennifer Hurtt and Christina McVay to encourage the furthering of their education in the field of gerontology. The Kymberly Jane Harris Endowed Scholarship in Long Term Care Administration was presented to Kaylie Manikis to support her education in long term care administration. Haley Campbell received the Tollette Family Endowed Scholarship in Gerontology, which recognizes upper-level undergraduate students who have demonstrated significant scholarly achievement.

The Wolowec Scholarship was presented to graduate students Britney Veal and Cassidy Doyle. This scholarship was established by Oksanna Wolowec, who wanted to make a positive impact on the lives of students who have committed themselves to the study of aging. Manninkattil Unni received the Harold L. Sheppard Endowed Memorial Scholarship. The Kenneth E. and Peggy Sponagle Endowed Scholarship was awarded to graduate student Ryan Matipano to recognize his outstanding academic achievement and commitment to a career in aging. Charity Lewis received the Kathryn Hyer Endowed Memorial Scholarship in Public Policy and Aging, a newly established scholarship to honor the late Dr. Hyer and support students who have demonstrated a commitment to working to improve public policy affecting older adults. Christina Mu was awarded the H. Edward Greely and Mildred Greely Endowed Fellowship in Aging Studies, which promotes research and doctoral education surrounding the conditions that impact older adults' ability to live independently.

Additonally, graduates and community partners of the school were recognized for their commitment to students and the field of gerontology. The Outstanding Alumni of the Year Award was presented to the late Kevin Hansen, PhD, who completed his doctoral studies at USF in 2015. The Community Partner of the Year Award was given to Robin Ingles, CEO Seniors in Service of Tampa Bay, and the Kathryn Hyer Professional Mentorship Award was given to Veronica Maxwell, M.Ed, from the Hillsborough County Department of Aging.

Certificates of appreciation were presented to preceptors in the community that have served as mentors and guided Aging Studies students in internships. Bill Haley, PhD was also recognized with the USF Outstanding Faculty Award. Finally, representatives of Sigma Phi Omega, Forever Friends, and the Student Association for Aging Studies spoke during the reception, providing updates about the activities of each organization.