Celebrating 50 years of CRMHC: Meet one of the program’s first graduates 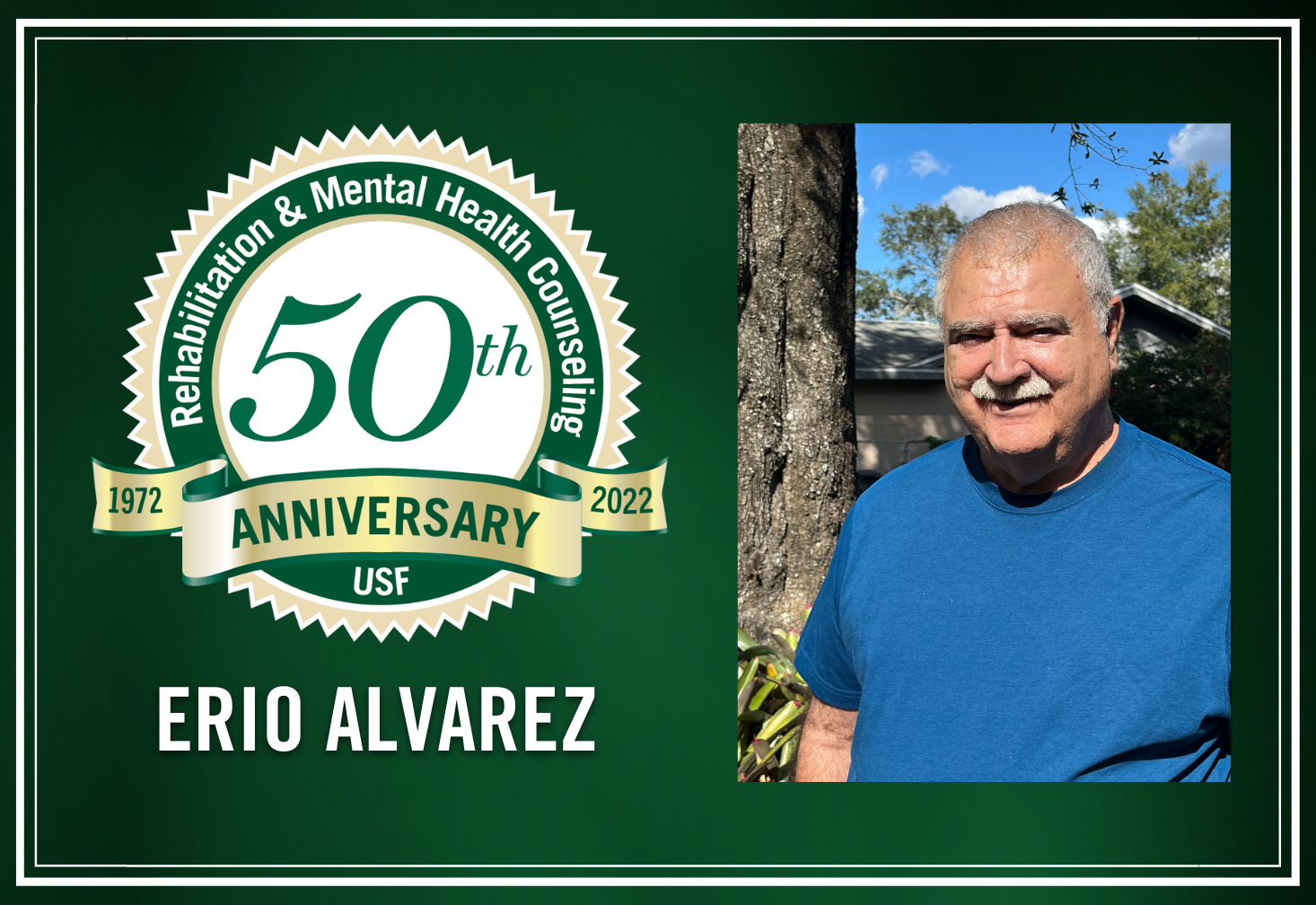 When the very first cohort of rehabilitation counseling students at the University of South Florida (USF) graduated, among them was Erio Alvarez, a recent veteran whose degree would advance his trailblazing career in corrections.

Alvarez was born and raised in Tampa. After receiving his Bachelor of Science in Psychology with minors in biology, sociology, and English from the University of Tampa in 1963, Alvarez joined the Florida Probation and Parole Commission, which later became known as the Florida Department of Corrections. Three years later, he was drafted into the Army and was assigned to the 3rd Armor Division, 45th Medical Battalion. As part of the Mental Health Consultation Service, he reported to the division psychiatrist and social work officer. There, with supervision and support, he assisted soldiers in mental distress and gained experience, at just 24 years old, that he describes as “invaluable.”

When his military service ended, Alvarez returned home and to his job in corrections and was eager to begin graduate school at USF. His roadblock? The Graduate Record Examination, or GRE. Because of his score, Alvarez was turned away from the psychology and sociology departments; however, his persistence brought him to a new, better suited program called Rehabilitation Counseling.

“I met with Dr. Cal Pinkard, the program director, and learned that the program was exactly what I was looking for,” says Alvarez. “They were enthusiastic and wanted to do ‘people stuff.’ That was what I wanted, too, to be hands-on in my chosen field of community corrections.”

While rehabilitation counseling courses later moved to the College of Social Science on the Tampa campus, the first class Alvarez took was held in a small conference room on USF’s St. Petersburg campus. He recalls using reel-to-reel tape recorders to document group counseling sessions that would be reviewed and critiqued in class as part of the interactive learning style he enjoyed.

“The entire program was challenging, engaging, informative – just dynamite,” says Alvarez. “There was a heavy emphasis on counseling and group counseling. I was already doing group sessions with offenders before I started in the program, and it just added to my knowledge and skills.”

Alvarez used his undergraduate education, work experience, and military background to establish the first halfway house for offenders in Florida operated by a state agency. His master’s degree in rehabilitation counseling enhanced his clinical and operational skills that led to several innovative initiatives, including the expansion of the halfway house to include female professionals and residents, making it the first co-ed program in the state. Alvarez’ 43-year career included various leadership roles in community corrections and culminated in the role of criminal justice specialist for Hillsborough County government.

“My interest was always about people,” says Alvarez. “The master’s degree in rehabilitation counseling further showed me the importance of that and why it was also so important to be an advocate for offenders. It was important to give offenders the opportunity to succeed but also hold them accountable."

He recalls the various ways he supported offenders in their time of need: driving a newly released prisoner to get an identification card required for a job, making connections in the community that would help offenders find jobs and other resources, and fighting for educational opportunities to set them up for success.

Today, USF’s Clinical Rehabilitation and Mental Health Counseling (CRMHC) program is celebrating its 50th anniversary, and Alvarez is enjoying a well-deserved retirement. Although much has changed over the past five decades, the importance of this program has not, according to Alvarez.

“As I look around and see the need for people to have skilled and caring professionals to talk to, I see we still need this valuable profession,” he says. “I hope you can tell I had the best experience in the Rehabilitation Counseling program. It made me a better professional.”