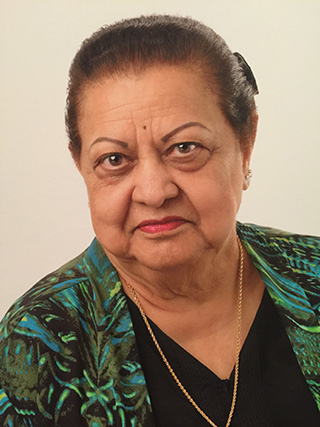 Dr. Mohinder “Mona” Jain, MD, PhD `84, has dedicated her career to the field of education and serving as a fearless advocate for her students. An immigrant from India, Jain has served as both a teacher and administrator for American, British and Indian educational systems since 1961, and has given countless years of service to schools across the state of Florida. To celebrate her long-term contributions and impactful career in education, she was recognized as the 2020 recipient of the College of Education’s Dean’s Lifetime Achievement Award.

An appreciation for the value of education was instilled in Mona Jain early in life.

Jain’s parents, who had three sons prior to welcoming her to the family, believed in providing equal education opportunities for all of their children. It was the life lessons she learned from her mother that stick with her to this day.

“My mom always said: ‘Stand on your two feet. Get an education, because no one can snatch an education from you—no one can steal it,’” Jain recalled. “The more you give, the more it grows.”

This guidance remained with Jain throughout her studies. After earning two bachelor’s degrees from Delhi University in India and beginning a teaching career, in 1964, she received a Fulbright Award that brought her to Riverview High School in Sarasota, Fla. Since arriving in Florida more than 50 years ago, Jain and her family have remained in the area that they now call home. 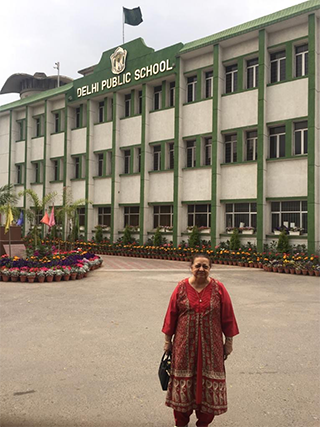 Jain at Delhi Public School in New Delhi, India, where she first started teaching in 1961.

After the completion of her Fulbright, Jain’s career in education continued, and throughout the years she has served as both a teacher and school administrator for American, British and Indian educational systems. While a teacher in schools throughout Sarasota and Manatee counties, Jain taught biological science, health science and physical science at the K-12, master’s and education specialist’s levels.

Jain says her former students regularly tell her she was one of the more strict teachers they had—but her dedication to her students never faltered. When it came to school events like prom or graduation, she was often the faculty sponsor who attended these activities to show her support and encouragement.

“An educator’s biggest reward is knowing that what you did as a teacher, or an administrator or supervisor, is the relationship you foster,” Jain said. “(These relationships) have a direct impact on the lives of the students and community, and it’s really rewarding. You have to be dedicated to it.”

Jain says she’s passionate about mentorship and about helping others move forward in their educational journeys. It’s what’s led her to other opportunities in her career, such as serving on the Florida Governor’s Commission on Education and past-chair and executive board of the Florida Commission on the Status of Women. She was also president of the American Association of University Women and served as Director of Family Health Services for Manatee County’s Head Start program. From 1990-2006, Jain was an administrator and adjunct faculty member at Bethune-Cookman University’s Bradenton campus and at Nova Southeastern University.

As she advanced through all of these roles, a craving for more education continued.

A self-described lifelong learner, Jain holds half a dozen degrees from a variety of higher education institutions, including two bachelor’s degrees, a master’s degree, an educational specialist degree, a doctor of medicine and a PhD.

Of all the credentials she’s earned, Jain says it’s the PhD from the University of South Florida (USF) that is most meaningful for her, because of her family’s passion for the university and commitment to supporting their hometown institution.

At a time when few school administrators held advanced credentials, Jain earned her PhD in interdisciplinary education with a cognate in educational leadership in 1984. She holds fond memories of her years as a student at USF, recalling dinners with her classmates and their significant others at the end of the semester and getting the opportunity to explore a broader outlook within the field of education.

Jain and her husband, Kailash, were early supporters of USF’s Sarasota-Manatee campus and they continue to give back to the university nearly 40 years later as President’s Council Life Members. The Jains have endowed numerous scholarship and legacy gifts to different initiatives at the institution, including STEM programs, Women’s Leadership and Philanthropy, USF Alumni Association, and the USF Sarasota-Manatee campus, USF Athletics and scholarships for first generation students.

Additionally, Jain and her daughter, Anila, MD `81, a graduate of USF who Jain calls “her proudest achievement,” are members of USF Women in Leadership & Philanthropy. Through their involvement in the program, they provide mentorship and support to current USF students, an opportunity that gives Jain the ability to continue her work in motivating people of all ages to continue their pursuit of knowledge. 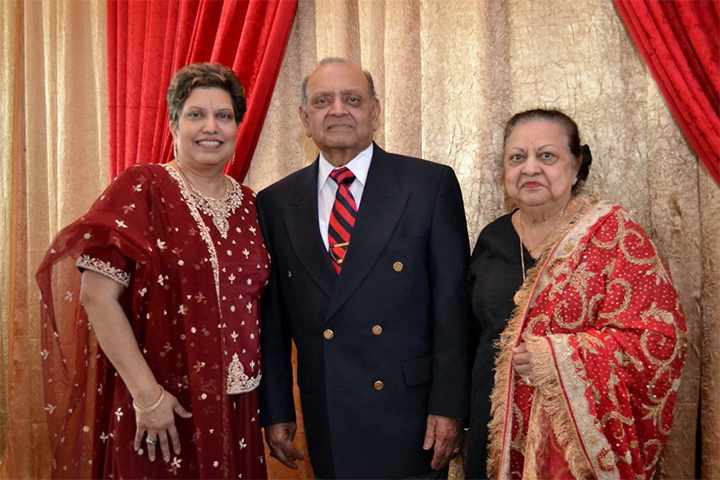 Jain with her husband, Kailash, and her daughter, Anila, who is also a graduate of USF.

“I think that continual learning benefits all facets of our life,” Jain said. “With perseverance, we can achieve any and all goals that we set our minds to—and our hearts to.”

Jain’s earned many recognitions throughout her career. She was one of only 20 women in the nation to receive a community service award from the American Medical Women’s Association. She was also honored with a life membership in Delta Kappa Gamma and Phi Delta Kappa. From USF, she’s received the 1998 USF Sarasota-Manatee Alumni Professional Achievement Award and the 2001 USF National Distinguished Alumnus Award. In 2019, the School District of Manatee County honored Jain by naming a new middle school after her, Dr. Mona Jain Middle School. 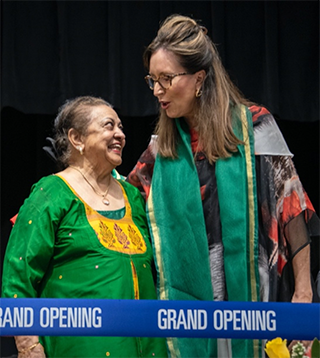 Cynthia Sanders, superintendent of the School District of Manatee County, congratulates Jain at the dedication ceremony for Dr. Mona Jain Middle School, a school named in her honor.

The latest recognition Jain’s received is being named as the 2020 recipient of the College of Education’s Dean’s Lifetime Achievement Award, an honor reserved for those who have demonstrated long-term contributions, achievement and service within the field of education. A proud USF Bull, Jain says receiving this award is personally significant because of her strong connection to the university.

“I am honored, humbled and touched to receive the Dean’s Lifetime Achievement Award from the College of Education—my favorite place at USF,” Jain said. “USF is my hometown university. It has a special significance.”

Looking back, Jain says what’s most important to her has been having the ability to give back—to her students, her alma mater and the greater community. Seeing the long-term impact of her work reminds Jain why she chose to pursue a career in education, because if you’re planning for a lifetime, she says, you educate people.

“On the whole, I think an educator influences the future and as a teacher, you are giving children the knowledge and skills they need to go out into the world and succeed,” Jain said. “I think the joy and the fulfillment you get as a teacher—or I get when my former student would stop me and talk about it—it really makes me proud.”