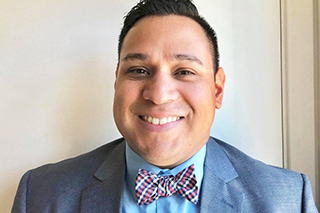 Becoming a school counselor wasn’t something Wilfredo Pena originally set out to do.

After earning his bachelor’s degree in special education from St. Petersburg College, Pena’s plan to continue his studies and work as a school administrator shifted when one of his mentors encouraged him to consider a career in counselor education.

“When I spoke to my supervising professor at the time, she told me, ‘You’re such a people person. Students like you and they respond to you well…I think you’d be a good school counselor,” Pena said. “So, I started to look into it, and I realized that I wanted to help students at a more personal level.”

In 2019, Pena enrolled at the University of South Florida (USF) to pursue a Master of Arts (MA) in Counselor Education. During the program’s orientation, Pena witnessed a genuine passion among his professors who motivated his interest in counseling and reaffirmed his change in career.

Cynthia Topdemir, PhD, a College of Education instructor with 14 years of counseling experience in the Pasco County School District, says there’s one message that she and the rest of the program’s faculty emphasize to students at the start of their academic journeys.

“We always tell our students at orientation to realize that when they’re in the field in this program, they won’t just be working with kids who need a schedule change or kids who just need one-time support,” Topdemir said. “Students in schools are dealing with serious, mental health issues. The reality is, school counselors are doing suicide and threat assessments on a regular basis.”

School counselors support students’ social and emotional learning, their academic progress and career development ― areas that are often left unexplored in the classroom setting. These high-level areas are why the state of Florida requires all school counselors to earn a master’s degree that includes a supervised internship with more than 600 hours of experience working with students and families.

From the moment he began his studies at USF, Pena observed and networked with practicing professionals, an experience that he says, “opened his eyes” to the various responsibilities they juggle throughout the day.

This fall, during his practicum at Madeira Beach Fundamental K-8 School, Pena took on duties such as making classroom observations, participating in parent meetings and advocating for students who need specialized learning plans, such as 504 or individualized education plans (IEP’s). With the support of his supervising counselor, Pena said he’s also organized one-on-one mentoring sessions with at least nine students each week.

“I’ve mostly seen sixth graders come in with bad grades because they’re not used to the system in (middle school) that holds them more accountable with their academics,” Pena said. “This year, I had a student who went from having 3 F’s to having an A, B and C, so having that mentor in school can really make a huge difference.”

While interactions with students have been mostly positive, one student, Pena said, pushed him to self-analyze his approach and share with his peers about how they could improve their counseling sessions.

“I’ve had encounters with one student who sometimes gives me an inch of conversation but then he goes back two inches,” Pena said. “It’s definitely a struggle, but my classmates and I have learned the importance of togetherness. We listen to each other’s session tapes and it’s not just one person giving feedback. It’s all of us working cohesively.”

Counseling during the coronavirus (COVID-19) pandemic has also presented its challenges, Pena said. Though his presence on his school’s campus has remained consistent, staff meetings are held virtually. Most students, whether they’re learning online or in-person, are struggling with the shifts they’ve had to make this school year.

When reflecting on how schools have had to adapt during the pandemic, Topdemir said there are a few areas where students are being impacted.

Given these circumstances, Pena created new supports for his students, such as a counseling group called “The Lunch Bunch,” which welcomes students during their lunch hour to connect with other students and participate in various activities. He also worked alongside his supervising counselor to launch a “Fundamental Success” program for students in need of an academic push.

Throughout his practicum experience and his time at USF, Pena said he’s never doubted his career choice. With plans to graduate in 2021, he’s working on completing the state of Florida’s certification requirements for school counselors and building his confidence as a counselor through his final internship.

His advice for anyone who wants to pursue counseling as a career is to be the kind of person that today’s students need ― someone who is prepared to ensure their success, in every facet of the word.

“You have to be flexible. You have to be present and you have to genuinely want to help people,” Pena said. “Schools are not just a place for learn about math and science, it’s also a place to grow psychologically. Students need that someone who’s looking out for their mental health needs.”

The Master of Arts in Counselor Education prepares future school counselors for employment in elementary, middle, and high schools. The program is designed to produce educationally-oriented counselors with broadly-based, multidisciplinary backgrounds.