Three undergraduate students in the University of South Florida (USF) College of Education were selected for the Spring 2021 Graduation with Distinction Award.

The Graduation with Distinction Award is presented to select undergraduate students in the College of Education who stand apart from their peers based on their academic excellence, professional development, community service or research and scholarship while a student at USF.

Read more about this semester's award recipients below.

As an out-of-state student visiting colleges in Florida, Laura Galle said her first trip to USF’s Tampa campus made her instantly feel like she was home.

“The moment I drove through campus, I knew (USF) was the place that I wanted to be,” Galle said. “It just felt like home. I loved the community, and I loved everything that the university had to offer. I knew as soon as I graduated, I would be prepared for the real world.”

Galle’s decision to major in early childhood education was an easy one. With a lifelong goal of helping others, she knew becoming an educator would be a great way to combine her enthusiasm for giving back with her passion for knowledge.

“I’ve known pretty much my entire life that I wanted to be a teacher,” Galle said. “In high school, I was able to get some practice in working with preschoolers and younger kids. That was something I knew I wanted to do, and I knew that USF was known for their education program.”

Galle’s student involvement activities included the USF Global Citizens Project, GloBull Ambassadors, French Club and part-time jobs through the USF Tutor-a-Bull program and at a local preschool. She is also a member of the College of Education’s SCATTER program and served as president of the organization her senior year. To explore education on a global scale, Galle also participated in a study abroad experience through a USF spring break trip to Paris.

Galle says her favorite parts about her time at USF have been the friendships she’s made with classmates in her program and the hands-on experiences she had through her internships.

“Working with the teachers already in the schools, working with all of those kids—just seeing their smiling faces every day just kind of solidified that this is what I want to do for the rest of my life.”

After graduation, Galle said she hopes to stay in Hillsborough County working in an elementary school. Later in life, she sees herself moving abroad to teach internationally or to work for a nonprofit. She is thankful for the support she’s received from her parents and from SCATTER Director Andrea Thompson, who was both a mentor and a guide during her studies at USF.

“Everything that the university has offered—I could never imagine I would be this prepared for a job after graduation,” Galle said. “I feel like I’ve already been in the classroom for years. I have the community behind me, I have all of the skills behind me, and I think that’s just absolutely amazing.” 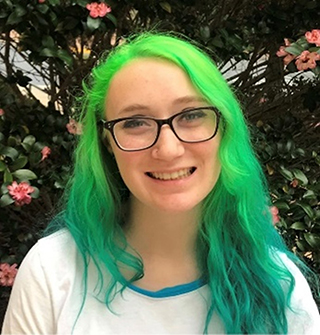 A student with many passions, Delaney Mutchler enrolled at USF as a cell and molecular biology major with plans of becoming a vet and later switched her major to English with a concentration in creative writing.

While considering future career paths, Mutchler says she added English Education as a second major because she has a passion for teaching writing and collaborating with others on their craft. While she has a variety of interests, she says teaching and helping others is the constant that’s driven her future pursuits.

“Connecting my two degrees, I’ve enjoyed learning how to workshop poetry and short stories because those are skills that I can apply in the future when I work in an English classroom,” Mutchler said. “Both degrees have definitely enriched one another.”

Throughout her studies, Mutchler has made the most of her time as a USF student. She was involved on campus through “Come Out of the Dark,” a student organization dedicated to raising awareness about mental health, and as a member of the SCATTER program. Outside of USF, she worked part-time jobs that helped build her teaching skills, such as a tutoring position through USF Athletics and an internship at the Florida Aquarium, where she worked with summer camp programs for kids.

Mutchler’s favorite memories from her time at USF include meeting new people, attending SCATTER events and collaborating with professors and peers in her classes. She’s grateful for the continuous support she’s received from SCATTER Director Andrea Thompson, and also thanks instructor John Williams and Associate Professor Michael Sherry, PhD, for the knowledge they have shared with her as a student in their classes.

After graduation, Mutchler is taking a non-traditional route into the education field. She would love to one day serve in the classroom as an English teacher, but she also wants to pursue a career in zoo education and hopes to apply to graduate schools to study zoology. To get started in the field, she has accepted a role as an education coordinator at the Alligator & Wildlife Discovery Center in Madeira Beach, Fla.

“Ideally, I would do zoo education on the weekends and during the summers and teach (English) in a classroom during the school year,” Mutchler said. “I love animals, and I’ve realized that I’m ready to get back into the science world since I’ve had a little bit of a break, and I realize that while being a vet isn’t for me and that I am an educator, I can still incorporate animals into my world as an educator.”

Amanda Sabean chose to major in Elementary Education because she would not be who she is today without her teachers.

“I was blessed to attend a school where my teachers really cared about me as an individual and they worked hard to see me succeed academically, socially, emotionally, and spiritually,” Sabean said. “I want to help people learn and grow, and where better to do that than in childhood?”

A member of the College of Education’s SCATTER program, Sabean participated in professional development workshops and social activities, and in her senior year became secretary for the organization. Outside of USF, she serves in the children’s ministry of a church near USF’s Tampa campus, where she is a Special Needs Buddy for children with disabilities.

“My internships have been my favorite part of the Elementary Education program,” Sabean said. “I spent a year in a local fifth-grade classroom and then a year in a kindergarten classroom at the same school, and I loved (almost) every minute of it. Getting to know the students, building relationships and progressively taking on more and more teaching responsibilities helped me gain more confidence in myself as a teacher, and when my coursework was challenging and made me want to give up, my field experiences reminded me of why I wanted to become a teacher in the first place.”

After graduation, Sabean plans to enter the teaching profession full-time. She has accepted a position teaching fourth grade math, science and bible studies at her K-12 alma mater.

“I want to thank the ladies of Cohort 6 and our supervisor, Amber, for supporting me and helping me strengthen my teaching practice,” Sabean said. “We've been through a lot together and I feel like I've come out a lot stronger and significantly more prepared to step into my own classroom, especially knowing I have a support system to lean on when my first year inevitably gets rough. Thank you to my family for putting up with my venting, crying, ramblings and excited shouting for the last three years. I'm sure there will be plenty more to come once I begin teaching in the fall.”