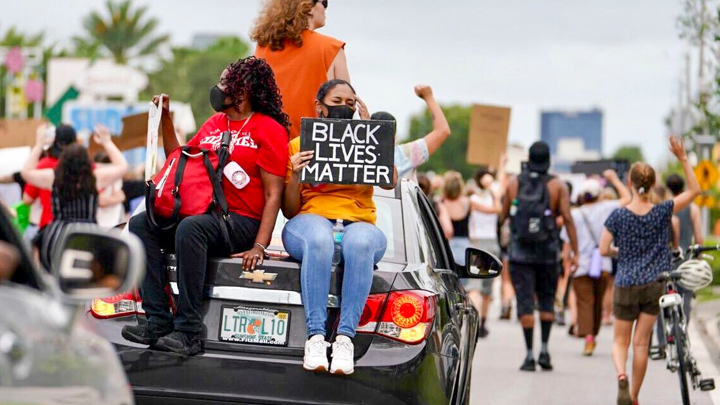 Photo: Protestors took to the streets of Tampa and St. Petersburg in June in this photo originally published in the Tampa Bay Times. USF criminology researchers are working with a variety of stakeholders to improve community-police relations. [Martha Acensio-Rhine ’19 | Tampa Bay Times]

THE DEATH OF GEORGE FLOYD at the hands of police in Minneapolis has shined a theoretical multi-angular mirror on society and how it interacts with law enforcement, especially in Black communities. Concerns with police militarization that have grown over decades are even more pronounced today as that trend has become increasingly apparent nationwide during protests against police brutality.

USF Associate Criminology Professor Bryanna Fox has spent much of her career studying policing and crime prevention. She’s found that military-style uniforms and equipment, such as M4 assault rifles, flashbang grenades and armored vehicles, can undermine civilian trust in police. In a recent study published in the Journal of Research and Crime and Delinquency, Fox and her USF colleagues Richard K. Moule, Jr., and Chae Jaynes found the more people trusted the police, the more likely they were to empower police, and be supportive of them using military weapons and tactics.

“Our findings underscore the need for police to cultivate trust in the community,” Fox says, “particularly as increases in trust were associated with increases in support for police, across people of all races and ethnicities.”

Fox has also played a pivotal role in the Tampa Police Department’s efforts to improve community relations. She was selected to make recommendations based on feedback from members of the newly formed Mayor’s Community Task Force on Policing, which represents a variety of key stakeholders, including Black Lives Matter, the NAACP, business owners, neighborhood associations and churches.

She and 12 USF graduate students met several times with the 40-member task force to help better understand public perceptions of the Tampa Police Department. They asked questions that pertain to how much task force members trust the police, if they fear police and if they feel officers need more or fewer resources to effectively do their jobs. They also gathered feedback on policing tools, such as the use of body cameras, facial recognition software and other tactics used to monitor areas with high crime rates. Additionally, the team spoke with law enforcement officers on their interactions with the community, perceived tensions and how they’re individually impacted by department policies and resources.

Criminology Professor Lorie Fridell is a top expert in the nation on biased policing. She has created the Fair and Impartial Policing training program that educates law enforcement on implicit biases and provides them with skills for producing impartial policing. Fridell recently expanded the program to address the issue of police being called to a scene by a community member who is frightened or uncomfortable because a person of color is wearing a protective COVID-19 mask. She analyzes the killing of George Floyd in Minneapolis through the lens of what social psychologists label “outgroup bias.”

“The ultimate outgroup bias is dehumanization,” reports Fridell. “The policing profession, unlike others, can lead officers to see members of certain groups as something other than ‘humans like them.’”

James Unnever, professor of criminology at the USF Sarasota-Manatee campus, has written several books and published dozens of academic articles on how racism increases the likelihood that African Americans will engage in problematic behaviors, including crime.

“The relationship between racial discrimination and crime occurs even if African Americans vicariously perceive racial discrimination such as witnessing the murder of George Floyd and others,” Unnever says. “Racism is related to crime because it undermines the ability of African Americans to bond with conventional institutions, diminishes their self-control, and enhances their likelihood of experiencing crime-producing emotions such as anger and hostility. My research also suggests that criminal justice injustices are an especially crime-causing form of racism.”

Psychology Professor Edelyn Verona has published several studies on violence and its relation to experiences of threat. She’s found exposure to stress leads to aggression, especially in men, and the experience of stress can degrade self-control or promote impulse responses, such as the looting and destruction that occurred in May following a series of peaceful protests throughout Tampa Bay.

“The combination of recent stressors related to COVID-19 and a history of trauma that many in the Black community have experienced, especially in regard to law enforcement, are making people more hypervigilant and on edge,” Verona says. “In that state, the threatening view of police in riot gear would trigger a defensive response and possible desire to retaliate.”

“Historically, we repeatedly bear witness to Black people’s outrage against police violence as a catalyst for public protest. However, these protests have never been about police brutality alone,” says David Ponton III, assistant professor and historian of Africana studies. “Whether during the race riots of the World War I era, on college campuses in 1967 and 1968, after Rodney King’s torture in 1999, following Mike Brown’s death in 2014, or today in 2020, Black Americans have expressed their grievances regarding the unequal distribution of economic and political resources and the ways policing works, institutionally, to sustain that unequal order.”

Additionally, Ponton emphasizes research that has found Black Americans who are exposed to news about police killing an unarmed Black person report high rates of poor mental health in the weeks and months following the news. He says this contributes to chronic stress, making them more susceptible to hypertension and its comorbidities, ultimately reducing the length of Black lives.

The book “The Color of Love” by Elizabeth Hordge-Freeman, associate professor of sociology, exposes how one of the most pernicious consequences of racism and white supremacy is how Black families feel compelled to prepare their children for racism.

“Black mothers’ fears lead them to limit their children’s behaviors and movements as an attempt to protect them from racial profiling,” says Hordge-Freeman, who recently was named senior advisor to the president and provost on diversity and inclusion. “Unable to change society’s anti-Blackness, some may also try to modify their children’s racial appearance in ways that may, unfortunately, reinforce racial stigma and lead to painful experiences.”

USF recently announced it will embark on a year-long series of research projects exploring the perpetuation of systemic racism in society that has resulted in economic inequities, social injustices, police violence and other issues. The $500,000 fund jointly established by the Office of the Provost and USF Research & Innovation will support the first round of projects designed to create deeper understanding of these complex problems while forging solutions and productive community partnerships.

The effort is guided by a newly formed task force of USF faculty and staff from campuses in Tampa, St. Petersburg and Sarasota-Manatee, known as the USF Research Task Force on Understanding and Addressing Blackness and Anti-Black Racism in our Local, National and International Communities. The task force will aim to support research proposals that include community-based projects and programs, and projects that are positioned for sustained, external grant funding from local or federal agencies, corporate partners or other private sector foundations. It was prompted by several factors, including the disproportionate impact of COVID-19 on the nation’s Black communities and long-standing issues of racism and institutional violence brought to the forefront by the recent deaths of Black men, women and children due to excessive force from law enforcement.

Various groups throughout Tampa Bay and nationwide are calling for less use of force and more community-oriented policing. Many have stated they’d like to see funding shift to social service agencies equipped to respond to nonviolent police calls related to mental health and substance abuse. The Pasco County Sheriff’s Office addressed similar concerns last fall when it launched the Behavioral Health Intervention Team. Fox has been actively involved in developing programs that offer treatment and prevention services to justice-involved citizens, and is in the midst of a long-term research effort to reduce jail populations.

“The benefits of implementing evidence-based interview and prevention programs are enormous,” Fox says. “Not only do they help to reduce crime and burden on police, they also help to improve relations with the community, reduce victimization, save taxpayers money and potentially break the cycle of crime that many get wrapped up in.”

Fox hopes to utilize her experience in Pasco County and from other collaborations with law enforcement agencies nationwide to assist Tampa Police in developing solutions that address community concerns with the current policing method.