Public Health Student Brings Hope to Those Who ‘Really, Really Need It’ 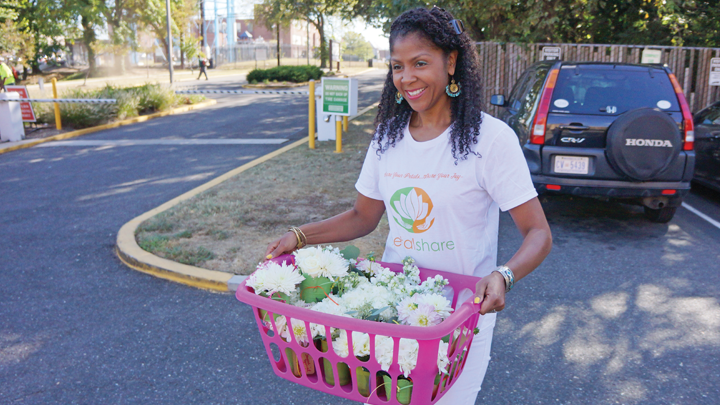 WHEN COVID-19 STRUCK, Heather Lawson, a doctoral student in USF’s College of Public Health, figured her volunteer organization, Petal Share, would have to go on hiatus.

Lawson – a busy civil rights attorney with the Department of Health and Human Services in Washington, D.C. – and her crew of volunteers (whom she lovingly calls “pollinators”) solicit flower donations from wedding venues, event planners, corporations and hotels to rearrange into bouquets and hand out at hospitals, nursing homes and shelters. It’s a group she started in 2013 after watching a weddings-of-the-rich-and-famous reality show.

“This one show featured a couple who had spent hundreds of thousands of dollars importing tulips from Holland,” says Lawson, who’s concentrating in advanced practice leadership in public health. “While I was watching it, I had a sudden thought: What happens to all these hundreds of thousands of dollars of flowers after the event is over? Could I get them into the hands of people who could really use them – people who are sick or isolated or in need of cheering up?”

The answer was yes.

After blindly tracking down flower sources via email, social media and friends of friends, Petal Share was born. But with large-scale events now postponed or canceled thanks to COVID-19, Lawson’s flower donations have shriveled up.

“Everything was shut down,” she says, “and I kind of accepted that as a reality. I went about my days like everyone else, looking for toilet paper and paper towels and taking care of me and mine. But as we got more and more into the pandemic, I kept coming back to the reason why I started Petal Share in the first place. I never wanted people to feel isolated. I never wanted people to feel like they were forgotten. I started shaking some trees, sending messages to florists and partners we had in the past, asking if they had anything, any flowers at all.”

Lawson got a bite from a flower wholesaler who had to shut down temporarily. After a local florist hand-tied the flowers into individual bouquets (Lawson, admittedly not an expert flower arranger, says she’s grateful for any professional help she gets) and the Petal Share crew disinfected them, they had to find a facility that would accept the flowers amidst the lockdown. “I’m a public health professional,” Lawson says. “I absolutely wanted to minimize risk.”

Masked, gloved and with boxes sanitized with disinfectant, Lawson – who has had five family members suffer with (and recover from) COVID – found a shelter for domestic violence victims willing to take the group’s bouquets. “I rang the doorbell and a worker came outside and took the box,” she says. “We followed all the CDC safety protocols and stopped to take one socially distanced picture.”

Since then, Lawson has received more donations, including flowers from couples who had to cancel their weddings due to the pandemic. “They wanted to share the joy of their wedding, even though they couldn’t really celebrate,” Lawson says. 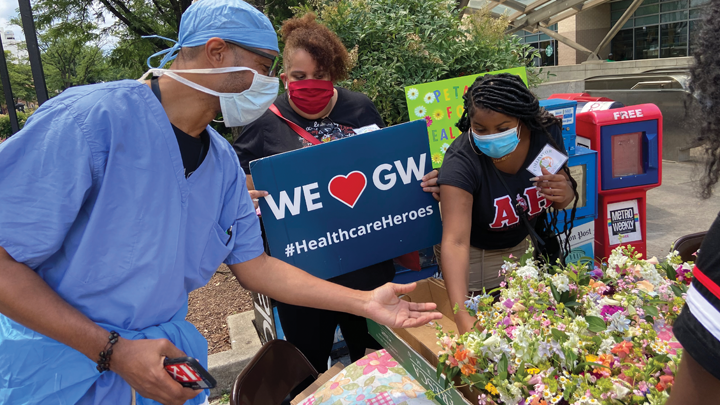 She and her pollinators – again, masked, gloved and appropriately social distancing – recently set up shop outside George Washington University Hospital, where they shared flowers with health-care workers and hospital staff. “You know, my feeling is that these people are our heroes and heroines,” she says. “They take care of us when we are at our worst. And even though they’ve been celebrated before, I just don’t think you can celebrate them too much.”

As COVID rages on, it doesn’t look like things will be coming up roses for Petal Share anytime soon. With big events on hold indefinitely, donated flowers will continue to be in short supply. But that won’t deter Lawson and her volunteers. After all, if ever there’s a time when people need a bright spot in their day, it’s during a pandemic.

“Flowers have an immediate and long-term positive effect on people,” Lawson says. “They’re natural mood boosters. They can decrease depression and promote social interaction. Sharing flowers, particularly with people who are elderly, sick or incapacitated in some way, is one of the best preventive health measures you can take, and creating ideas and innovations to prevent getting sick is what public health is all about.

“I’ve seen the way women in battered women’s shelters respond when we deliver flowers to them on Valentine’s Day. They’re asking themselves, ‘Do I matter? Am I forgotten? Who loves me?’ Petal Share has been there to say, ‘We remember you. We love you. Yes, you matter.’ It may sound like hyperbole, but I’ve actually heard people say these flowers have saved their lives. Petal Share is about bringing a little hope, a little joy to those who really, really need it.”