Growing with the University 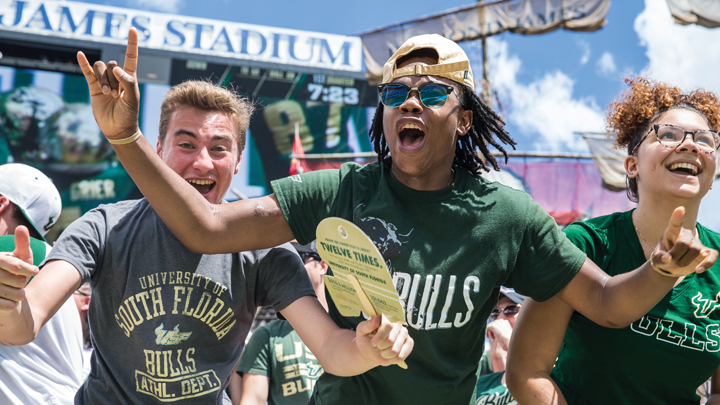 WHEN THE FIRST BLOCKING SLED ARRIVED on Fowler Avenue, USF and the Tampa Bay area already were pointed toward prosperity. Then it became a full sprint.

USF football, the program that went from trailers to the nation’s No. 2 ranking in just a decade, once seemed to be advancing at an unusually rapid rate. It was a perfect fit for their region, where explosive growth has become a way of life.

Over the last 25 years, USF’s enrollment has increased by nearly 39 percent, surpassing the 50,000 mark, and its student population has become more diverse. USF’s economic impact on the state of Florida has grown to $6 billion and its fundraising arm now generates $119 million in annual donations, an increase of 284 percent from a quarter-century ago.

USF’s Tampa campus has added more than 7 million square feet of new buildings and facilities. In 2018’s crowning achievement, USF was designated as a Preeminent State Research University (one of just three in Florida). That distinction attracts more prestigious faculty, while increasing the level of research and the value of a USF degree.

President Emerita and Professor Judy Genshaft, who served from 2000 to 2019, says “They used to dismiss us as a commuter school.” Now we have a level of sophistication and accomplishment that nobody else predicted. I felt this was achievable with some polishing and direction.

“USF is now a first-choice destination. It’s a prideful place. It’s really the place to be."

Over the last 25 years, Tampa Bay’s population has increased by 31 percent, reaching 3.2 million in the four-county area defined by the U.S. Census Bureau. The $200 million, 26-story JW Marriott highlights a fleet of new hotel properties in Tampa, while the $550 million Midtown residential/business compound and the Sparkman Wharf waterfront entertainment complex have provided new recreation options.

Meanwhile, the Tampa Riverwalk along the Hillsborough River has opened up downtown to visitors and locals with a 2.7 mile picture-postcard link between restaurants, hotels and attractions. There’s also the sprawling Water Street Tampa, a downtown community and city unto itself, which includes residences, offices, hotels, restaurants and retail stores.

Nearly 16,000 people now live in downtown Tampa and that is set to continue to grow. Shortly after the millennium, Tampa’s downtown residential population was about 800.

“Four hundred of them lived at the Morgan Street Jail,’’ says Bob Buckhorn, who was Tampa’s mayor from 2011 to 2019. “Our downtown was desolate. You could fire a cannon down Franklin Street and hit nothing. You talk about change. It’s hard to recognize our downtown and skyline these days. It’s a radically different, very exciting place.

“It’s invigorating to see all the young people we are attracting to downtown Tampa and our area as a whole. Over the last 10 years, they decided they don’t need to go to Austin or Charlotte. USF has a lot to do with that. We have a bunch of bright young people who graduate from USF and stay here because they love it and professional opportunities are here. It all provides an energy and vibrancy that didn’t exist before." 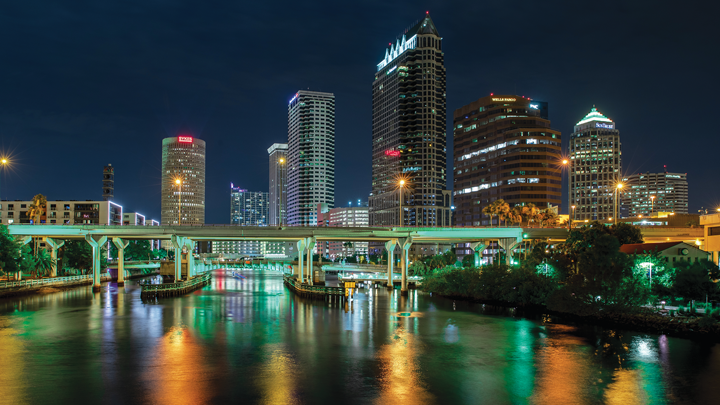 Supporters from throughout the Tampa Bay region lit up iconic structures in green and gold to honor the spring graduating class of 2020, whose in-person commencement was cancelled due to the coronavirus pandemic.

Resonance Consultancy — a tourism and economic development agency that considers population, workforce growth, infrastructure, the economy and leisure options — just ranked Tampa as the best city in Florida and 22nd best in America.

People are noticing. One of them is Jeff Scott, USF’s football coach.

“Our location is incredible and such a huge advantage for us,’’ Scott says. “Our players put in hard work in the classroom, weight room and field. But it’s important to me that they enjoy their time in college.

“With the beaches, the attractions and the restaurants we have here, it’s an awesome place. And if you like sports … wow!"

Tampa just hosted its fifth Super Bowl, which was won by the hometown Bucs. The Tampa Bay Rays were 2020 American League champions and nearly captured the World Series. The Tampa Bay Lightning wrapped up their second straight Stanley Cup. Championship boat parades have become a regular sight on the Hillsborough River.

Once, a Tampa teenager named Dick Greco loaded up his bird dog in the family’s Model A Ford and headed north of town to hunt quail. “Nothing there but farms, fields and wide-open spaces,’’ says Greco, a future four-term Tampa mayor, whose hunting site was located on land where USF’s campus now stands.

Tampa was a port city, a place of cigar factories and citrus groves. The local sports scene consisted of spring training, University of Tampa football, stock-car racing and the annual Hillsborough vs. Plant “Turkey Day Game’’ on Thanksgiving Day at Phillips Field.

When ambitious city fathers built Tampa Stadium in 1967, then attracted an NFL expansion team that became the Bucs, things were forever different.

In turn, the 1997 addition of football has raised USF’s profile.

“Some Tampa people called me the president of ‘that university out there,’ like we were in Georgia or something,’’ says Betty Castor, the USF president from 1994 to 1999 and a key figure in football’s approval. “We don’t hear that anymore. USF means a lot more to our city, county and region. Football was a big part of it. It helped to forge our identity and it brought the alumni closer to their school."

“I thought the university would grow substantially and football helped to make that happen," says Frank Borkowski, the USF president from 1988 to 1993 who presided over the school’s first football feasibility meeting.

“There wasn’t a lot of school spirit. More than anything, football bound everyone together."

USF’s expansion has mirrored the growth throughout Tampa Bay.

Greco remembers wondering about the design of Tampa International Airport, which opened in 1971. It had a landside terminal, connected by people movers to four satellite air terminals, a design that was well ahead of its time.

TIA has consistently ranked among America’s best-performing and most-loved airports. In 2019, it had 22 million passengers.

“People want to come here,’’ Greco says. “I talk to people all the time who had moved here and they wish they would’ve done it years earlier. We have everything that makes a place complete — and a huge piece of the puzzle is having a world-class university. We love all that USF has meant to us."

That area-wide affection is evident when the Bulls play football.

How USF has changed and grown since the introduction of football in 1997.