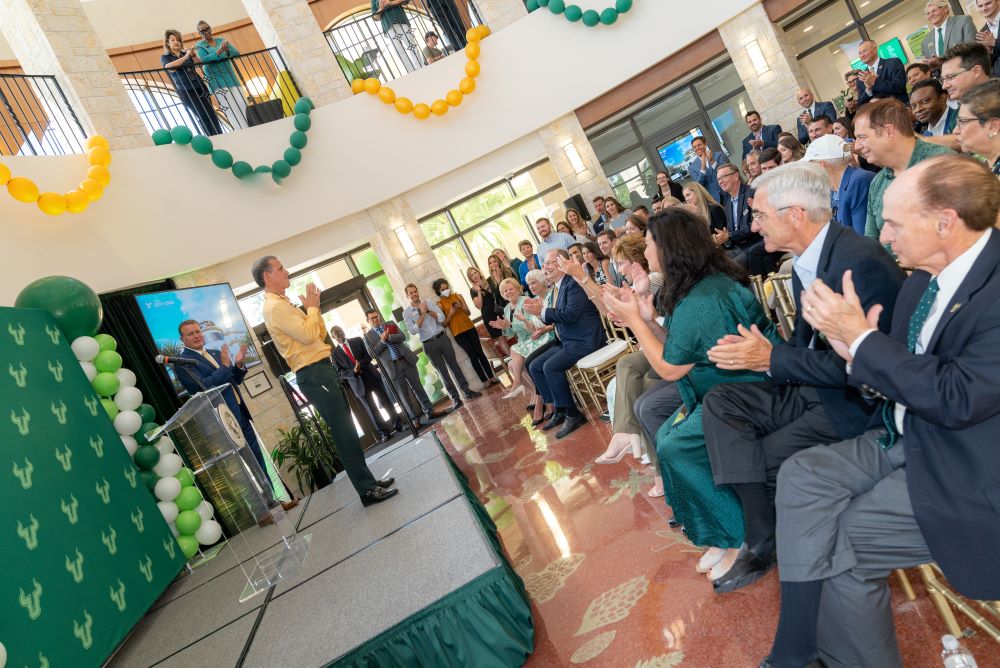 SARASOTA – Wednesday was a monumental day for the University of South Florida’s School of Risk Management and Insurance.

Not only did the school receive a major financial boost from Baldwin Risk Partners, a Tampa-based insurance distribution firm, totaling $5.26 million, but USF leaders also announced the school will be named after its generous donors.

The new Baldwin Risk Partners School of Risk Management and Insurance is poised to propel the program into an academic powerhouse and fill the employee shortage within the state’s vital insurance industry that is hungry for talent.

“Today will be remembered as the first step in moving USF’s risk management and insurance program toward becoming a state and national leader, uplifting the entire industry and reducing the talent gap that currently exists,” said USF President Rhea Law. 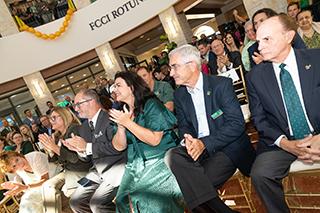 “It’s really going to fuel our trajectory, our upward momentum,” she said. “This really puts an exclamation point on that. We think this investment is going to increase the visibility of the program.”

The insurance industry’s talent gap is fueled by an aging workforce and the lack of higher education programs specializing in the field. The number of insurance employees over the age of 55 has increased by 75% in the past 15 years and is nearly 30% higher than in other industries.

Aside from USF, only one other public Florida university offers a full major in the discipline. In addition, there are only 10 large risk management and insurance programs nationwide, with each graduating about 50 people each year.

Karen A. Holbrook, the USF Sarasota-Manatee campus regional chancellor, said the gift provides crucial support to help grow a vital program that is in its infancy. Also, she is excited to have the campus take the lead in addressing the critical talent shortage in the industry. 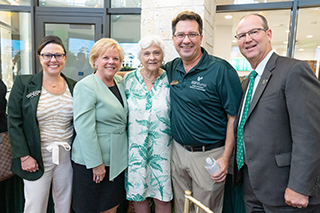 “Our local insurance professionals and community partners have helped build the foundation for the School of Risk Management and Insurance,” she said. “We are thrilled to have the support from Baldwin Risk Partners to expand and elevate the risk management and insurance program on our campus and throughout USF.”

Data shows graduates majoring in insurance command higher median salaries two years after graduation than students from the same universities who major in other business disciplines, such as management, marketing, finance, or accounting.

The school is one of six schools within the Muma College of Business. While the school is based on the Sarasota-Manatee campus, the gift will serve risk management and insurance programs on each of USF’s three campuses. When USF consolidated its three campuses in 2020, the Muma College of Business created the School of Risk Management and Insurance.

The gift will provide scholarships to attract students to the major as well as resources to support their engagement with industry leaders with case competitions. As it grows, the school will hire additional faculty scholars to teach in the program as well as conduct scholarly inquiries into emerging opportunities. The gift will also support industry-education outreach.

Lowry Baldwin, chairman, and co-founder of Baldwin Risk Partners said insurance is a key industry in Florida with an aging pool of professionals and a talent gap. He said he hopes the gift and the firm’s partnership with USF will attract and develop the next generation of insurance industry leaders.

“We are manically interested in developing the right culture. Fundamentally we are in the relationship business,” he said. Baldwin said he is excited to “activate the partnership” and give students great insight into the insurance industry. 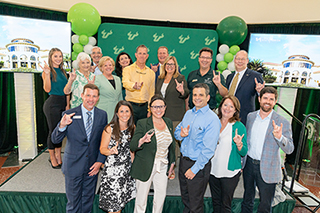 “We’re proud to support the risk management discipline through this partnership to develop a world-class educational program,” said Baldwin. “This investment will broaden awareness of the diversity of career options available within this field of study.”

Baldwin is a fourth-generation Tampanian with deep ties to the community. Tampa’s Lowry Park Zoo, now Zoo Tampa, was named for his grandfather and his mother was the first woman to serve on the board at Tampa Electric Company. The Baldwin family includes several USF alumni.

“This is a watershed moment — and that is not an exaggeration, “ said USF Muma College of Business Interim Dean GJ de Vreede. “Today is the start of a turning point. A moment where, in a few years, we look back and say, ‘This is the moment that put USF’s School of Risk Management and Insurance on the map in the Tampa Bay region.” 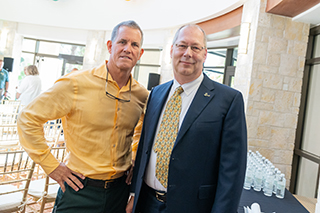 “Today we are celebrating a gift that supports the college’s vision to grow the school into a powerhouse in risk management and insurance education,” he said.

Katherine Robertson, a USF risk management and insurance student, said the gift will open doors to her, her classmates, and future insurance students by providing more internships, access to world-class professors, and opportunities to network with industry leaders.

“This gift from BRP is going to provide new opportunities for some of my classmates and for future Bulls who may be interested in risk management and insurance,” she said.

“Honestly, sometimes insurance can get a bad rap, especially in Florida,” she said. “Yet, risk management is pertinent for people and companies alike to curb loss exposures. I cannot wait to earn my degree and work in an industry that is far more diverse than insuring cars and property. It’s about putting people’s minds at ease for the worst-case scenario."

School of Risk Management and Insurance