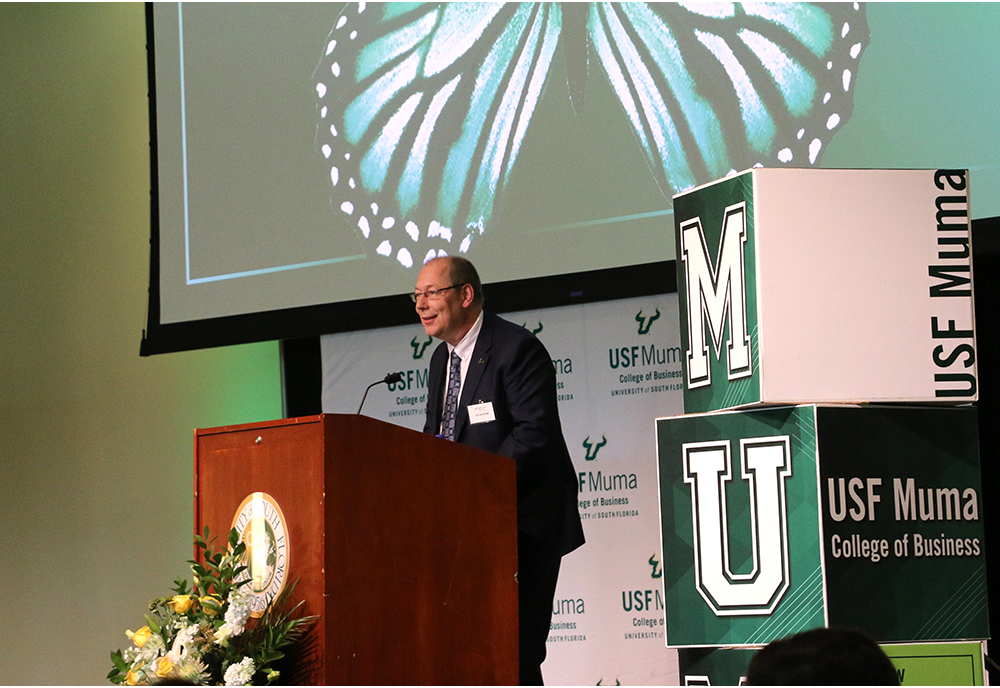 The celebratory luncheon, held on Friday, hosted a packed crowd of 400 people at the Marshall Student Center ballroom. The annual gathering is a chance for donors to meet the students who have benefitted from their generous awards. It’s also an emotion-packed event where attendees hear the personal stories of struggles and triumphs from former and current scholarship recipients.

The college awarded nearly $1 million in scholarships to about 200 business students from all three campuses — a record for the business college. The event is one of the college’s signature events that shines the spotlight on its commitment to student success.

“This is an absolute record and we are just blown away,” said GJ de Vreede, interim dean of the USF Muma College of Business. It was de Vreede’s first scholarship luncheon since being appointed interim dean following the exit of former dean Moez Limayem, who left last month to be president of the University of North Florida.

“I’m going to text Moez, by the way. We are not competitive at all,” he joked.

A callback to shoes, then butterflies

The one-hour event began with Renata Gomes Martins’ black pumps sitting atop a lighted crate on stage — a callback to the 2019 scholarship luncheon where Gomes Martins was a speaker and was surprised with a visit by her parents who flew in from Brazil — and ended with a release of hundreds of awakened butterflies outside the Marshall Student Center.

During the luncheon, one lucky student won a $1,000 gift card from Southwest Airlines thanks to the luncheon sponsor, the USF Federal Credit Union. Advertising student Nia’Symone Francisco performed a dramatic and inspirational spoken word poem titled “The Shift.” Three stilt walkers dressed as butterflies unfurled their wings near the stage as de Vreede likened the university to a safe place that prepares students for something bigger. 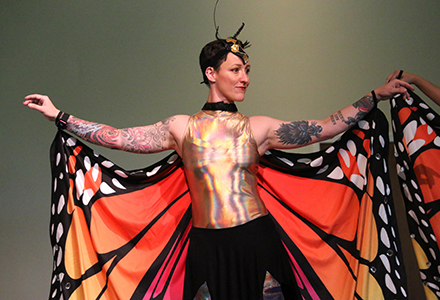 “Like a butterfly’s cocoon, this university is a place where students can grow, in safety, where they can radically transform their skills and minds, and when they are ready, emerge as something beautiful, someone ready to take flight and to follow their dreams,” he said.

Watch for the little moments

The event’s first speaker was alumnus Julian Ossa, who shared a moving story about growing up in the early 1990s in Medellin, Colombia during the drug-cartel-run Escobar years. His mom was pregnant with him at age 18 and his biological father was murdered by the cartel before he was born.

He took the name of a charismatic cab driver, Freddy Ossa, who became a mentor, a friend, and a father. At age 10, he and his family fled the violence in Columbia by moving to Tampa.

At age 16, his father saw that he was interested in understanding money, so he gave him the book “Rich Dad, Poor Dad” by Robert Kiyosaki, he said. 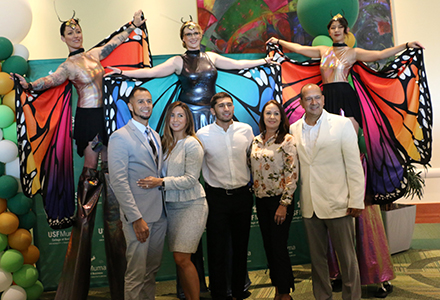 “I read the book cover-to-cover while working at a car wash in New Tampa,” he said. “I spent the rest of the summer reading similar books during my breaks. I had to figure out how to go to college. Reading these finance books taught me that it is difficult to budget your way to economic stability.”

After high school, Ossa attended Hillsborough Community College through a Florida Bright Futures scholarship. He transferred to USF and during orientation, had a life-changing moment when he learned about the college’s Corporate Mentor Program.

“The Corporate Mentor Program was designed for people like me — students who are the first in their families to attend college, students who are willing to put in the work outside the classroom, and students who want to learn how to network,” he said.

That program reshaped his life because the skills he learned there prepared him for the scholarship luncheon in 2011. At that luncheon, Ossa connected with donor John Townsend, the Tampa leader of T. Rowe Price, who became a mentor to him. That mentorship led to an internship, which opened doors to even more opportunities.

Today, Ossa works at Truist as a financial advisor and assistant vice president. He said their practice manages branches with more than $150 million. He thanked Townsend, who was not in attendance, for being a mentor, work manager, professor, and friend to many in the room.

“That one little action, that one nudge, that one moment of encouragement, although small gestures at the moment, those little moments are the ones that make the big magic,” he said.

Ossa had this message for the scholarship recipients in the audience: “Do more than is required and watch for the little moments as you continue college. For those are the ones that help your life take flight.”

From homelessness to self-healing

The luncheon’s featured student speaker was Junayed “JJ” Jahangir, a student on track to earn dual degrees in finance and accounting and to graduate with honors in December.

While he’s had many successes at USF — he learned from internships at EY and Tech Data, served as Student Senate President, graduated from the inaugural class of Tampa Chamber’s Collegiate Leadership Program, and was a 2022 Muma College of Business 25 Under 25 honoree  — he spoke about the winding, sometimes the arduous path that he took to get there.

Jahangir was born and raised in Bangladesh, a country where “life was always rough,” he said. 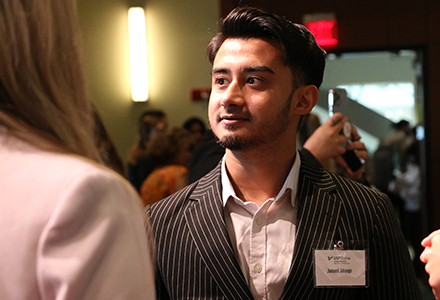 But he said life in the U.S. was not easy either and shared some of his darkest times as a student. In 2020, he was technically a homeless USF student because he couldn’t afford a place to live and was sleeping on a futon at a friend’s apartment. He got two jobs and was able to pay for an apartment, but that didn’t last.

“As the pandemic hit, I lost both my jobs and my homelessness continued as I couldn’t afford to pay rent,” he said. “I barely had food and lived on instant cup noodles for days just to save money for textbooks. I wouldn’t recommend that, by the way,” he joked.

He slept in a back room of a gas station where he worked. Jahangir was able to get two jobs again and had rent money for another apartment. Unfortunately, that bit of good fortune was short-lived.

He learned his parents, still in Bangladesh, caught COVID-19. His father had a preexisting heart condition and his mother was in the ICU holding on for her life. Since the border was closed and travel was limited, he couldn’t go home.

After his parents survived the worst of COVID, he started his journey of self-healing. He meditated. He went to the gym every day. He lost 30 pounds in three months.

His persistence paid off. He finished an 18-credit semester with all As, started working on his start-up which was selected for the USF Student Innovation Incubator program, and was awarded the prestigious Golden Bull Award.

“I have learned that the most important step one can take is always the next one. And gifts like the ones being recognized here today help students like me move forward,” he said. “Life is all about choices. Next time you feel like you are trapped in a cocoon, ask yourselves, ‘Will you stay in the darkness, or will you crack the cocoon open and give rise to a pair of conquering wings?”

The event concluded with attendees taking photos with the butterfly stilt walkers and then releasing hundreds of butterflies into the afternoon sky.