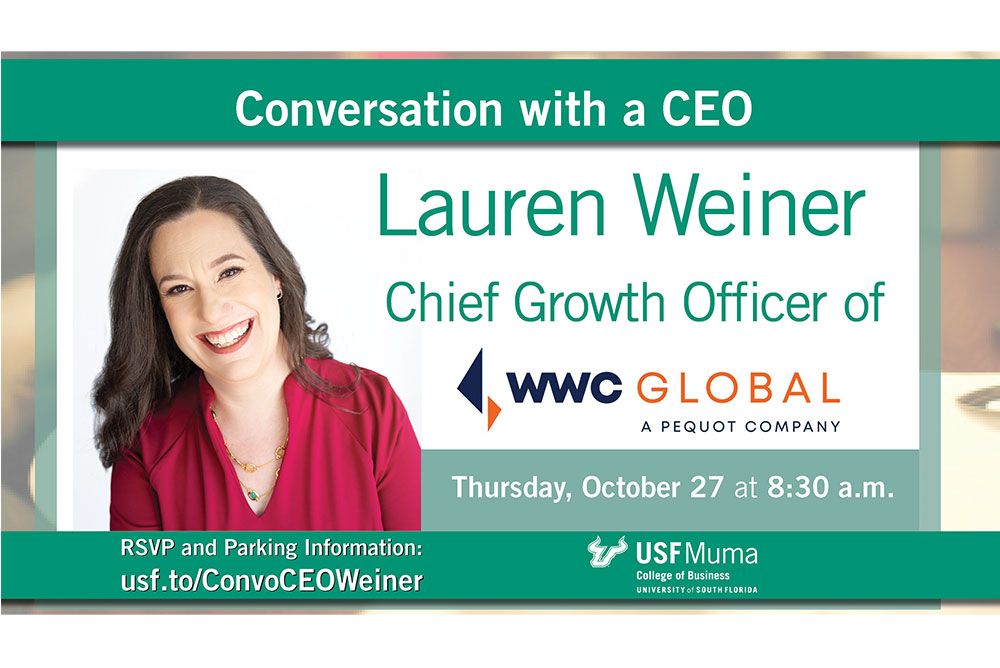 Lauren G. Weiner, co-founder of WWC Global, to be the next guest at the Conversation with a CEO series

TAMPA – The former CEO and owner of the largest woman-led federal contracting firm in Tampa is set to share her story and the lessons she has learned building a multi-million dollar consulting company at the next USF Muma College of Business’s Conversation with a CEO series.

Lauren Weiner will be the special guest when event returns on Oct. 27. The event is free and open to the public. Registration is required. To register, click here.

In August, WWC Global was acquired by Command Holdings, a holding company owned by the Mashantucket Pequot Tribal Nation. The WWC Global team became a part of the Command Holdings companies and Weiner transitioned to a new leadership role as the chief growth officer.

Weiner founded her consulting firm, with business partner Donna Huneycutt, while they were stationed overseas with the Department of Defense. The firm was established to provide professional opportunities for experienced military spouses that were unable to obtain gainful employment because of bureaucratic constraints prohibiting local hires. Shortly after incorporating, the company landed a short-term contract in the Anti-Terrorism/Force Protection Office on the military base in Naples, Italy.

The firm grew to more than 30 consultants over the next few years and continued to win significant contracts with the Department of State, USSOCOM, and USAID.

Weiner said she never considered herself an entrepreneur, but one of the keys to entrepreneurial success is finding a support network where others are there to cheer you on with no animosity or irony.

“Success like this is very hard. It’s very lonely. Finding your village and having a network that will support you and where you can be vulnerable is crucial,” she said.

The Conversation with a CEO format is casual as Interim Dean GJ de Vreede chats with guests about their background, careers, and leadership philosophies. The event will take place in the Center for Advanced Medical Learning and Simulation, 124 S. Franklin St., in downtown Tampa, from 8:30 to 10 a.m.

Prior to WWC Global, Weiner worked in the White House at the Office of Management and Budget in the Executive Office of the President. Under two different presidential administrations, she oversaw policy development, implementation and performance assessment for multiple federal agencies.

She earned a bachelor’s degree from the University of Michigan and a PhD from Dartmouth College.

Weiner currently serves on the Board of Directors for the St. Joseph/Baptist BayCare Hospital System and the Tampa Bay Chamber of Commerce. She has been a keynote speaker at the Military Influencer Conference, the Working Women of Tampa Bay annual conference, the Military Women’s Conference, and various Hiring Our Heroes events across the country.

Learn more about Weiner, her career, and influence in the Tampa Bay community at the Conversation with a CEO. To register, click here.